Three-fourths of the population resides in urban areas which range in size and character from isolated communities of 2,500 residents to such a massive sprawling megalopolis as New York City. Politics, in its broadest sense, deals with the structure of government, the factors which determine this structure, the methods of public decision making, the administration of these decisions, and the problems with which they deal. Urban Politics in America is addressed to all these aspects of politics in all types and sizes of urban communities.

Don't use plagiarized sources. Get your custom essay on
“ New York City ”
Get custom paper
NEW! smart matching with writer

It yields a number of insights into this diverse and complex subject but falls short in the larger task of providing an interpretive framework for analysis. The book opens with a ritualistic review of the history of the city and a discussion of the differing perspectives of the various social sciences. Having paid homage to the sacred cow of urbanologists, the systems approach the author proceeds into his political analysis, which incorporates only the most superficial references to economics, sociology, psychology, and demography.

Substantive discussion begins in the second chapter, which is devoted to the city state relationship.

The legal status of local government is discussed, contrasting the ideas of home rule and state sovereignty. The conclusion is the pragmatic considerations have carried the day, and that city governments have been delegated certain rights and responsibilities based on the functions they perform most effectively. Though there is some discussion of the problem of rural overrepresentation in state legislatures, the conflicts between mayors and governors and the different perspectives they may have on a wide range of issues are ignored.

The relationship between the cities and the Federal Government is examined next.

The growth of direct federal to city ties is reviewed. Political, bureaucratic, and programmatic interrelationships are discussed, providing a useful framework for further analysis. The book turns next to a broad brush analysis of metropolitan problems. The balkanization of metropolitan governments including the effects of suburbanization receives close attention. The financial and administrative problems which beset local governments and special districts are analyzed, along with various solutions such as annexation, the creation of metropolitan governments, and the purchase of services from the central city, Dr.

Baker suggests that reform in the structure of government, and that the existing pragmatic agreements between the diverse local governing units are crudely effective. Turning to politics, the author argues that the nonpartisanship of most local elections does not make them apolitical. Neither, he claims, does partisanship weaken the fabric of local government, despite the fears of reformers. The days of the political machine have been ended in most cities, with the institution of civil service and other reform measures.

But there is a new style of leadership which recognizes the pluralism of its constituency, and it is inherently “political”. The idea of power elite is generally discounted, especially for larger cities, where the growth countervailing power groups has lead to the rise of politicians who can compromise competing interests. The structure of local government is then examined, comparing the relative merits of the strong and weak mayor, the council manager, and other systems. The local judiciary is discussed in terms of its impact on local policy, an interesting aspect of urban politics which often ignored.

The impact of the administrative bureaucracy is also analyzed, along with the effect of unionization among public employees. Finally, the financial aspects of local government are discussed. The liturgy of woes is familiar: costs are spiraling ahead of the major source of revenue; the property tax is inelastic; the sales tax is regressive; intergovernmental transfers are growing but not rapidly enough; and debt ceilings are unrealistic and must be circumvented in devious ways.

The last section of the book covers six very critical urban problems: planning, renewal and housing, public safety, health and welfare, education, and public works, especially transportation. The well documented pathologies that have contributed to urban difficulties are discussed in detail, but unfortunately the political aspects of the problems are given only in the most cursory analysis. Two main threads emerge, though they are not articulated at the onset.

First, urban politics are functional and do not fit any ideal forms or simple models. Second, politics at the local level are characterized by a high level of conflict between decision making and administration. Urban Politics in America tries to do too much, opting for scope rather than depth. While Dr. Baker is an excellent writer, ordering his presentation well and drawing on a wealth of materials, there is no solid structural framework. For example, there is no theory as to how size or density of population affects urban politics.

There is no explicit analysis of the political trends or where they will lead us. And the reader interested in such current critical issues as revenue sharing, neighborhood control, or racial developments in the central city will find only superficial treatment of these vital subjects. The book is a compilation of conclusions rather than an integrated body of knowledge, and it does not offer an interpretative framework for the wealth of information that it covers. 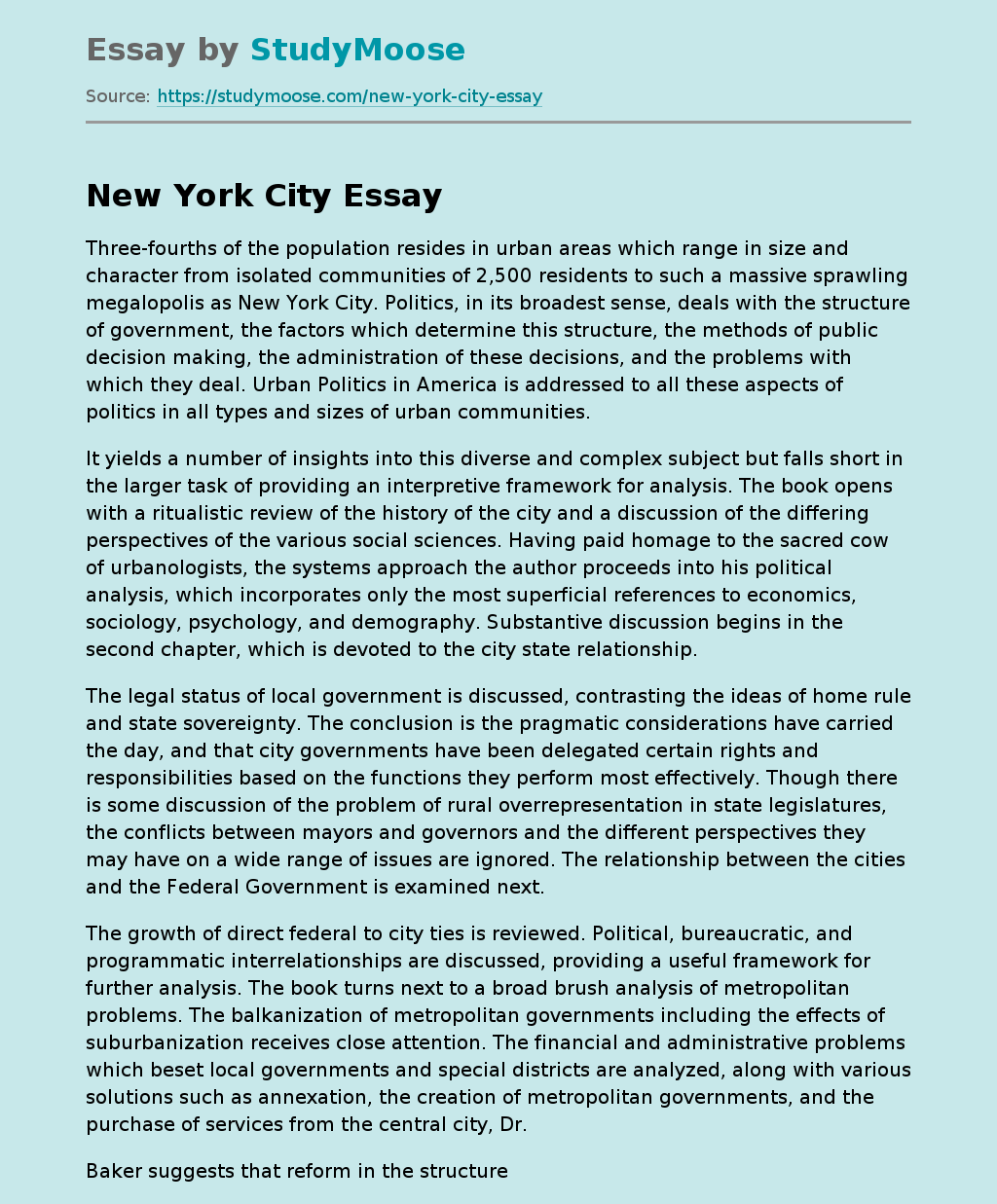