Negative Racial Stereotypes and Their Effect on Attitudes Toward African-Americans

Brent Staples essay, “Just Walk on by: A Black Man Ponders His Power to Alter Public Space” published in 1986 that intended for educated white women for the stereotyping of black man. Staples written this essay to give you the experiences of his journey as a black man facing racist experiences while living in Chicago and New York City coming from a small town of Chester Pa. His frustration made him aware that people would look at you differently as he becomes familiar with the language of fear with the intention to change the way he dresses, look and his speech to fit in.

Don't use plagiarized sources. Get your custom essay on
“ Negative Racial Stereotypes and Their Effect on Attitudes Toward African-Americans ”
Get custom paper
NEW! smart matching with writer

Staples main purpose of article the essay, “Just Walk on By,” to demonstrating the negative view of black men and the fact that racism is still alive today. He put on the path to understand the effect his appearance can have on his journey as a black man. Staples describes his extreme frustration at the fact that racism plays such a large role in his life.

His life was prelude of prejudice and racism that he shared with many examples for his audience to understand the ignorance of America’s thinking.

Staples describes how he was discriminate against as a black man in general but walking at night seems to be terrified by white women because of his stature, becoming the realization of the whole idea of why women fears him. Why were black men being target as a thug or criminal? Staples wanted to know why society is so narrow-minded.

Staples notices that people on the streets were afraid of him, and so he began observing different behaviors demonstrated by people he encountered while walking. For example, Staples notices that people avoid making eye contact with him or people cross the street to avoid encountering him. Staples would not often notice the “hunch posture” where women will hold their purses tight, bodies in defense mode (hunch over like a linebacker for a football team) with no expression on their face. No eye contacts making sure that they will not become their nest victim Staples encounter in which he or another black man while trying to do an article or report were mistakenly thought to be a criminal or thug just because of the way the look. He describes his first victim was a white woman, well dressed, probably in her early twenties in a mean part of Chicago as she grew scared of him and her walking grew faster so she can get away. Staples mention the two essayist Norman Podhoretz literature “My Negro Problem-And Ours” black men that he encounters made him nervous on certain streets and Edward Hoagland extols a New York where once “Negro bitterness bore down mainly on other Negros” stated black men will hate on their own race.

I do agree Staples encounters were referring to as growing up I have heard stories that my family had to endure the pleasure of being a stereotype, especially my brother who is 6’4 just like Brent Staples. enter to businesses where he was followed around if he was going to take something or rob them. Staples encounter was with a Doberman pincher when he enter the jewelry store and that store owner thought he was a burglar. That is known fact u have witness just by association Staples first encounter was with a white women that ran way away from him in which I understand completely being a woman myself mother a lot of racism in the 70’s not getting a job Norman Podhoretz literature “My Negro Problem-And Ours” black men that he encounters made him nervous on certain streets and Edward Hoagland extols a New York where once “Negro bitterness bore down mainly on other Negros” stated black men will hate on their own race.

Negative Racial Stereotypes and Their Effect on Attitudes Toward African-Americans. (2020, Nov 29). Retrieved from https://studymoose.com/negative-racial-stereotypes-and-their-effect-on-attitudes-toward-african-americans-essay 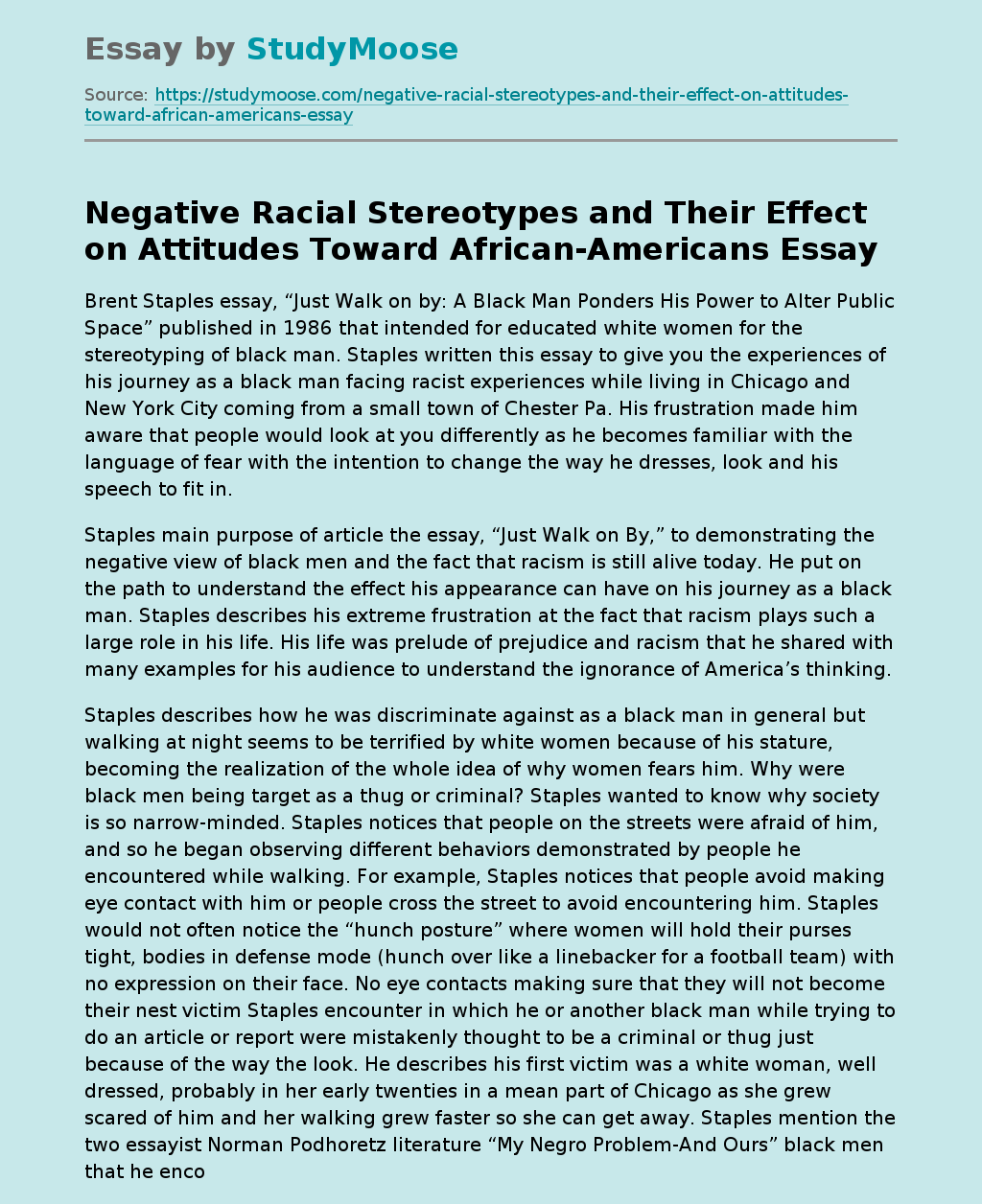