Advertising is a tool widely used by businesses and the media to promote their products. Unfortunately, advertising is pushing America more and more into a quick downward spiral. Advertisement acts like a fish hook for consumers. They have baits about the interest and wants of their consumers. Then when consumers grab a hold of it, advertisers reel them in on buying the products. The majority of advertisements are alarmingly misleading. They also convey an unrealistic view of certain products. Companies pay millions of dollars a year on advertising and go beyond the limit to persuade their customers.

Don't use plagiarized sources.
Get Your Custom Essay on Negative Impact of Advertisement Just from $13,9/Page

Little do consumers know they are indulging in this unnecessary luxury with nothing to gain. Advertising is unethical due to its negative impact on children, false images, and unrealistic expectations; however, advertisements do perform an important role on providing services to society.

Without a doubt children are affected the most by advertising. At a young age, a child allows their mind to be molded and constructed.

They don’t have much understanding of all the negative effects of the media and its advertisements. Children grow up to be everything they are surrounded by, as they are very susceptible to all outside influences. In many cases, children are most likely tended to misinterpret the messages conveyed through the advertisement. They end up having misinformed beliefs about many issues, which creates a desire to own a particular product being advertised. Joseph McLaughlin, a researcher from Fordham University, stated that “Children younger than 6 are especially susceptible to television advertising because many of them can’t tell the difference between a commercial and a program.” Because they are not able to distinguish the difference, glossy images in magazines, billboards, or flashy advertisement on television only create the impulse for excessive desire to buy.

Eric Schlosseris a well-known journalist that wrote the article “Kids Kustomers”. Along with McLaughlin, Schlosser shares a similar statement about advertising toward children. He says, “The aim of most children’s advertising is straight forward: get kids to nag their parents and nag them well” (521). This means that advertisers are trying to focus their attention to make kids want their products and nag their parents until they get it for them. Children are the future, and an important part of the present as well. With these kinds of effects of advertising on them, this only creates a very wrong impression on their young minds about living without the needs of materialistic joys.

Above all else, advertising is unethical. It creates an unrealistic image that urges people to buy in on the product. It gives them a natural high from the initial “new” or “delicious” feeling and leaving them unsatisfied after the feeling has worn off. Fast food advertisements are well known for exaggerating their products. Katie Robbins from Delish, wrote an article called “Fast Food: Truth behind Advertising”. In the article she says, “It looked so juicy and hearty, piled high with crunchy pickles and onions and resting on a soft, pillowy bed of a bun. But the actual sandwich that greeted when we ordered it at the Golden Arches didn’t look quite like the images we’d been seeing on billboard. Tired and limp, it was the anemic younger brother of the plucky McRib of our dreams” (Robbins). This means that people invest in a product they believe they saw in the advertisement but in reality, it’s just a pathetic excuse for fast food joints to make money.

False beauty in advertising and pressure to look good caused many women to strive for the ideal perfection. Like Robbins, Jo Swinson, a writer from CNNopinion also wrote an article about how advertising contains false images. She stated: For some, the desire to look as perfect as these models can become all-consuming, and a wealth of evidence suggests that people in the UK are experiencing serious body image problems — a trend undoubtedly replicated around the globe. People unhappy about their bodies can develop eating disorders, turn to diet pills or steroids, or try cosmetic surgery and Botox injections. This means that women everywhere are willing to starve themselves or go beyond the limit to get the perfect body, to make them look like their favorite celebrities even.

Advertising create unrealistic expectations. Ads for prescription drugs aimed directly toward consumer have resulted in unrealistic expectations about the effectiveness of the drugs and its side-effects. In these kinds of advertisements, the visual images only show healthy, happy people. It never truly shows the actual downside effects of the drugs. Beauty and health products share a similar component by not living up to their promises; therefore, resulting in wasting consumer’s money once again. Herman CP, a psychologist from PubMed stated, “The false-hope syndrome suggests that unrealistic expectations in advertising about dieting set dieters up for failure.” This shows that fitness and health ads set consumers up to failure when they don’t see a change in their body, thus lead them to lose hope and give up. Gina-Marie Cheeseman from TriplePundit, shares a similar argument with Herman about unrealistic expectations. She says, “One of the implications is that is creates an unrealistic expectation about the product that the company is advertising. Airbrushing sure does create unrealistic expectations, and U.S. women are shelling out money to meet those expectations.” This means that women everywhere are spending money on products to enhance their beauty to look like the one they see in the advertisements. Little did they know, advertisers used Photoshop and airbrushing to enhance the look of their models.

Advertising however, still plays an important role on providing services to society. It offers social benefits. Along with that, advertising can be used to promote free speech since it is free speech: “This is especially true in countries where free speech has been suppressed. Advertising there, especially when it comes from the Western world where free speech is embraced, can encourage the idea that free speech is important,” says by Miranda Morley, a writer from SmallBusiness. This shows that advertising can be influential to foreign country that doesn’t allow freedom of speech. Like Morley, John E. Calfee also talks about how advertising is useful. He says, “But advertising does much more. It routinely provides immense amounts of information that benefits primarily parties other than the advertiser. This may sound odd, but it is a logical result of market forces and the nature of information itself” (98). Through providing information, it gives it a reason for research, and that research is backed-up by a firm sponsor thus creates credibility through its products.

Although advertising plays an important role in society, unfortunately it is one of the major reasons why America is spinning into a downward spiral, doing major harm with little positive intention. Murray Lunn, a writer from Helium says, “ Deceitful advertising, over the years, have caused consumers to associated the majority of advertising as a “sleazy” attempt to make them buy a product or service; participating in these types of advertising methods can cause a “black eye” on a business to the marketplace.” This means that businesses may put themselves in danger in the marketplace if they participate in these deceitful advertising. An article written by Shelly Frost, a writer from SmallBusiness, talks about how advertising affects businesses. She stated, “The Company is sometimes charged a fine for both current false advertising and any future incidents of deceptive advertising. If the company is sued, additional expenses come in the form of legal fees and money that must be paid to consumers who filed the suit.” Companies could lose more many than what they spend on making the advertisements if they’re caught false advertising.

Advertising has long been seen as a way to convince consumers to spend their dollars on products or services they may not truly need. It is unethical. Women, who would see beauty ads, would want to emulate the thinness and beauty of such models. Today’s society has become cultures of consumerisms, and it is teaching children the false sense of self-worth. Also those consumers that were given the false impression about a product through various forms of media tend to suffer the most from society’s portrayal of the perfect body. Advertising is unethical and if not monitor carefully, it can affect and individual more negatively than for the better.

Negative Impact of Advertisement. (2016, May 10). Retrieved from https://studymoose.com/negative-impact-of-advertisement-essay 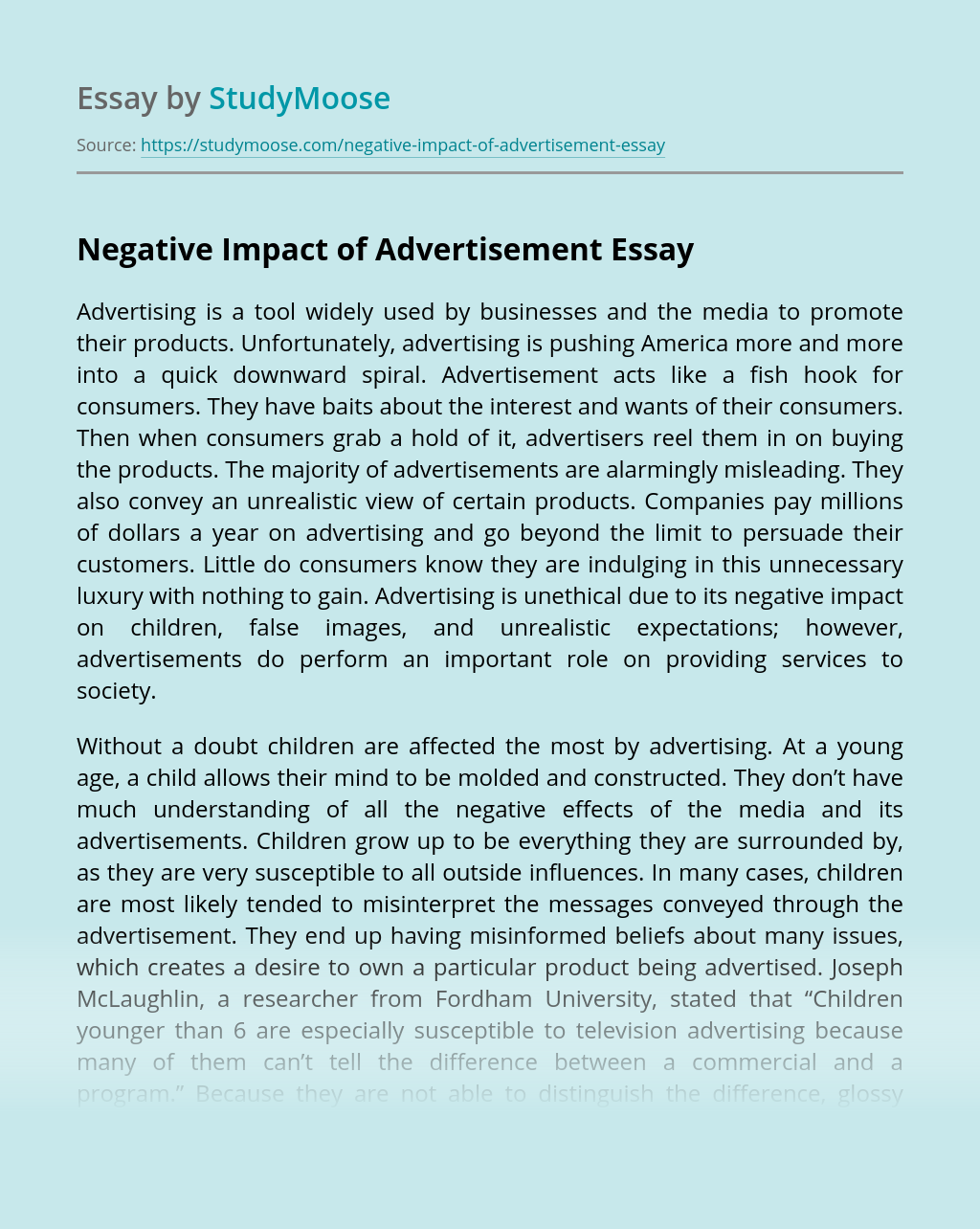 Marketing is a very complex concept that involves a detailed process. The types of strategies for marketing focus on a target audience and are directly related to what is known as the 4 P’s of the Marketing Mix. Don't use plagiarized sources. Get Your Custom Essay on Negative Impact of Advertisement Just from $13,9/Page Get...

Get Essay
Advantages of mass media

Mass media refers collectively to all the media technologies that are intended to reach a large audience via mass communication. There are various forms of mass media such as radio, television, movies, magazines, newspapers and the World Wide Web. Mass Media enjoys a very prominent role in our lives and thus, it is believed to...

Stereotypes According to Eugene August in Annotated Bibliography

Bruce Dawes poems explore the impacts of consumer culture and are an indictment of the growing materialism in modern society. In Enter Without So Much As Knocking (1962), Dawe portrays a world dominated by consumerism, which has lead to `conformity, and eroded the individuality of many people. The idea that our view of the world...