The nature and nurture in individual development

There are plenty of factors that motivate our growth and development throughout our life such as: Nature is the theory that our personality, intelligence and our sexual adjustment is inherited by our families DNA. Nature is the environment around us that is argued to change the way we are brought up and behave.

Don't use plagiarized sources. Get your custom essay on
“ The nature and nurture in individual development ”
Get custom paper
NEW! smart matching with writer

Psychologists believe that the environmental factors around us change the way we are not nature around us. Nature can consist of many different things such as: our families DNA, our family’s behaviour while around us, inherited illness -such as asthma, cystic fibrosis and diabetes and our sexual orientation. Those who adopt an extreme belief are known as nativists. Their basic assumption is that the characteristics of the individual as a whole are a product of nature and those individual differences are due to each person’s unique genetic code such as their DNA from our families.

Even though asthma and diabetes can be inherited through our families DNA, nurture can have an effect on these since if people are smoking in the environment around you, and you’re breathing that smoke into your body, over time this could lead to lung damage which could ultimately end up in an individual developing asthma, living in a polluted area can also affect your lungs. So there are many types of environmental factors that can affect an illness that can be inherited Also nurture can affect somebody developing diabetes as well since the food we are exposed to such as: takeaways and snacks and high calorie fizzy drinks can cause a person to become overweight/obese which will lead to low blood sugars, this can make a person develop diabetes.

Nurture is the theory that our personality and our intelligence are learnt by individualism and by our personal experiences. Nurture is linked to your childhood or how you were been taught to be brought up. Nurture is the effect the people in your life had on you growing up. For example this would be the values your parents taught you, like how to behave or speak to people. Nature is the genetics you gained while developing in the womb, like your eye colour, hair colour, hair texture, height and body frame.

Within the nature vs. nurture debate, scientists have carried out studies on twins to see if nature affected how they grew up or changed how they did things. On the second twin they used nurture to see if that changed how an individual did things. Identical twins will often not share the exact same values or beliefs as one and other. If genetically identical twins, were raised in different environments such as: one twin in nature and the other twin in the nurture side of the debate then their physical and behavioural traits would be very different. Psychiatrist Peter R. Breggin, who believes that the twin studies that have been done to prove that schizophrenia is genetic is wrong but he does believe that twin studies should be carried out to see how nature and nurture affect people’s upbringing.

Various studies show that genetic factors can affect a human’s health. Scientists suggest that by our genetic make-up can change the way we respond to environmental factors. Francis Galton compared identical twins to non-identical twins to see how nature affected the way they behaved and how they were brought up with the environment around them. Francis Galton debated which side was stronger whether it was nature or nurture by carrying out twin studies, Francis supported the nature side of the debate. Francis carried out twin studies to show the importance of genetics and how DNA affected human’s actions and upbringing. The results from Francis twin studies are that a human behavior’s is down to genetics. Genes cause people not only to have certain physical appearance which is the reason why identical twins look so much alike, but also how they behave, how they develop as a child, and whether they are at risk for inherited diseases or mental health problems.

Meanwhile in the nurture side of the debate, John Watson supported the theory that love, care and individualism can change the way we respond to things in life. John Watson believed we are blank slates at birth and that simply nurture can change the way we are brought up. The most well-known case backed up by nurture was Genie- feral child. Genie was not loved or cared for in her first thirteen years of life. She was tied up to a potty chair and wasn’t allowed to make any noise. If she made any noise she got severely beaten by her father. When Genie was discovered she did not know how to speak and wasn’t able to understand any language. Researchers were very interested in Genie case they discovered her brain waves had abnormal pattern. Researchers were unable to fully understand whether she was born with a learning disability or if her life of abuse had caused her to have such terrible brain damage, but the abuse she suffered would have slowed down Genie developing physically, intellectually, emotionally and socially. Lastly, even if she had a learning disability, she would have still been affected.

Genie was deprived of everything that nurturing in her life. Love, care, comfort, safety and security were something Genie had never experienced before in her life. But thanks to the researchers Genie started to learn a small part of the English language and she began to build social relationships with doctors This can be compared to the Oxana case. Oxana was born “normal” but she was 3 years old she was living in a dog kennel behind her house where she was cared for by dogs and learned the behavior of dogs and started to act like one. Nurture affected how Oxana developed in the PIES as a young girl. When she was discovered, Oxana found it difficult to manage with normal human social communication since she had been deprived of intellectual and social skills that were suppose to set her up for life her only emotional support had come from the dogs she lived with. Oxana’s lack of exposure to language in a social context made it very difficult for her to improve her language skills. While in these surroundings Oxana learnt this behavior from her only source of company which was the dogs. This is why John Watson believes that nurture changed how Oxana grew up. Nurture is the side john Watson supported. Oxana and Genie link together since they were both deprived of everything nurturing in their young lives. Oxana’s parents were alcoholics and simply could not care for her so they left her outside on one night and Oxana found warmth in a dog kennel. John Watson believed that if Oxana and Genie had a loving and caring home life, none of this would have happened and that they would have grew up as ordinary children. Nurture made genie and Oxana who they were not genetic’s (nature) which Psychologists believe in, this is where Psychologists and John Watson have debated over.

The nature and nurture in individual development. (2016, Feb 21). Retrieved from https://studymoose.com/nature-vs-nurture-9-essay 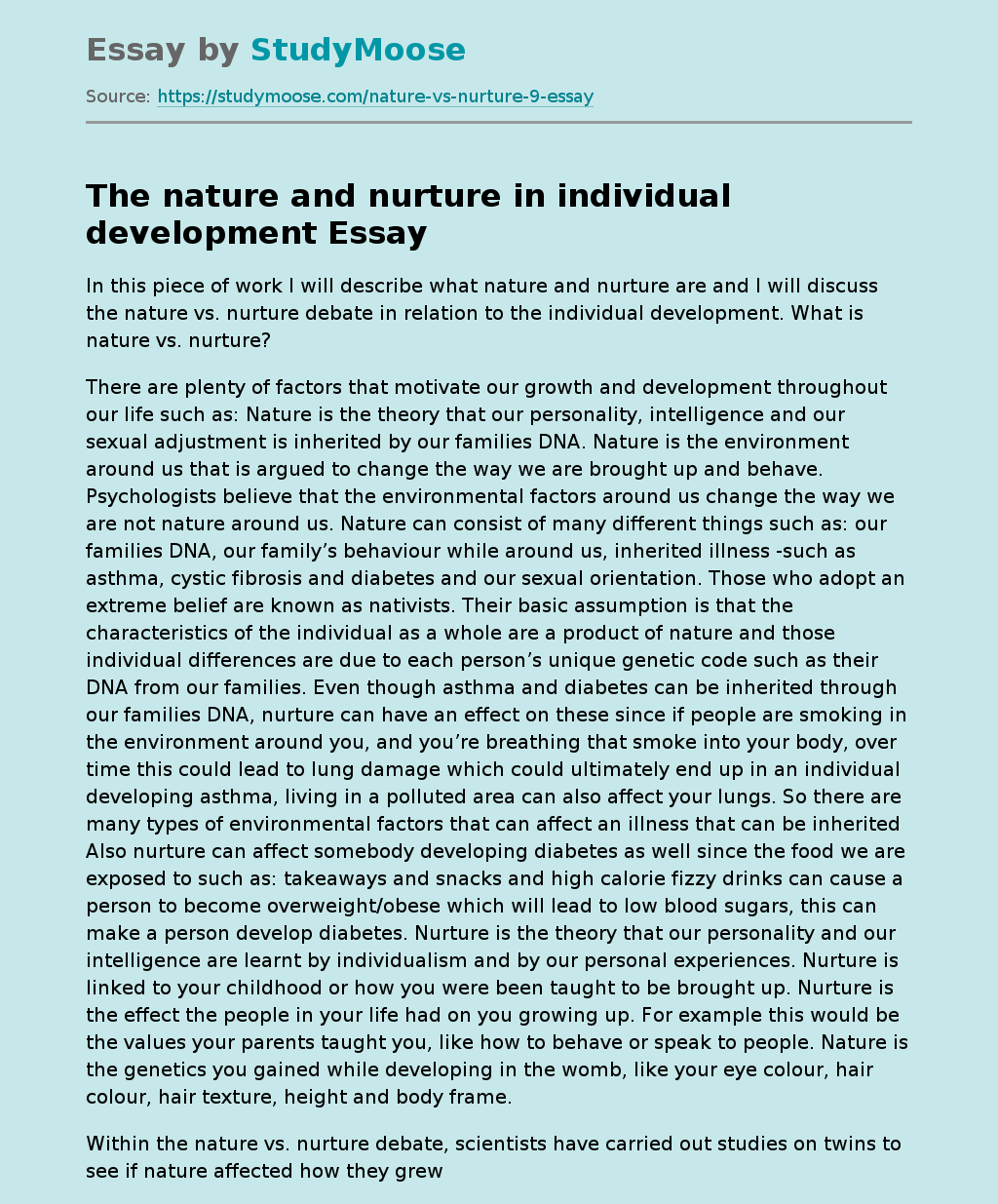