1.In this video, we immediately learn of an obsessed captain who wants revenge. Why does he want revenge and against whom or what? The captain wants revenge because he lost his leg to Moby Dick. 2.Who is the narrator of Moby Dick and what is the first line of the novel? The first line of the novel is “Call me Ishmael” and the narrator is Ishmael. 3.There are two significant Biblical allusions mentioned in the film. To whom do these allusions reference? How are the names significant? The two significant Biblical allusions are Captain Ahab which is the King Ahab in the Bible and the whale, which is a symbol of God or the Devil.

Don't use plagiarized sources. Get your custom essay on
“ Narrator of Moby Dick ”
Get custom paper
NEW! smart matching with writer

5.Why did Melville choose to write about whaling? Why was the industry significant? At that time whale oil was very popular and it made the whale industry a hit, therefore; Melville wrote about whales. 6.What did Melville do when he was 21?

He set sail towards the South Pacific, but after four years he returned and wrote about his visit with everyone on the island 7.What established writer did Melville befriend while he was writing Moby Dick? While he wrote Moby Dick he befriended Nathaniel Hawthorne. 8.Comment on the four harpooners of the Pequod; politically, why were they significant? The four harpooners were of different races and represented different cultures.

9.What happens to the Pequod towards the end of the book? Ahab? Ishmael? They were out at sea, and noticed that deep in the ocean a whale was giving birth, but that all of it was terrorized because of other whalers that set in. Ahab is killed and Ishmael is the only survivor of Pequod. 10.What were the final years of Melville like?

Melville’s final years were filled with personal tragedies and failure.

1.Ahab, do you think if you killed Moby Dick, your life would be better? 2.Ahab, do you want revenge because of the loss of your leg or because he took something more than your leg, like your pride? 3.Ahab, what would you have done if the whale didn’t bite your leg? 4.Ahab, why don’t you every mention your wife or son? Is a whale more important than them? 5.Ahab, how do feel about yourself knowing that you let people die for your obsession with Moby Dick? 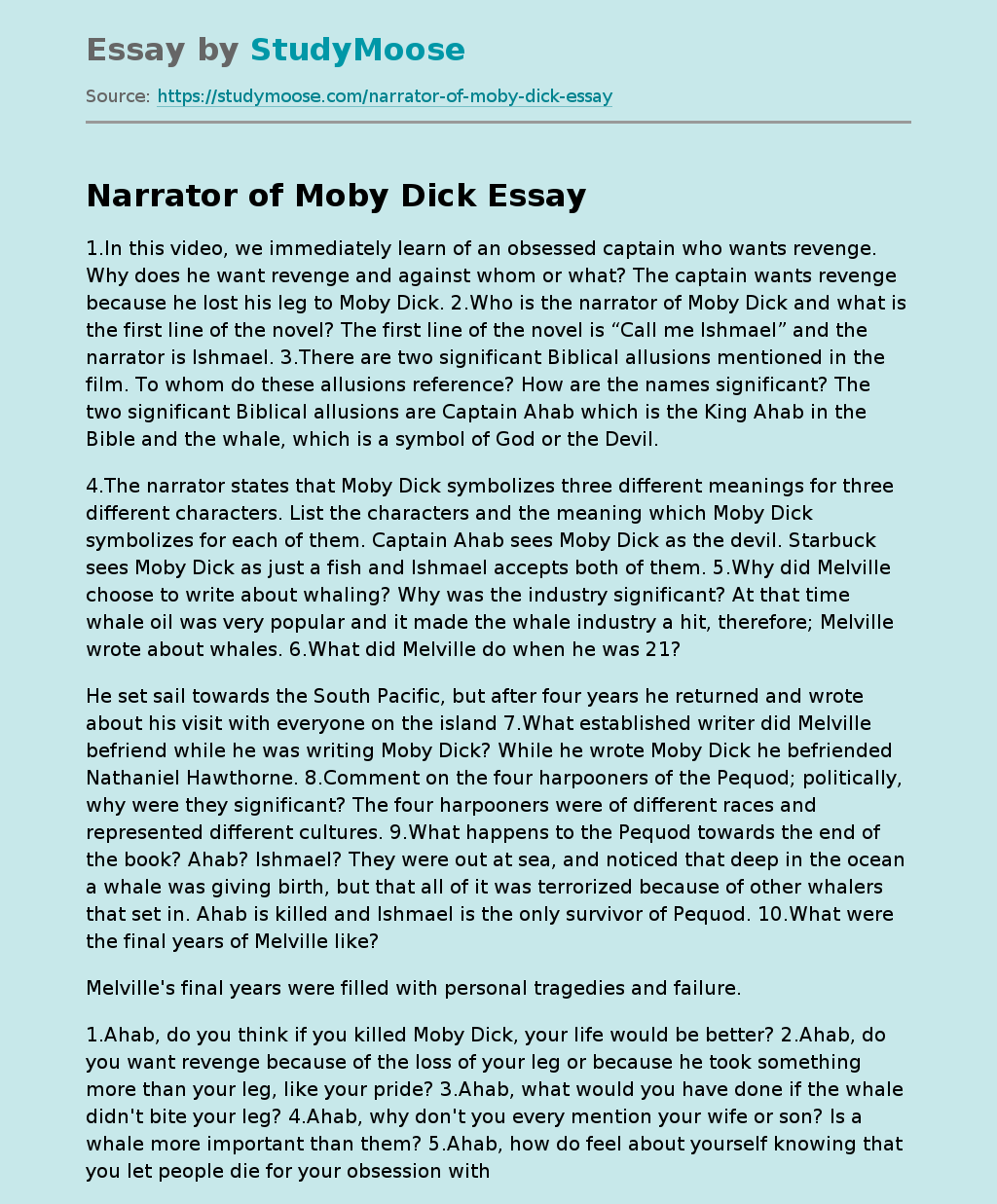