Narcissism as a Personality Trait

Narcissism is a character trait in which people tend to show more concern to self than other people around them. It can be either primary which is usually common in infants or secondary that is common in adults. This paper is going to look into the effects that the current generation narcissism has brought to the community and ways in which it can be controlled.

Narcissism is a character attribute that is usually functional to a given social group that denotes lack of concern for other people.

Don't use plagiarized sources. Get your custom essay on
“ Narcissism as a Personality Trait ”
Get custom paper
NEW! smart matching with writer

Although it has proved to be a biological necessity, care should be taken so that it doesn’t exceed the limits at which it may bring destruction to self and individuals around us. It is said to be a response to our inside states like fear and hunger and it proved to be important for homeostasis maintenance in the body. Modern day narcissism was accelerated by the chaos of 1960 that were politically motivated that made people to try to avoid the world around them by creating within themselves “small heavens”.

Narcissism can be divided into two different categories: primary and secondary narcissism.

Primary narcissism results to completion together with the urge to overcome tasks. The fear of separation of the infant from the mother interferes with the course of getting used to the outside world and therefore the infant results to creating a world of its own. Narcissism is encouraged during infancy by parents by making infants chase after wild dreams through the notion that is instilled to them that it is impossible to fail. They give out their love together with support which results in some sense of false perfection.

According to Brown and Nina (2008), patients who suffer from narcissism usually come from children whose mothers where more prominent in their care compared to their fathers who mostly you find were substituted by a male role model. When they become adults, they develop a desire for intimate relationships but unfortunately majority of them end up isolating themselves. Mostly victims are unable to differentiate between self and others because of the paradoxical desires that exist within them.

Victims of narcissism may be successful in different aspects but the moment they fail to attain their goals, they become depressed and feel guilt. Because of the exaggerated pride in accomplishments, reasoning becomes unclear. This may result to angry reaction to criticism from victims or result to depression because of the threat to believe of perfection. Although narcissism may affect them negatively, it may inspire the victims to come out as strong leaders through the confidence it gives them even in situations of criticism from others which brings about faith from other followers.

Although they seem chartable, their ultimate goal is self. They associate happiness to achievements together with products and not their contributions to humanity. Narcissism is common in children, but it can also be manifested in old adults especially those who care a lot about what the media says. The victims tend to live in their past and get depressed and become cynical (Campbell & Foster, 2007) Ways in which society promote Narcissism. Various institutions in the modern day promote narcissism.

An example is the 1960s politics that incited people to retreat to their own worlds which have turn out to be the source of narcissistic traits. Its energy is brought out through a voice that is applauded by people covering up its failures. Majority of its victim are men because many of them are known to get confused when it comes to desires where they may end up converting their desire for sex to greedy for political authority. This projection of individual feelings to society is manifested in political debates (Hesse, 2005).

There is also great contribution to narcissism by the media through expression of unrealistic hopes through propagandas in commercialization. The media has promoted equality of roles among women, men and children claiming that they all should be entitled to equal amounts and value of commodities just like the father. This has given rise to a new social individual. It has influenced parents to tolerate their children to avoid messing up. They have resulted to befriending their children by acquiring youthful looks and approaches.

This makes children to acquire delusions of self-sufficiency and grandiosity making them more vulnerable to superficial media. Media has not only affected kids but it has also had an effect on the general population in that it has taken away believe of self-sufficiency and influence to change the world. It has made people to picture themselves as insignificant parts of a machine and that they are unable to run themselves (Twinges & Campbell, 2009). According to Ronningstam (2005), narcissism has affected the society in all aspects.

Decisions have been made to be logical resulting in equilibrium between the losers and winners causing an overall narcissistic effect. Violence together with cynicism which has become part of our world has also contributed to narcissism development. Immorality that has become obvious in the society and suspicion about what the future holds for us has made people to retire back to selves and become heartless to the world around them. This is seen to be a way of defense in which through which we could avoid situations that could make us despair.

People are ready to overlook the outside world because of the horrors and violence that comes with it and impose on themselves a self-image and return to “selves”. It involves shifting from a realistic world to one that distorts reality to different thoughts and plans. Through turning away from reality, more isolation is brought about. Although people may seem social, neither desire nor emotional ability to socialize genuinely is left. Bonds that existed previously between friends begin to break leaving future generations’ fate at risk of getting away without care and recognition.

Narcissism can also occur in groups and mostly religious ones. Small cults can be equated to a family where by they try to provide a second opportunity to its members to develop emotionally. The relationship between their leader and its members can be equated to parent child affection where by a complete submission in exchange of protection and care is a necessity. In this case, only pure positive reinforcement is provided. Followers become connected to an individual similar to a parent but from whom come no disappointment.

The same is seen in other major religion (Ronningstam, 2005). Because of the effects it has been known to bring about, it is important that necessary steps are taken to ensure that it is avoided. This can be achieved through creation of transitional objects that could guarantee an individual oneness with independence from both the mother and nature at large. Family together with group rehabilitation can be encouraged as they give people a chance to interact with others at the same time exposing the internal self to the outside world (Lachkar, 2008).

Narcissism as a Personality Trait. (2016, Sep 13). Retrieved from https://studymoose.com/narcissism-as-a-personality-trait-essay 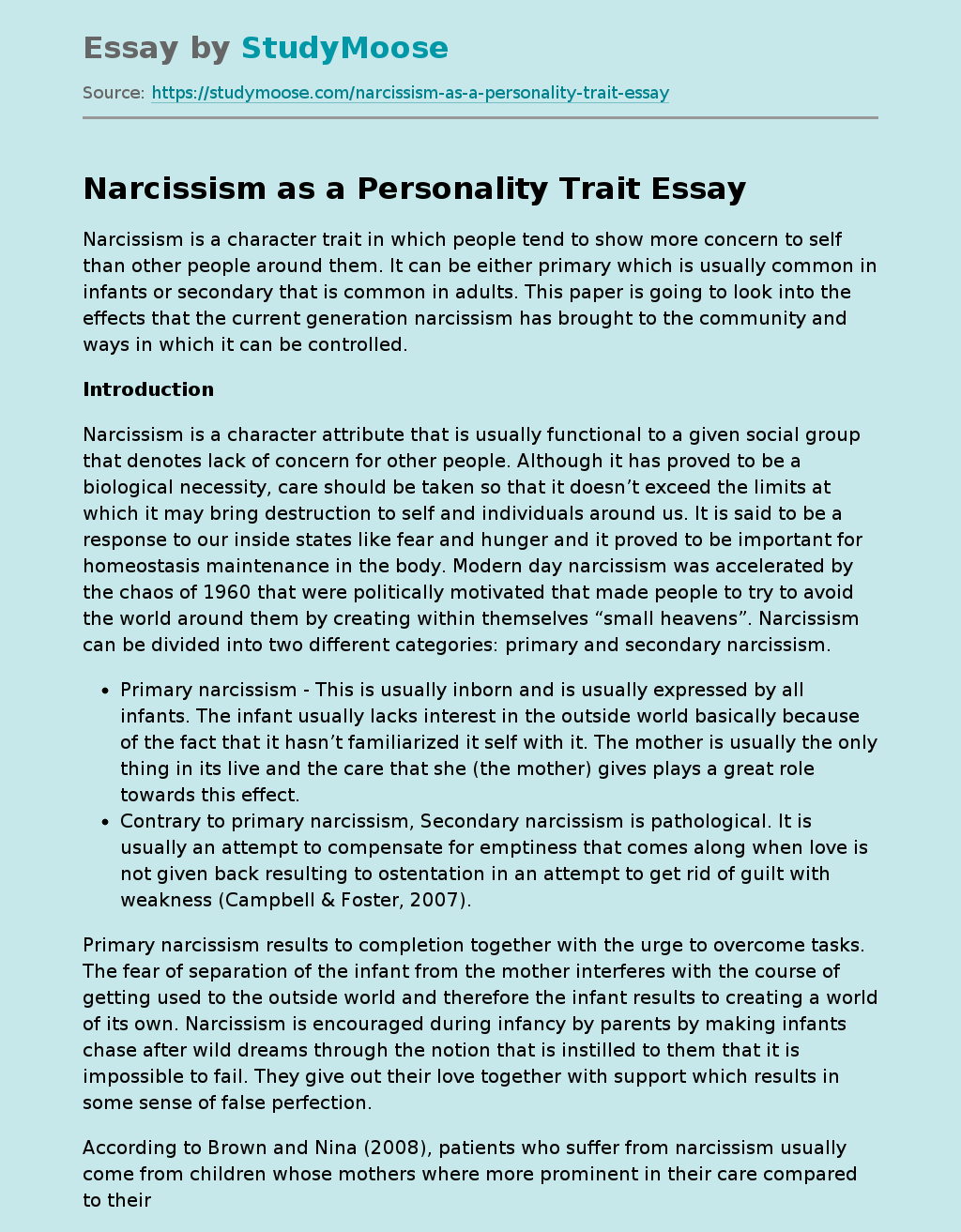