Benjamin Franklin once said “They that can give up essential liberty to obtain a little safety deserve neither liberty nor safety. ” I could not agree more with this quote. There have been so many countries that have fought for their freedom, including the U. S. and France, but the question is how quickly these countries would be able to sacrifice those hard fought liberties for their safety. When comparing France under Napoleons reign and the U. S. after September 11th you find that one thing they have in common was that the people were in a state of uncertainty and confusion.

Don't use plagiarized sources. Get your custom essay on
“ Napoleon and Modern Society ”
Get custom paper
NEW! smart matching with writer

Both countries had lost loved ones, both countries felt unsafe and scared. In that situation, the people turn to the government for help just as a small child turns to their parent when they feel scared. What a lot of people don’t realize is that you can trust your government to help you, but even the best of people can be corrupted by power.

Napoleon Bonaparte, the greatest military genius of his time, came to power in France in 1799. The people of France were sick of the bloodshed of war, and hated their government.

They were in limbo, stuck and unsure what to do next. That’s when Napoleon caught their eye. He was a young commander and chief of all the French forces, and he won every fight. He was someone who displayed strong leadership skills, and the people were drawn to him. One thing about Napoleon that holds true is that he knew that he was a “military genius”.

He pushed his luck multiple times especially when he convinced the Directory (France’s Government) that he could cut off British trade to Asia by occupying Egypt.

He ended up being defeated, but when he slipped away to France he made sure that that loss was wiped clean of his record. With the help of the people he overthrew the French Government; he established a consulate of three men to govern France. Of course he was the First Consul, who held all the power. But like many corrupt leaders of the past, Napoleon started getting influence by power. He did many helpful things like modernizing the government; he founded the bank of France, and reorganized higher education.

But what some people don’t notice when reading about these things is that in the new school system, the children were taught respect and discipline, they were being brainwashed to a certain extent to respect their government. Napoleon established something called the Napoleonic Code. It was established in 1804, and the code forbade privileges based on birth, allowed freedom of religion, and specified that government jobs go to the most “qualified”. The people of France followed Napoleons lead because he showed that promise of being a good leader in the beginning.

He gave the people hope that they would see better days, and they did to a certain extent. But one mistake they made was giving up their freedoms to do so. They wanted change so badly that they were willing to sacrifice their freedoms! Now I understand that the French people had been through the worst of worst, and Napoleon took advantage of that to a certain extent. French history shows that without law as the foundation, a society is compelled to use means of violence to bring human freedom. More bloodshed was the last thing France needed, but returning one of my first thoughts, they were in a state of uncertainty and confusion.

Now in America, we all know about how we fought for our freedoms in the revolutionary war. Freedom in America is why all kinds of people immigrated over. America was a “Safe” place. I think for all of us, September 11th came a huge shock. My generation is one of the last that are able to remember that day. Never had there been something like this before, never had America suffered through a National Crises. The once safe place was not safe anymore. The American people entered into the same uncertainty and confusion the French had been in.

We turned to our government for help; no matter what we had to sacrifice we wanted our safety to be returned. That was a big mistake. A poll was taken in 2011 for the anniversary of September 11, regarding our freedoms. 76% percent of people believed that our country is headed in the wrong direction. When asked how much confidence they have in the people in charge, only 14% had a great deal of confidence in our Executive Branch of Government and only 5% percent in our congress. Not surprisingly 65% have a great deal of confidence in our military.

I think the most surprising of all would be when asked the question “if someone from another country were to ask you to make a list of specific rights and freedoms you have as a resident of the United States, what would be the first think you would put on the list? ” 48% of people answered freedom of speech/expression/opinions, basically the 1st amendment. 6% of people didn’t even know. When I considered which is worse; a domineering government or the attitudes of the people who will allow themselves to be dominate, I have to say that I think the second one is the worst.

The people of the domineering government know what they are getting into, they know they don’t have a lot of freedom, but what is terrible is people having these freedoms and giving them up. If America stays on the path that is on, we are headed into a dark future. People need to open their eyes and see that counties like France who fought over and over again for freedom and then simply gave it up, ended up in a place we don’t want to be in. We have the freedoms so many people die for every day, and we are willing to sacrifice that for safety. Safety is important, but what is even worse is not being able to choose. 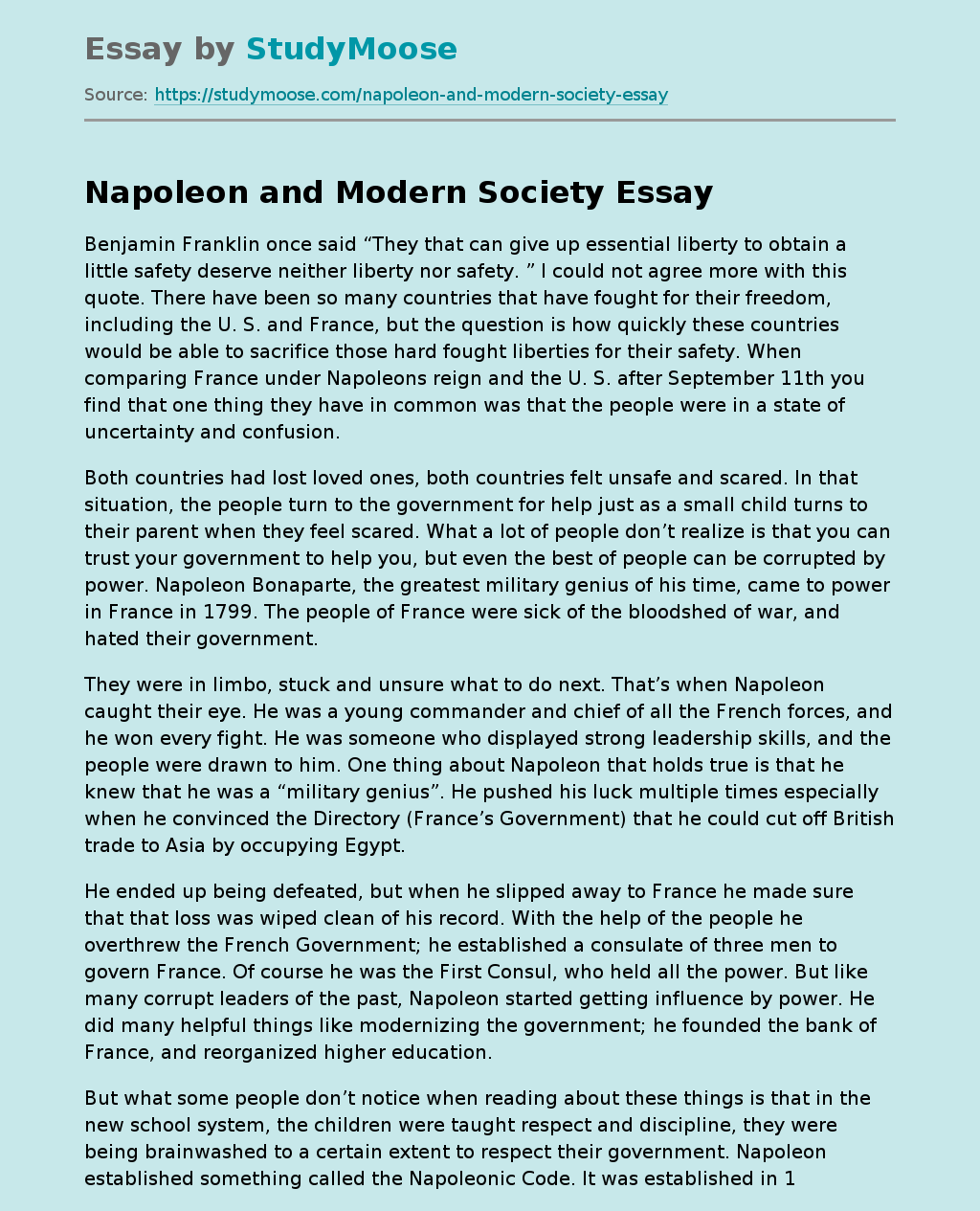