The novel My Sister’s Keeper by Jodi Picoult has an astounding contrast between appearance and reality. Throughout the world people keep secrets from each other. What motivates them to do this? Jodi Picoult develops this contrast by examining each character’s thoughts and motivation through a point-of-view narrative. Picoult demonstrates that there is a difference between the way people appear to feel and the way they truly feel. This statement is true to all the characters in My Sister’s Keeper, because they all hide their true motives from one another in the novel.

Don't use plagiarized sources. Get your custom essay on
“ My Sister’s Keeper ”
Get custom paper
NEW! smart matching with writer

What you see in reality may not always be the truth. What appears to be motivating a person to say or do something may totally be different from the real reason a person behaves.

This essay will discuss the superficial motives and the actual motives presented by Anna Fitzgerald, Alexander Campbell, and Jesse Fitzgerald. On the surface, Anna Fitzgerald masks the true motivation behind her filing the lawsuit by claiming that she was doing this for herself.

In essence so that she could get rights for her body. However, her true motives actually lay in the fact that she did not want to reveal Kate’s wish to die. Ultimately, when Anna was asked, “who convinced you?” (pg.378), she answered with regret, “Kate” (pg. 378). Although the reader knows that Kate wants to die, up until now, Anna appeared to have filed the lawsuit because she wanted to make her own decisions for her body and put her own interest in front of Kate’s.

Although these desires may have played a role in the lawsuit, Anna still allowed Kate to decide that she doesn’t want her to not donate her kidney. Anna has always been the one who could keep Kate alive, but she is also the one who can give Kate what she wants in this case. Anna hid this because she knew revealing Kate’s wish to die would hurt her parents, Sara for the most part. In similar fashion, Alexander Campbell masks his true motives when ending his relationship with Julia. Campbell wants to hide his epilepsy but at the same time does not want Julia to suffer knowing that she would have to live with him having it for the rest of his life. Rather than expressing his true feelings, and telling her the truth, he hides the fact that he has epilepsy, so that he does not feel vulnerable and invite pity on himself.

Throughout the novel Campbell comes up with many excuses as to why he takes his dog Judge everywhere with him. One of Campbell’s many excuses includes, “I’m nearsighted. He helps me read the road signs” (pg. 81). By the end of the novel, the reader eludes to the facts of why Campbell breaks off his relationship with Julia and why his dog Judge is always with him. The truth is illuminated in court when he has a seizure and afterwards when he explains to Julia, “. . . I got into a car accident. I came through with a few bruises, and that night I had the first seizure . . . the doctor’s couldn’t really tell me why, but they made it pretty clear I’d have to live with it forever” (pg. 387). Thus Picoult manages to show the appearance that Campbell broke off his relationship with Julia because he loved her independence and did not want to interfere with it. However, after the court incident it becomes clear that he breaks off the relationship for reasons mentioned above.

Finally, Jesse Fitzgerald is the type of person who doesn’t want to be figured out and conceals his reasons for intentionally burning things. Picoult builds on the sense that Jesse thinks he is invisible and not important to his family when Jesse’s dad just stares at him after he asks to go skateboarding, “…and his eyes were dazed and staring through me, like I was made out of smoke. That was the first time I thought that maybe I was” (pg. 245). Jesse’s fascination with flames is emphasized when he reveals that, “the thing about flame is that it’s insidious – it sneaks, it licks, it looks over its shoulder and laughs. . . Like a sunset eating everything in its path” (pg.246). The family feels that Jesse burns things for fun not realizing that he is doing it to hide his emotions and the fact that the family has given up on him.

To him this whole situation with Kate is like a blaze that will eventually extinguish as all fires do. He feels that all of the injustices that he’s suffered will always pale in comparison to that which is happening to his sister, which essentially leaves him feeling despair and helpless and ultimately driving him to arson to vent out his frustrations. In retrospect, Jodi Picoult has created multi-dimensional characters through the use of point-of-view narratives. She gives accounts of each person’s thought processes as they face the situation that Kate is going through. Through the characters of Anna, Campbell and Jesse, she manages to reveal the true motives behind each character’s behavior as opposed to the behaviour that is seen by each of the other characters. By the end of the novel, the reader realizes that everything is not what it seems on the surface. There are feelings, emotions, and decisions at play that influence the way the characters act and portray themselves. Ultimately, the characters provide good insight into why they act the way they do and in the end this justifies the behaviour that the other characters are forced to deal with. 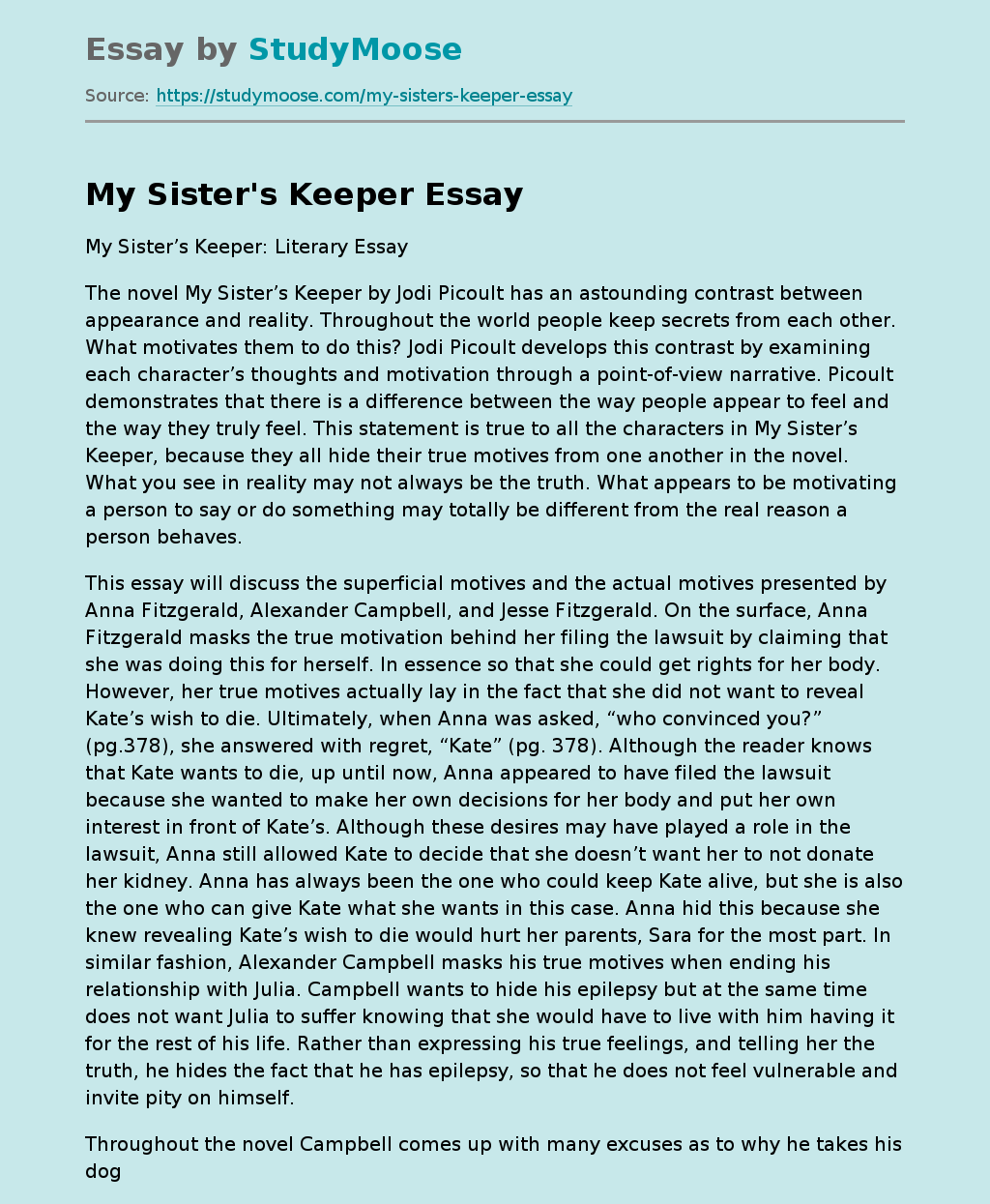