“My Last Duchess” and “Porphyria’s Lover” by Robert Browning

In this poem we explore the relationship between an old mother and her selfish children. The mother complains how she has to all the work all by herself, while the young ones live a carefree life. Even though her children are inconsiderate and selfish, she carries on working just to support her family. In the start of the poem, we see that she lays a lot of emphasis on how she has to do the work all alone by herself. She even mentions the different types of work she has to do herself and make them sound hard working.

Don't use plagiarized sources. Get your custom essay on
“ “My Last Duchess” and “Porphyria’s Lover” by Robert Browning ”
Get custom paper
NEW! smart matching with writer

We get to know this when she says: “And then I must scrub and bake and sweep”

Over her, the repetition of “and” make her work sound lengthy and hard working. She also uses “I” to show that she works alone without getting any help. She also introduces to the type of work she has to do like “scrub,” “bake” and “sweep” to makes us feel sympathy for her as these kind of jobs needed a lot of manual strength during that time.

Proficient in: My Last Duchess

As we are get in the middle of this short poem, we are introduced to the behaviour of the children toward their mother. We get to know that the children sleep late and wake up late due to which she has to the work all by herself. She says: “And the young lie long and dream in their bed”

The phrase “lie long and dream” tells us that her children are inconsiderate, as they sleep all day even when know that their mother is working hard all alone.

After reading this poem, some readers might think that she might be saying this in a loving manner as she doesn’t want her children to worry so she lets them sleep. While others might argue that she is just being sarcastic to her children. The old mother ends the poem in a way that suggests that she isn’t hoping help from her children in the future. She says that she is responsible for the entire family and has to keep working. We see this when she said:

“While I must work because I am old And the seed of fire gets feeble and cold. ” Over here, we sense a lot of hopelessness coming from the mother who doesn’t expect anything from her children. The phrase “must work” shows the love that she has for her children, as she carries on working just to support them, even though she is getting no help. She later on states “I am old” meaning that she realises her status in the family as she might be the only one earning for her family. She realises that her children have been ignoring her efforts but still carries on for their welfare. She also says “the seed of fire get feeble and cold.

” Over here she is referring to herself as the “seed of fire” and says that she will carry on supporting her family till that seed of fire gets cold, meaning she will work till the day she can’t stop. After looking at this line from the poem, some readers might think that the old mother loves her children a lot and will carry one working hard for them. However, others might think that she is working for herself as she also needs something to live on. Next we will look at love being disturbed, in which I will compare “My Last Duchess” and “Porphyria’s Lover” who are both dramatic monologues by Robert Browning.

However in My Last Duchess, the speaker his wife as a possession and kill her for being frank with other men. While in Porphyria’s lover, the speaker kills her so she could stay with her forever. My Last duchess is a dramatic monologue written by Robert Browning. This poem also reflects his interests in the European culture as the poem is based on an Italian duke from the sixteenth century. The characters mentioned in this poem are based on real life, historical figures. The narrator is Duke Alfonso II who ruled a place in northern Italy called Ferrara between 1559 and 1597.

The Duchess of whom he speaks was his first wife, Lucrezia de’ Medici who died in 1561 aged 17, only two years after he married her. In real life, Lucrezia died in suspicious circumstances and might have been poisoned. The poem is set in 1564, three years after the death of the Duchess. An messenger has been sent to see the Duke from the Count of Tyrol. The Count is the father of the Duke’s next wife. The Duke shows the messenger a picture of his late wife and remarks on her character, suggesting that she was unfaithful to him – and hinting that he might have killed her because of it.

In this poem we see that the Duke was a very possessive man and wanted his wife to only pay attention to her. He could not see her smiling with other men. He got her painted on the wall smiling and draws a curtain on it so only he can see her smiling. This shows that the speaker’s mind was very disturbed. The poem is set in a Italy and it starts off with the duke showing a messenger around in his art gallery and is introducing his first wife to him. The duke takes a lot of pride when introducing her, he said: “That’s my last duchess painted on the wall Looking as if she were alive. I call

That piece a wonder now, Fra Pandolf’s hands Worked busily a day and there she stands.. ” In these verses the duke is introducing his first wife to the messenger. When he says “ my last duchess painted on the wall” tells us that he takes a lot of pride when he introduces her to the messenger. The he says “as if she were alive” suggests us that his wife is dead and we know this as the poet uses past tense showing that she has passed away. However, by the way he was saying this shows that he does not have any sentimental value towards it, as he should because she was his wife and she is gone and will never comeback.

The Duke tells us that Fra Pandolf, a famous painter of their time painted the picture, but by the way the Duke says this, it suggests that he was trying to drop his name. And his eagerness dropped when his name was mentioned because he thought that his wife might have been very friendly with him. As we progress, we see that the speaker criticizes his wife a lot as we know that she was very frank with other men and gave them the same smiles that she gave the duke and he thought that those smiles were only for him. He said: “She thanked men- good!

But thanked Somehow-I know not how- as if she ranked My gift of a nine hundred year old name with anybody’s gift” These few verses sum up the duke’s character and the way he treated his wife. The phrase “she thanked men- good,” suggests that she was grateful to all men, which he did not like and made him very jealous We get to know to know that he is possessive when he said “she ranked my nine hundred year old name with anybody’s gift,” this suggest that the duke thought that the duchess preferred other men’s gifts instead of his 900 year old family name.

He thought that she was in debt to him for the gift of the noble title she obtained through their marriage, which he thought was greater than any other gift in the world. Near the end of the poem, we see that the duke had the duchess killed as he did not approve of her being too friendly with other me. He wanted her to only smile for her, but she was also very sociable and gave men the same smiles as she gave the duke. He did not do it himself but had other people under him do it. We get to know when he said: “Oh sir, no doubt, whene’er I pass her; but who passed without

Much the same smile? This grew: I gave commands; Then all the smiles stopped together. There she stands As if alive. ” These verses tell us about the reason of why the duke got the duchess killed. Over here we get to know more about the possessive and jealous side of the duke. He says “who passed without much the same smiles” suggest that he did not like the duchess interacting with other men, this reveals the possessive side of him. He then says that “this grew,” meaning that his wife was opening to more mean and he did not like that.

He then “gave commands” meaning that he got his wife killed by the people under him. At first when he said that “the smiles stopped,” we think that the duchess has reasons to be serious and unhappy, but later he repeats “there she stands as if alive,” suggesting that the duchess is dead and was killed under his orders for being unfaithful. All these quotes show us the true power of the men over women during the Victorian era. Now comes Porphyria’s Lover, which also a dramatic monologue and is also written by the same poet, Robert Browning.

The poem Porphyria’s Lover first came in 1836 and is one of Browning’s most shocking dramatic monologue. The poem is about the speaker who lives in the cottage and every night his lover Porphyria comes and makes the cottage cosy. She is from a rich family and the speaker is from the low class, this makes their love forbidden. One night he realizes that Porphyria will eventually give in the society’s pressure and wanting to preserve that moment he strangles her with her hair and toys with her corpse.

“My Last Duchess” and “Porphyria’s Lover” by Robert Browning. (2020, Jun 02). Retrieved from http://studymoose.com/my-last-duchess-and-porphyrias-lover-by-robert-browning-essay 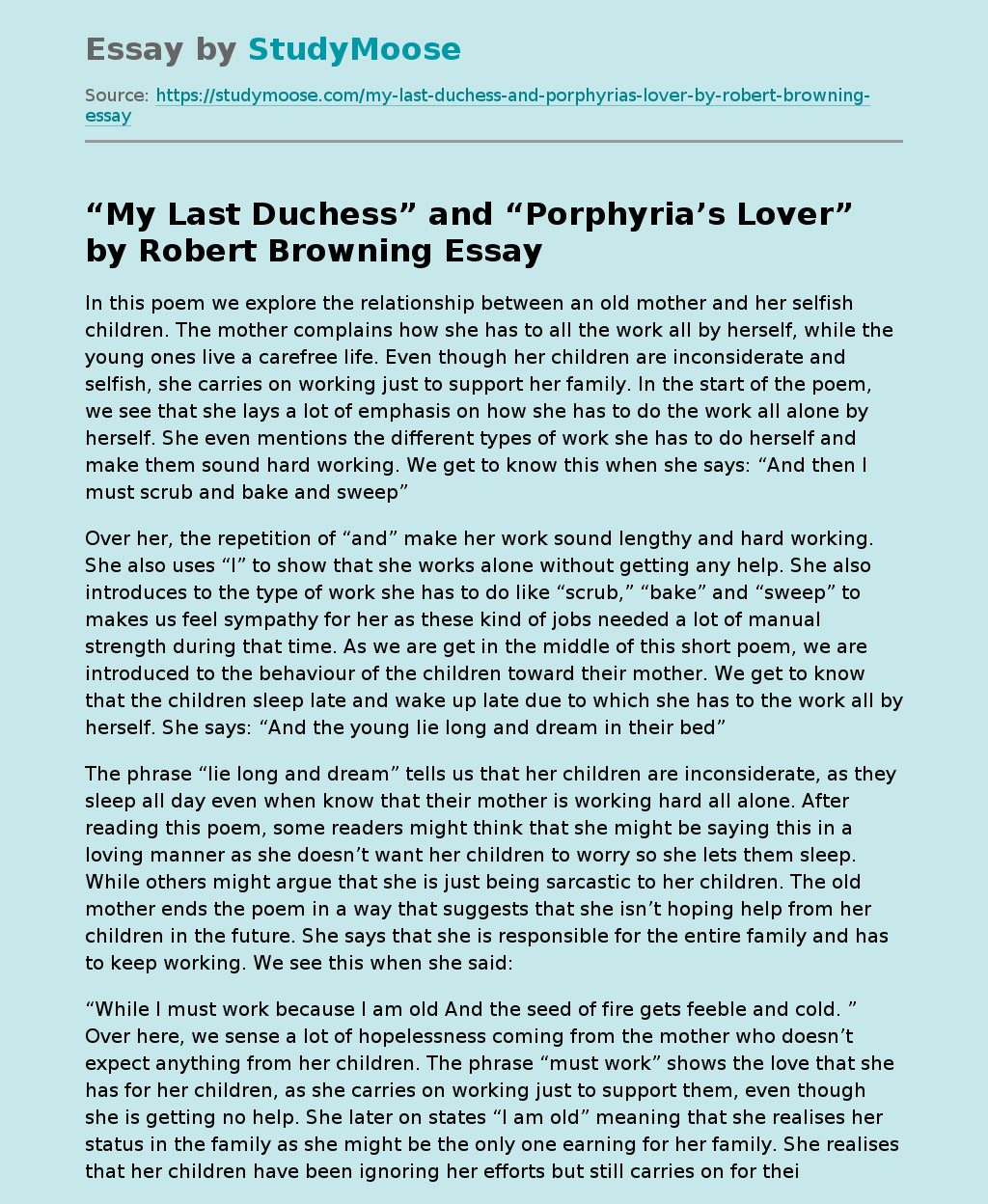