My Childhood Memory: An Accident That I Can Never Forget

When I was aged 3 in 2002 I had an accident at home that I would never forgot. I use to live in Helmsley, North Yorkshire and attended a nursery school called Montessori Nursery in a town/village called Wombleton. It was a Thursday I had been at nursery, I was very hyper and pumped up bristling with energy, my mum had come to collect me to take me home which I didn’t want to do although I had no choice, while my mum was making lunch I was watching my favourite programme on the TV which at the time was “Thomas the Tank Engine”.

Don't use plagiarized sources. Get your custom essay on
“ My Childhood Memory: An Accident That I Can Never Forget ”
Get custom paper
NEW! smart matching with writer

Once I had lunch mum started to clear up and afterwards started to disassemble me and Neil’s (my brother) bunk beds, I decided to be a bit more adventurous, I had seen a small old wooden step ladder (It was designed for the bunk beds), I decided to use it, I took the ladder down the stairs without my mum knowing, took it into the front room and proceeded to rest it against the TV unit and climb up it.

I thought that this would be fun and exciting at the time, I climbed the ladder holding onto to the top of the television as I got to the top where I grabbed hold of the handles at the back, I lost my balance and I kind of knew what would happen but I didn’t have enough time to react as I was very small back then, I fell backwards still holding onto the television, I landed on the floor with a thud and a cracking noise came from the tv , the television landed on my right leg and the screen was smashed to pieces, I felt a throbbing pain in it.

I screamed in pain and the whole neighbourhood could hear it, tears rushed down my face while I could hear my mum come rushing down the stairs, my mum came running into the room and was shaken to the core to find me on the floor crying with a tv on my leg, I was in agonising pain, she lifted the TV off me and then comforted me until I let her see my leg, I could not walk without being in a whole load of pain and falling over, so my mum had to carry me to the setae where should could examine my leg further before making a decision.

Mum contacted the local doctor to make an emergency appointment as the hospital was over 30 miles away in Northallerton, the place that I was born in, same hospital, the doctor said they could not x-ray because they didn’t have the right equipment for the job at hand and therefore he suggested that mum take me to the hospital. My mum looks a little bit cross when the doctor said that as she didn’t want to drive that far, but she did anyway.

We had to collect my brother from school as my Dad was away on business, (which was unfortunate at the time), and then drove to the hospital, we arrived at accident and emergency and were the only people there but had to wait for nearly two hours to be seen which is really stupid now that I think about it, there was no one there but we had to wait 2 hours, during those hours I fell asleep and that kind of helped ease the pain cause it made me forget about the fact a tv landed on my foot, I couldn’t walk on the leg as it would probably have made it worse and also because it would mean I would be in excruciating pain.

Eventually I was taken to have an x-ray(at long last) and had to wait for the results, when they came back my mum was told that it was not broken but badly bruised my mum was relieved to hear it , they tried to put an elastic sock on my leg but I would not wear it. I didn’t feel comfortable with one being put me. It just wouldn’t feel right because I was very stubborn at the time and I had never worn one so I didn’t want to wear one, I would now if the same thing happened again to me but that’s not that likely.

My poor mum had to carry me about for about a week or so until my leg recovered from the accident, the only down side of this was that the TV screen was smashed when it fell on my leg and had to be repaired so me and my brother Neil couldn’t watch our favourite shows for a few weeks which was a huge pain. No “Thomas the Tank Engine” for me.

My Childhood Memory: An Accident That I Can Never Forget. (2016, Apr 21). Retrieved from https://studymoose.com/my-childhood-memory-an-accident-that-i-can-never-forget-essay 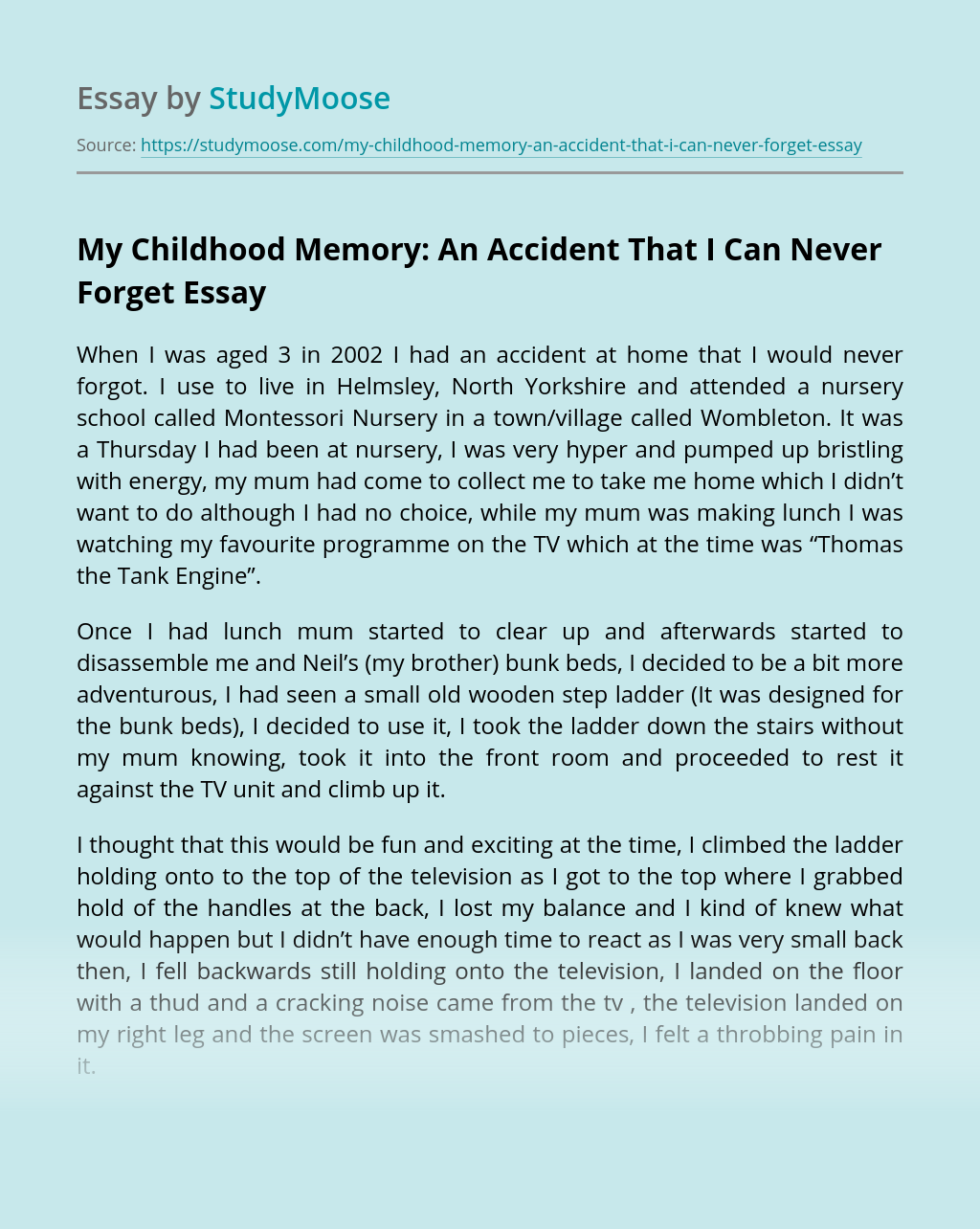