When I was younger, I fantasized about how wonderful life would be when I moved into my own apartment. Now I’m a bit older and wiser, and my dreams have turned into nightmares. My apartment has given me nothing but headaches. From the day, I signed the lease; I’ve had to deal with an uncooperative landlord, an incompetent janitor, and inconsiderate neighbors. First of all, my landlord has been uncooperative since the first day I came to that apartment.

Don't use plagiarized sources. Get your custom essay on
“ My apartment ”
Get custom paper
NEW! smart matching with writer

As promised, I arrived there at 3 p.m. sharp but he leisurely came there one hour late with depressed looking faces. Then he immediately started to give tour in the apartment and explained a little bit about the rent. After that, he impatiently asked for a deposit even though I’m still touring the apartment for any deficiency in the apartment.

At that time I noticed that the flush in the toilet is not functioning and asking him to repair it but him keep insisting me to pay for the deposit first.

Thus with an irritating voice, I said to him that he really needs to repair it and I can see his brows frowned. It’s been two months I stayed there, yet no plumber ever came to my apartment and another problem followed in which the air- conditioner started making noise and in the end it broke down. I called and emailed him but there’s no reply at all, so I went straight to his house. Surprisingly, he was there laughing with his friends and my anger cannot hold anymore, so I shouted furiously about the problem happened in the apartment. After a few days, a plumber came and the air – conditioner has been fixed. I’ve had a problem not only with my landlord but also with an incompetent janitor who is a middle-aged man. My first impression toward him is already bad, for he just came to my apartment without brought any equipment to clean the apartment. Not to mention that he used the whole bottle of the cleaning product just to clean the small apartment. I can accept if my apartment will be shining but the thing is that I can still see muck in my toilet, dust under my sofa and dirt in my kitchen.

There’s one time when he actually made my apartment like his own house. He would laid-back on my sofa and talk with his friends on the phone, watch television and eat my food in the refrigerator without my permission. The intolerable thing I can’t accept is that he thinks himself a plumber by fixing my kitchen’s sink and in the end my sink becomes worse. It has cost money for the sink to be functioning again. Perhaps the worst problem has been with the inconsiderate neighbors who live in the apartment above me is that they think they own the whole apartment. Even with problem occurred in the apartment and at work, I still felt that my apartment is my heaven but the peaceful moment do not last longer when they moved in the apartment above me after five months I stayed there.

Then at that time my dream turned into my worst nightmares in which music being played loudly at 3 a.m. and drums being played deafeningly and people talking boisterously. Sometimes I noticed that my balcony full of dust even when the janitor came to clean my apartment. I assumed that maybe the janitor didn’t sweep the balcony properly but it turn out that the neighbors above me actually was the one who constantly threw dust after they had sweep their house, for they think it’s just debris of dust. Sometimes, my apartment seems like a small, friendly oasis surrounded by hostile enemies. I never know what side trouble is going to come from next: the landlord, the janitor, or the neighbors. Home may be where the heart is, but my sanity is thinking about moving out.

My apartment. (2016, Oct 27). Retrieved from https://studymoose.com/my-apartment-essay 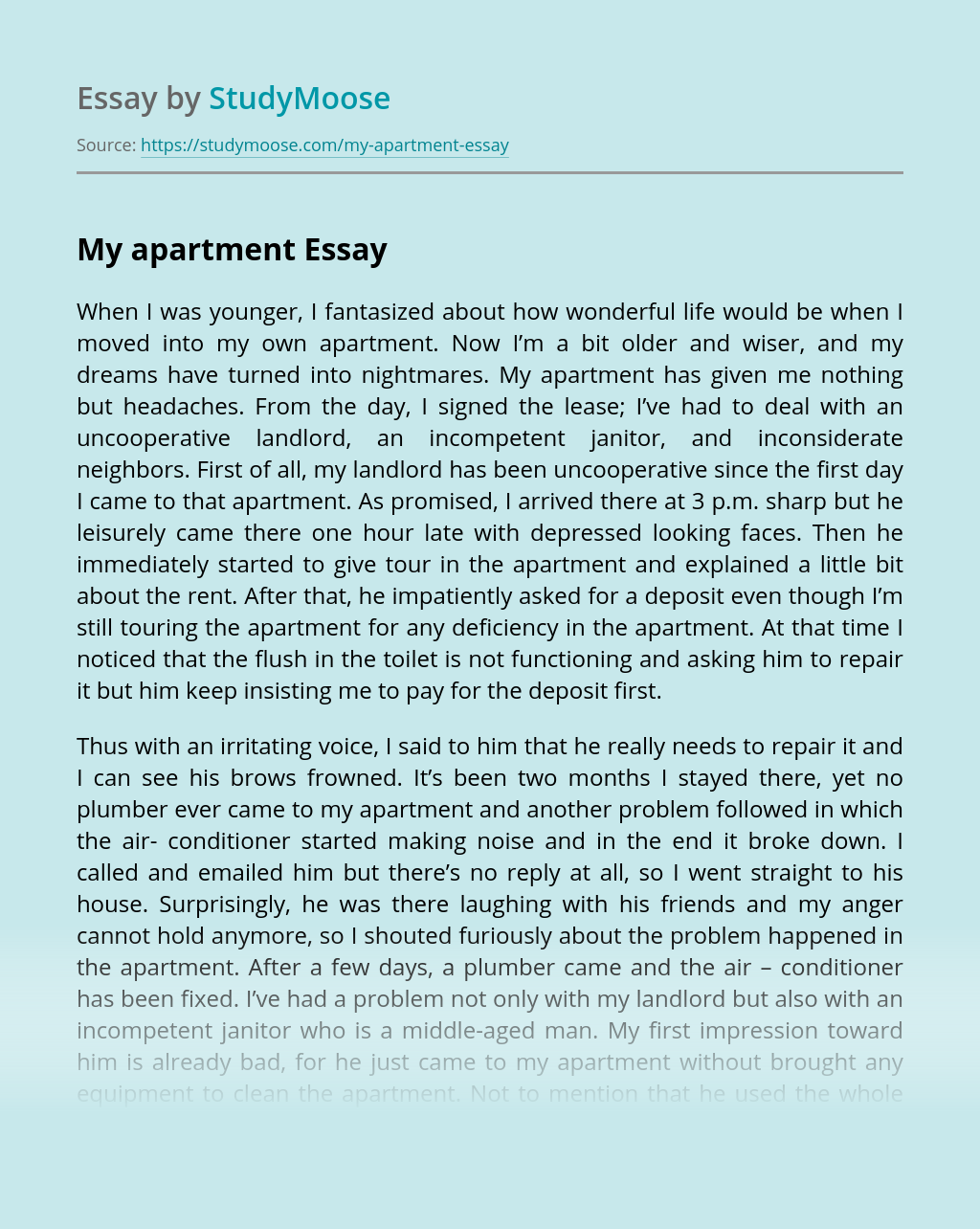