The film Mulan is set in ancient China, in an undefined dynasty. The Huns have penetrated the Great Wall and have invaded China. The emperor orders that new soldiers be drafted. Mulan, a girl who recently humiliated her family by failing the Matchmaker’s assessment, in order to save her aging father from death at war, steals her father’s armor and masquerades as a soldier. Throughout the film, several historical inaccuracies, as well as accurate portrayals, become apparent, in such respects as religious philosophies, historical inconsistencies and through the heavy American influence in the making of the film.

Don't use plagiarized sources. Get your custom essay on
“ The film Mulan ”
Get custom paper
NEW! smart matching with writer

According to the ideas of Confucianism, one of the key relationships is that of the ruler and his subjects. The ruler must always protect and serve them. With this in mind, the emperor prioritized the safety of his subjects over his own.

Confucianism is also very clear about the place of women in society. Women are to stay in the house and quietly raise children and always be obedient towards her husband and father. Mulan defied all of these rules as she took her father’s place in the army.

Later, she found that everyone trusted and listened to her while she was under the guise of a man, but as soon as her true identity was revealed, her captain refused to listen to her. This accurately portrays the Confucian idea that women are inferior to men and don’t belong in positions of power. Confucianism wasn’t the only philosophy present in Mulan, but Daoism as well.

Two instances where Daoism is visible is during the training scene, and where the emperor refuses to bow to Shan Yu. During the song sequence where Captain Shang trains his soldiers, he says such things as, “You must be swift as a coursing river… With the strength of a great typhoon… Mysterious as the dark side of the moon. ” When the Shan Yu demanded that the emperor bow to him, the emperor brusquely stated, “No matter how much the wind blows, the mountain cannot bow to it. ” Both of these examples illustrate a spiritual connection to nature, a key aspect of Daoism.

The writers of Mulan clearly did adequate research on Chinese philosophies in order to accurately use them in the film. Despite the accuracies in the usage of Chinese philosophies, there were various historical inconsistencies throughout the film. The construction of the Great Wall was started in the Qin Dynasty, and was not as tall as it was portrayed in the film until much later. The Huns were repelled from China for the final time during the Han Dynasty. Fireworks weren’t invented until the Tang Dynasty. The Forbidden City wasn’t built until the Ming Dynasty.

All of these events occur hundreds of years apart, yet the film contains a completed Great Wall, a Hun invasion, fireworks and the Forbidden City all in the same undefined time period. It could be the filmmakers didn’t do enough research to be aware of these inconsistencies, but it’s more likely that it was decided that these historical inaccuracies could be allowed to to slide for the sake of the film. American culture strongly influenced several aspects of the film. For example, at times, racial stereotypes seem even more exaggerated than they need to be. The emperor’s council has the humorous asian face and voice.

At the training camp and at Mulan’s house, people ate nothing but white rice. Mulan contains somewhat extreme asian stereotypes that were spawned from the American view of asian societies. The story is also influenced by American culture. One idea that is seen by many as distinctly American is the desire to do what is right, even if it against the norm. This idea is the subject of many a famous American story. That idea is present again in Mulan, as she rides off to war to save her father, despite his wishes and the law. The whole idea of ‘doing what you know is right’ is an idea that Americans hold on tight to.

Examining the Huns, the primary antagonists in the film, we see them portrayed how Americans would portray any of its national enemies. Throughout the film, the Huns make themselves out to be unstoppable brutes with an everlasting bloodlust, who press on to assault the Chinese capital despite losing their entire army, save a few. By the end of the film, we can’t help but see them as rabid animals who can only be stopped by being put down. Historically, America is very good at dehumanizing its enemies in this manner, most notably during World War 2, with the Japanese and Germans, nd even today to an extent, making terrorists in the middle east seem like targets for missiles and shells in our eyes.

American culture influenced the writing if the Huns’ characters heavily. Mulan is without a doubt an excellent film that has entertained more than a few generations. However, it is filled with historical inaccuracies as well as ideas that were noticeably influenced by American culture. Just the same, the accurate usage of Chinese philosophies in the movie make it all the better. With this in mind, we can not only understand Mulan, but also be able to analyze any film and with it, have a wider view of the world. 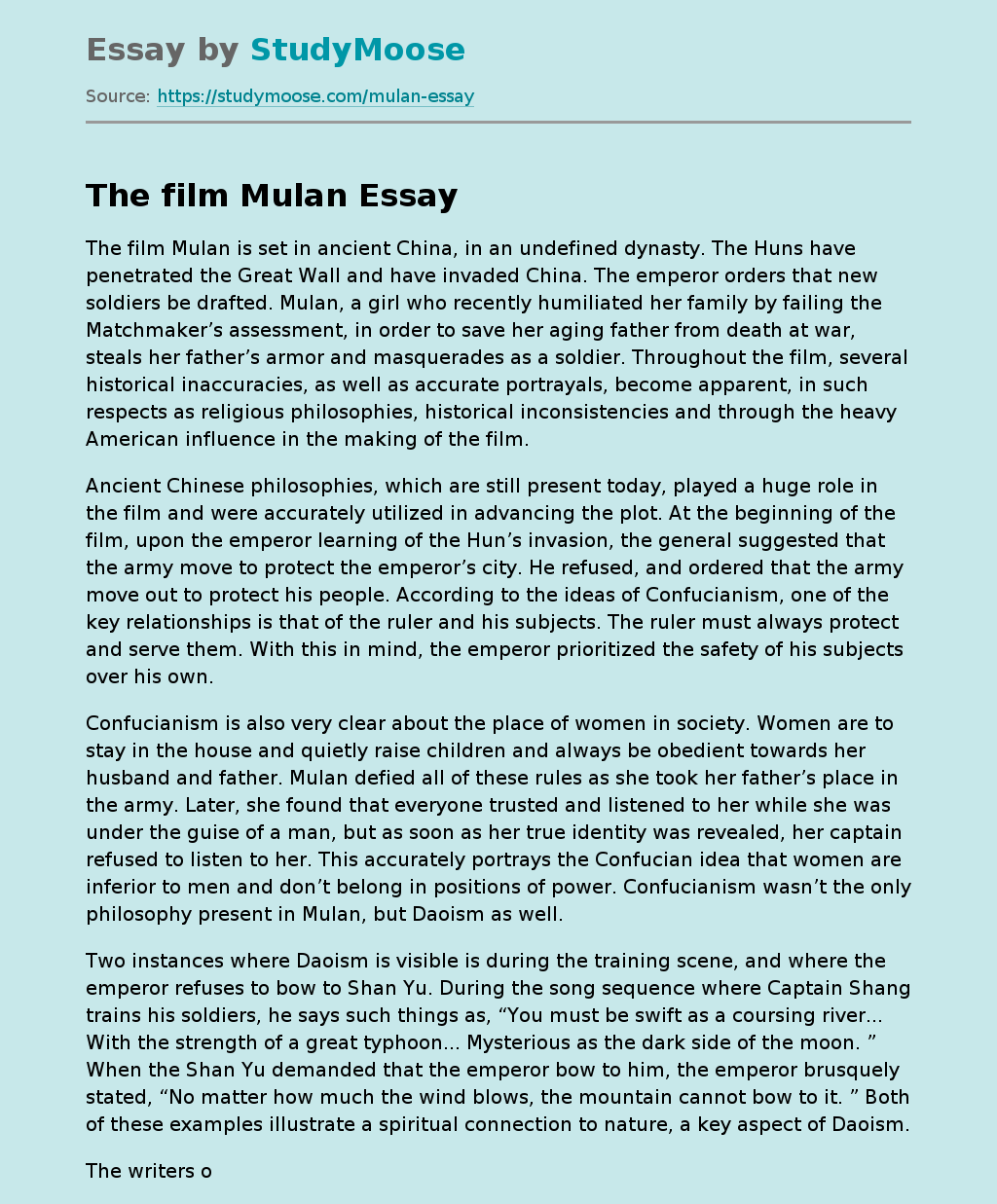