The Letters of Wolfgang Amadeus Mozart

Wolfgang Amadeus Mozart was a composer greatly known worldwide for his impeccable musical abilities in the movie Amadeus. His strong character is what made Peter Shaffer and Milos Forman, who were the movie’s screen writer and director to craft a portrait of the protagonist. This movie was indeed a great movie right from the compositions, performances as well as the drama involved. It is for this reason that this movie was able to scoop eight Oscars in 1985. The movie essentially covers about ten years of the life of Mozart, most of which he was in Vienna where he meets Salieri, who was a composer and is fascinated by Mozart and his music.

Don't use plagiarized sources. Get your custom essay on
“ The Letters of Wolfgang Amadeus Mozart ”
Get custom paper
NEW! smart matching with writer

This movie draws one interest particularly when it comes to the composition, the musical instruments used and finally the general musical elements such as melody, rhythm, dynamics and harmony. This paper gives an in-depth analysis to the composer, the accuracy of the portrayal and finally the issues learnt from Amadeus, the movie.

Mozart was portrayed as a very great composer as he worked on many genres. Among them are the string quintet, the symphony, the string quartet, sonata and finally the piano concerto. The composition therefore goes over a very wide range. Mozart, who dies before his thirty sixth birthday has over six hundred productions, some which were not even published. His great composition is seen through Salieri, who has been depicted as a mediocre composer, of third degree in composition but has a first degree in identifying good music.

Mozart therefore is one composer with hard to beat composition abilities.CITATION Wol66 p 23 l 1033 (Mozart 23)The portrayal of the characters and generally the music was in my own opinion accurate. Amadeus was a great composer and this is exactly what he was. He even dedicates one of his pieces of work to Salier, his great rival on his death bedCITATION Wol66 p 4 l 1033 (Mozart 4). Musical instruments used included were the piano, the glass harmonica, the flute among others. Since it was a movie based on classical music, the instruments were accurately selected. The musical elements also came out very strongly with attention paid to the awesome melodies, great harmonies, great use of rhythm and to a very large extent the style was very unique. CITATION Har81 p 34 l 1033 (Row 34)It can be easily pointed out that as much as the movie focuses on other issues such as spiritual matters, envy, rivalry and family, its main focus was music. Even rivalry and envy were as a result of the difference in musical abilities of Mozart and Salieri. Unlike other productions which make fictional characters real, this production made a real character a fictional one. This is in order to relate the musical capability of the real character, commonly known by his audience to the fictional character’s abilities.

Generally, I think Amadeus has been one of the best expressions of art, music, the genius artist. This is what makes the movie to be described as a modern classic. It offers a completely new dimension and point of view of classic music. This piece of art not only takes us through different and diverse characters but it also mixes music with the real world realities like envy. The director of this movie has made a number of movies but however many there are or are still to come, I doubt there will be one of them that will surpass this particular movie.

The Letters of Wolfgang Amadeus Mozart. (2016, Jan 02). Retrieved from https://studymoose.com/mozart-essay 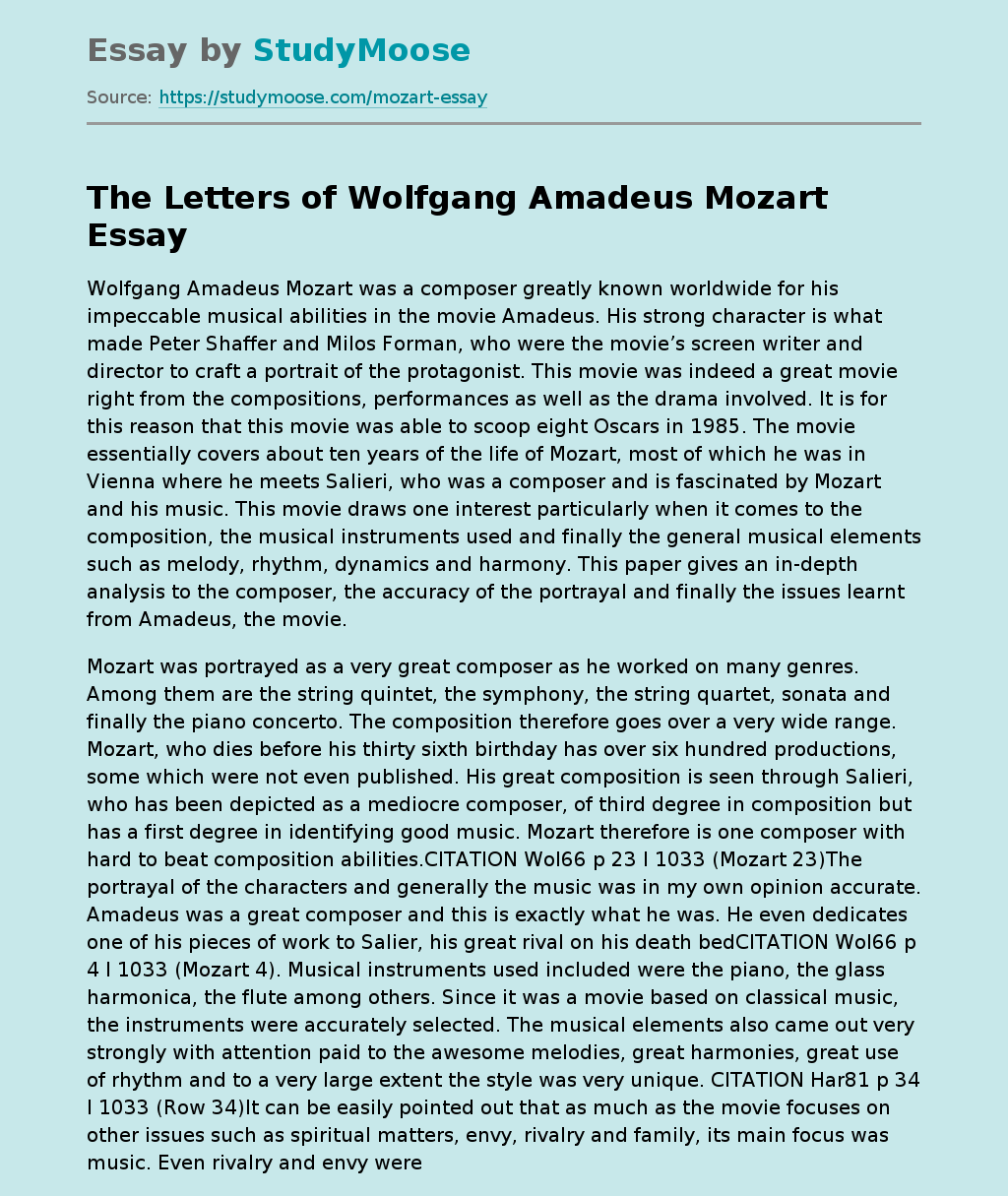