Movie Review of the Walkout

The movie entitled Walkout is based on a real-life story of a relatively unknown yet profoundly momentous event in the Mexican-American history. It tells the story of the 1968 protest movement staged by thousands of Chicano students from five high school institutions in East Los Angeles (Walkout). Paula Crisostomo, played by Alexa Vega is an honor student from Lincoln High School. For the first time in her life, Crisostomo challenged the authority of her elders by arranging a mass student walkout at five high school institutions in East Los Angeles in 1968.

Don't use plagiarized sources. Get your custom essay on
“ Movie Review of the Walkout ”
Get custom paper
NEW! smart matching with writer

With the help of the progressive and popular young mentor, Sal Castro played by Michael Pena, Crisostomo and the rest of the protesters struggled to make the voices heard (Walkout). In the process, the students learned significant life’s lessons such as the importance of fighting the things one believes to be right and true as well as the need to embrace one’s own identity. The protests happened at the time the United States suffered a turbulent year which shook its foundation to the core. The story is a clear reminder that people who come to unite for a just cause can make change possible.

The youth-led protests which took its inspiration from the civil rights movement appealed for the implementation of a curriculum which incorporated Latin American history. Similarly, it appealed for the abolition of janitorial work as a form of punishment. The movements were meant to be peaceful protests. However, a violent and overzealous racist police force attacked and detained the unarmed student activists (Walkout). The angered community was awakened and a struggle for justice began. It initially got the parents involved, followed by community leaders, and ultimately forcing the school board to take notice.

Eventually, the Chicano movement shaped real changes, causing an increase in enrollment of Latinos in college by almost 25% two years following the protest (Walkout). The film producers have a personal reason for bringing into film one of the most compelling dramas which transpired in the history of the Mexican-Americans. The film director, Edward James Olmos, who also formed part of the cast of characters as one of the school board members has East Los Angeles as his place of birth (Walkout). It is also where he was raised.

Olmos has long been a fervent and supportive advocate for change among the Mexican-American community. Moctesuma Esparza, the film’s executive producer was one of the original members who staged their protest in 1968. Edward James Olmos’s son, Bodie Olmos played the role of Esparza in the film. The daughter of the executive producer, Tonantzin Esparza is also among the cast of characters. The children of the original protesters were also casted in the film (Walkout). Other critics may claim that it is not the best film ever made for its genre.

Nonetheless, its emphasis on the youth-led struggle remains inspirational for present day activists. The younger generation still wages the battle against war of all kinds, poor quality of education, racial discrimination, and reactionary policies among others until this very day. It leaves a timeless message that change is possible when concerned people will unite to fight a cause for the common good.

Movie Review of the Walkout. (2017, Feb 09). Retrieved from https://studymoose.com/movie-review-of-the-walkout-essay 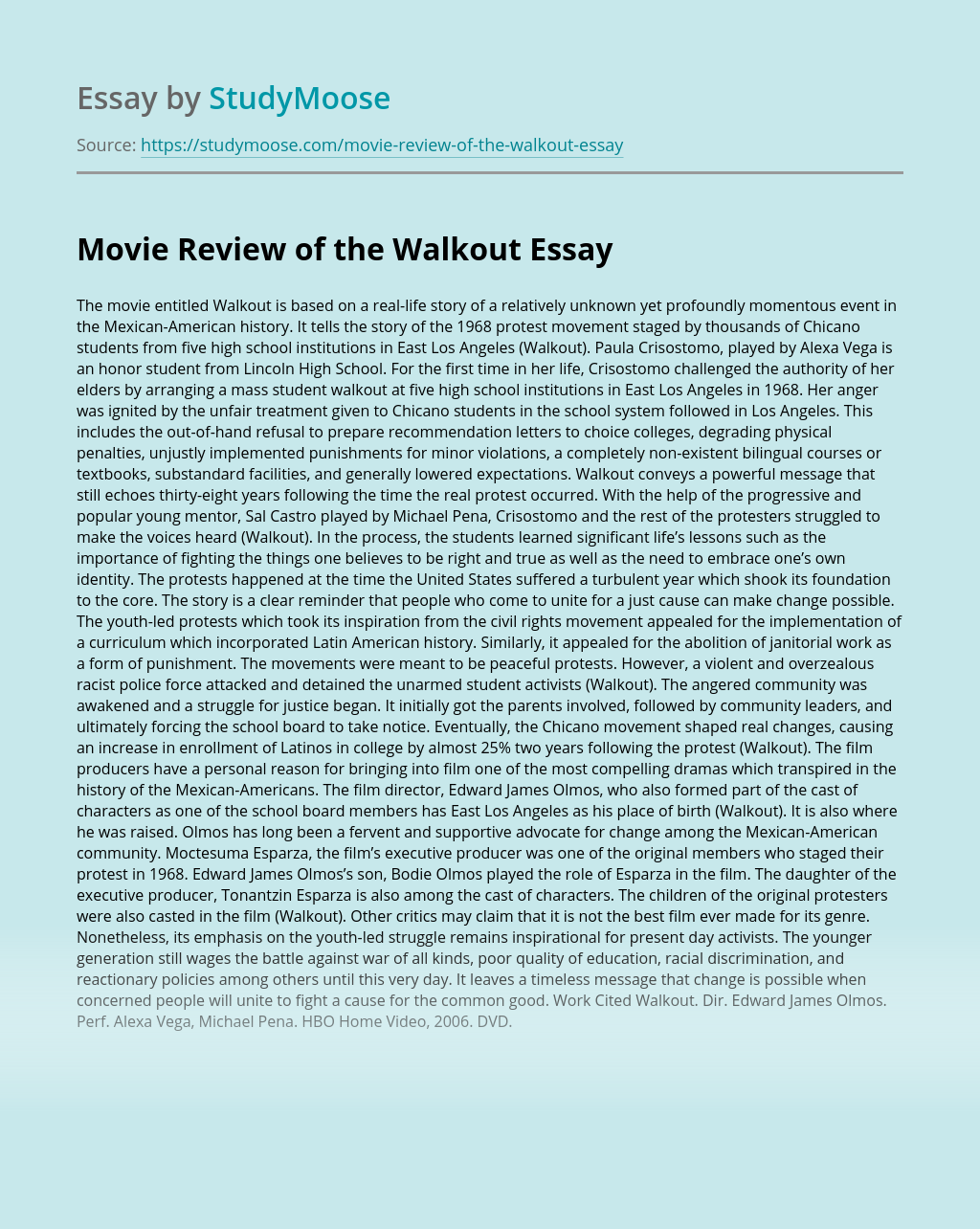