Motifs in Oscar Wilde's The Picture of Dorian Gray

“If this girl can give soul to those who have lived without one, if she can create the sense of beauty in people whose lives have been sordid and ugly, if she can strip them of their selfishness and lend them tears for sorrows that are not their own, she is worthy of all your adoration, worthy of the adoration of the world” (59). Sibyl has inner beauty and Basil realizes that, but Lord Henry and Dorian only see the physical or symbolic beauty of her form.

Don't use plagiarized sources. Get your custom essay on
“ Motifs in Oscar Wilde’s The Picture of Dorian Gray ”
Get custom paper
NEW! smart matching with writer

This is contrary to the reoccurring idea that beauty is only skin deep like Dorian for example he is beautiful on the outside but horrible on the inside. For the wonderful beauty that had so fascinated Basil Hallward, and many other besides him, seemed never to leave him. Even those who had heard the most evil thing against him, and from time to time strange rumours about his mode of life crept through London and became the chatter of the clubs, could not believe anything to his dishonour when they saw him” (93).

Shows how society judges people by their looks. They project the desirable traits that they believe they should have, but in reality they’re the same as other people.

Even though his reputation is being questioned when people see him all they see is his beauty. “He grew more and more enamored of his own beauty, more and more interested in the corruption of his own soul” (93). Morbid fascination with the portrait. Its so horrifying but he can not look away.

“I have got through all that,” said Dorian, shaking his head, and smiling. “I am perfectly happy now. I know what conscience is, to begin with. It is not what you told me it was. It is the divinest thing in us. Don’t sneer at it, Harry, any more — at least, not before me.

I want to be good. I can’t bear the idea of my soul being hideous. ” (142). Dorian is still completely obsessed with his looks so in an attempt to purge himself he “spared an innocent thing” but because he did it because he did not want to look old and horrible it was still a selfish act. He was trying to convince himself that the death of Alan Campbell was not his fault. Conscience/Soul: “Conscience makes egotists of us all” (75). Dorian’s conscience was his portrait it showed him all the sins he committed throughout is life. It made him obsessed about his looks.

The more you think of all the things you do the more you forget about the people around you. “His unreal and selfish love would yield to some higher influence, would be transformed into some nobler passion, and the portrait that Basil Hallward had painted of him would be a guide to him through life, would be to him what holiness is to some, and conscience to others, and the fear of God to us all. There were opiates for remorse, drugs that could lull the moral sense to sleep. But here was a visible symbol of the degradation of sin.

Here was an ever-present sign of the ruin men brought upon their souls. ” Portrait was like a mirror of his soul, his true self. The portrait would always be the one thing that would constantly remind him of all his sins in life, while opium could help him forget the things that were haunting his mind the portrait was a constant reminder of everything he did wrong. “Choice is taken from them, and conscience is either killed, or, if it lives at all lives but to give rebellion its fascination, and disobedience its charm” (139).

The pursuit for pleasure is encoded in our DNA its a natural thing that we must cope with, but most times people can’t control their impulses and give in, and instead of their conscience helping them to fight the urge it is the one that pushes you to succumb to it. “The soul is a terrible reality. It can be bought, and sold, and bartered away. It can be poisoned, or made perfect. There is a soul in each one of us. I know it” (158). Dorian’s soul was corrupted after the influence of Lord Henry, and he sold it to stay young forever.

A soul means nothing to Dorian he does not even believe in it anymore. “He looked round, and saw the knife that had stabbed Basil Hallward…. As it killed the painter, so it would kill the painter’s work, and all that that meant” (164). When Dorian stabbed the painting it was similar to when he stabbed Basil. In the beginning Basil said he put his soul into the painting, then after that it became Dorian’s soul.

They were linked, he could not destroy the painting without destroying himself. Influence: He was conscious and the thought brought a gleam of pleasure into his brown agate eyes that it was through certain words of his, musical words said with musical utterance, that Dorian Gray’s soul had turned to this white girl and bowed in worship before her. To a large extent the lad was his own creation” (42). This is where Dorian starts his descent into a sinful life. Lord Henry influenced him into falling in love with “poetry” or art. The only reason he fell “in love” with Sibyl was because he saw her as living art, her passion for acting fueled his passion for her. “If one doesn’t talk about a thing, it has never happened” (79).

A saying by Lord Henry, denying that something happened helps you get over it faster so you have no sorrowful feelings, you just push it out of your mind or seek pleasure to distract yourself. “A strange sense of loss came over him. He felt that Dorian Gray would never again be to him all that he had been in the past. Life had come between them.. ” (58). Lord Henry’s influence ruined the pureness of Dorian. He now embraced hedonism which corrupted him and made him vain and hateful. “A man who is master of himself can end a sorrow as easily as he can invent a pleasure. I don’t want to be at the mercy of my emotions.

I want to use them, to enjoy them, and to dominate them” (79). Lord Henry said something similar when Sibyl died. Its goes against the ideology of Hedonism to be sad or regretful because you are supposed to be in pursuit of happiness. “The mere fact of having publish a book of second-rate sonnets makes a man quite irresistible. He lives the poetry that he cannot write. The others write the poetry that they dare not realize” (41). This shows the relationship between Lord Henry and Dorian. Lord Henry influenced someone with the idea of Hedonism, while he himself did not completely indulge himself in that lifestyle.

While Dorian is pursuing every pleasure that he can find. In a way Lord Henry is living through Dorian. Hedonism: “There was an exquisite poison in the air. I had the passion for sensations…… Well, one evening about seven o’clock, I determined to go out in search of some adventure. I felt that this grey, monstrous London of ours, with its myriads of people, it sordid sinners, and its splendid sins, as you once phrased it, must have something in store for me” (35). Dorian now feels the need to satisfy his hedonistic craving. He realizes the world is not pure or innocent anymore and that there is many ways to sin and indulge himself.

Pleasure is the only thing worth having a theory about…… But I am afraid I cannot claim my theory as my own. It belongs to Nature, not me. Pleasure is Nature’s test, her sign of approval. When we are happy we are always good, but when we are good we are not always happy” (56-57). Lord Henry believes that morality does not promote happiness, and we must experience pleasure because that is a huge part of life. If everyone pursued pleasure the world would be happier and more ideal. “Believe me, no civilized man ever regrets pleasure, and no uncivilized man ever knows what pleasure is” (57).

Same idea, the world is better off with pleasure, it will make the world happier, although upper class receive the most pleasure because they can afford all the luxuries of life. While lower class people can only imagine what true pleasure is because they are to busy worrying about other things they don’t the time nor fund to indulge in the finer things. “Beautiful sins, like beautiful things, are the privilege of the rich” (57). Dorian lives this saying. He lavishes himself with the most luxurious items because he has the money to do so.

Having fancy objects in life is purely for the aesthetic pleasure that we receive from them, and repeating the word beautiful emphasizes and glorifies the idea of pleasure. “Difference of object does not alter singleness of passion. It merely intensifies it. We can have in life but one great experience at best, and the secret of life is to reproduce that experience as often as possible” (145). Pleasure and passion are universal emotions that can be felt anywhere. Repeating that emotion can help you feel younger, it will take you back to all the other times you felt that way, its another way of reminiscing.

Motifs in Oscar Wilde's The Picture of Dorian Gray. (2017, Jan 19). Retrieved from http://studymoose.com/motifs-in-oscar-wildes-the-picture-of-dorian-gray-essay 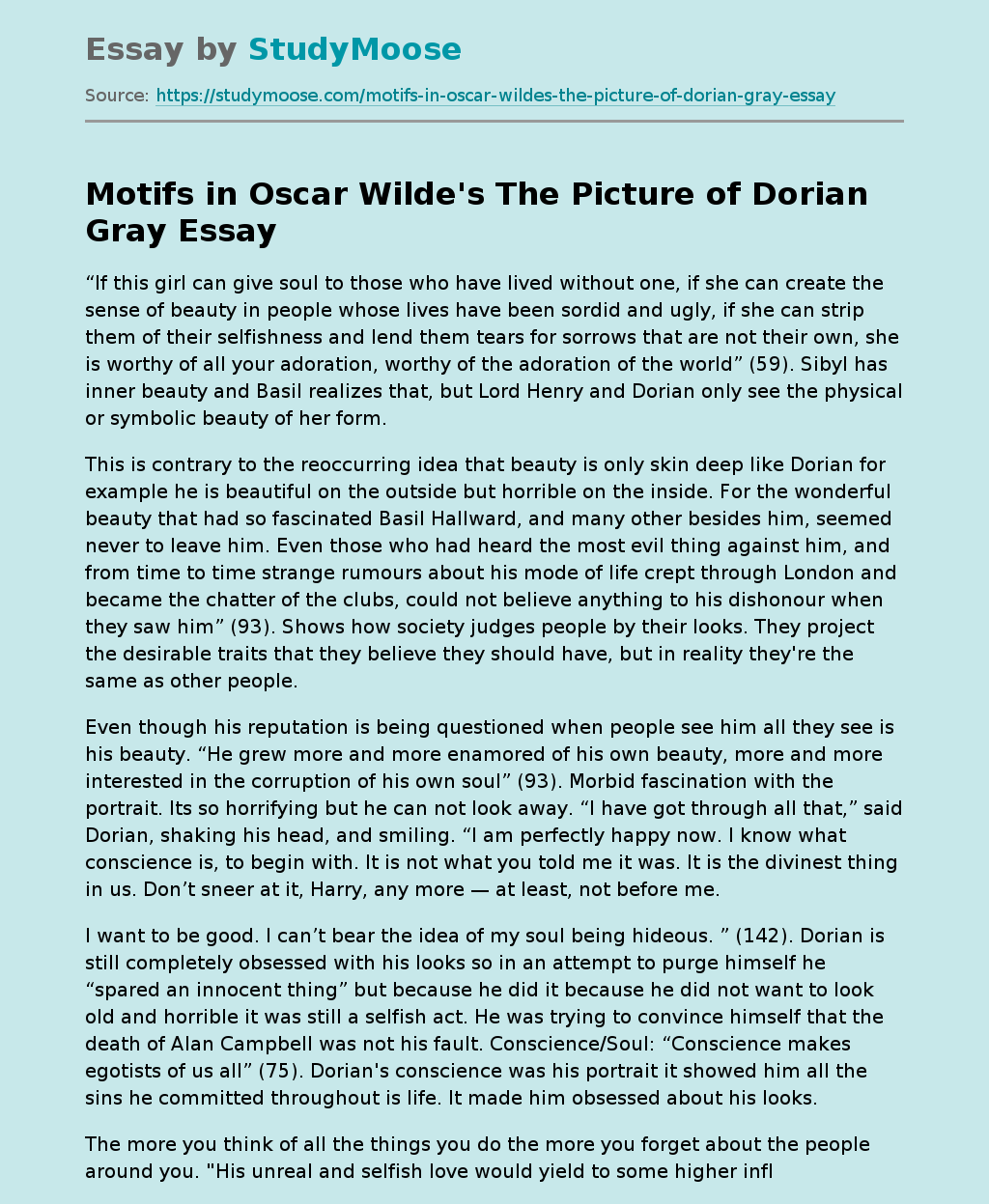