Moral Law Vs Natural Law In The Scarlet Letter

Moral Law Vs. Natural Law “At the dramatic center of The Scarlet Letter is the idea of the awesomeness and inescapability of the Moral Law, to which all else is finally submitted,” (Levy 384).

Assuming that Hawthorne wrote The Scarlet Letter exploring the relationship between Moral law and Natural law, he chooses the moral laws to be absolute. Using definitions of nature and character provided by Seymour Katz applied to the terms natural law and moral law allow an extension of Leo Levy’s claim that Moral laws are supreme.

Don’t waste time
Get a verified writer to help you with Moral Law Vs Natural Law In The Scarlet Letter
Hire verified writer
$35.80 for a 2-page paper

Moral law is an internalization of normalizing aspects of society it, “is acquired in time through nurture, education, and social experience. The older the individual the more fixed and stable is his character, and the less likely he is to act outside of the principles of his society or his role,” (Katz 5). The natural law is being in a condition where society cannot impose any rules or laws, “It is undirected impulse or potential energy which the individual will expend and express in various ways in the course of his life,” (4).

By applying the definitions of natural law and moral law to the way Hawthorne reveals the truth in the novel and to the development of the character Pearl, Hawthorne proves that moral law is the dominant form of law in The Scarlet Letter.

In the forest natural laws should be supreme. Here, the black man or devil makes his home, Mistress Hibbons goes to perform her witchcraft, and Hester and Dimmesdale commit their adultery (Hawthorne 144-145).

Moral law forbids each of these three things. Only in the forest, a place where moral law does not apply, can any of these things happen. From a very early age people are taught by the moral laws that the forest contains evil.

“But she fancied me asleep when she was talking of it. She said that a thousand and a thousand people had met him here, and had written in his book, and have his mark on them. And that ugly-tempered lady, Old Mistress Hibbons, was one. And, mother, the old dame said that this scarlet letter was the Black Man’s mark on thee, and that it glows like a red flame when thou meetest him at midnight, here in the dark wood.” (126) Pearl, at the age of seven, already understands the forest contains evil. This normalizing aspect of moral law teaches the society that the representation of natural law, the forest, is evil. Thus, the moral laws quickly gain an advantage over the natural, before an individual is old enough to form their own opinion on the matter.

Another way the moral law proves to be supreme is when examining another theme in the text, hypocrisy. The hypocrisy is so wide spread, even the Reverend Dimmesdale, introduced possessing an, “eloquence and religious fervor [having] already given the earnest of high eminence in his profession,” (48). This quality combined with a, “dewy purity of thought, which, as many people said, affected them like the speech of an angel,” (48) caused Dimmesdale to be perceived as a model of purity and godliness for his congregation despite committing a sin incomprehensible to them. Even after his confession his society does not believe the truth that Dimmesdale committed adultery. This shows how strong the character of Dimmesdale is imagined to be by his people.

Because the truth is often obscured by hypocrisy, where the truth is found there will be a very strong reflection on the relationship between moral law, and natural law. In the forest, when Pearl asks Hester what the scarlet letter means and why she wears it, Hester lies to her child for the first time. “What does the letter mean, mother? -and why dost thou wear it?”¦.And as for the scarlet letter, I wear it for the sake of its gold thread! In all the seven bygone years, Hester Prynne had never before been false to the symbol on her bosom,” (123). Hester lies to her child for the first time while they are in the forest because she is taught to be ashamed of her sin by the moral laws. These laws have a far-reaching power; their effect is felt even in the forest, the idealization of natural law.

The truth about Chillingworth’s character reveals itself at the strongpoint of moral laws, the scaffold. This device serves as the deterrent for criminals where they are displayed for the public’s entertainment. “In fact, this scaffold constituted a portion of the penal machine”¦but was held, in the old time, to be as effectual an agent in the promotion of good citizenship, as ever was the guillotine among the terrorists of France”, (41). The scaffold punishes people for crimes committed violating the moral laws by exposing the perpetrator to public ignominy. The true nature of Chillingworth’s character is revealed while Dimmesdale, Hester, and Pearl are performing a midnight vigil on the scaffold.

“To his features, as to all other objects the meteoric light imparted a new expression; or it might well be that the physician was not careful then, as at all other times, to hide the malevolence with which he looked upon his victim”, (107). This revelation occurs at the pinnacle of the puritan penal system, the enforcing agent of all moral laws. Even though the “meteoric light” might be interpreted as an act of nature, this is not the case. It comes from the heavens where the puritan society acquires the religious justification to carry out their laws. Thus the moral law is responsible for providing the truth to the reader in this instance.

Another symbol coming from the forest are the Indians. They live in the forest and only periodically come under the jurisdiction of moral laws by entering a city or town. Because of this their actions and ideas can be interpreted to represent the position of natural law. In the instance when they interpret the meaning of the scarlet letter during the election day sermon their interpretation that, “the wearer of this brilliantly embroidered badge must needs be a personage of high dignity among her people”, (167) is the exact opposite of what the symbol was originally intended to mean. The symbol for nature in this case considers the scarlet letter a boon. In contrast, the scarlet letter was originally intended to be a punishment having the “effect of a spell, taking her out of ordinary relations with humanity, and inclosing her in a sphere by herself”. (40) This was the original function, which the moral law dictated the letter should serve.

Although the letter comes to symbolize many different things throughout the text, the only one, which is relevant to examine, is the one it was intended for. Because the moral and natural laws dictate different meaning upon the scarlet letter, one positive and one negative, which one is actually the dominant meaning? The negative meaning is the dominant one; this is because the letter serves its original purpose separating Hester from her society. She lived in a house on the outskirts of the town, not in it and whenever she was in public her fellow citizens would form circles around her. The letter is a negative symbol throughout every part of the novel barring the conclusion, and because of this the moral laws succeeded in imposing their meaning upon the letter.

Another conflict between moral and natural comes in the upbringing of Pearl, Hester’s daughter. She is similar to a wild spirit and is ostracized from society similar to Hester. “Pearl was a born outcast of the infantile world. An imp of evil, emblem and product of sin, she had no right among christened infants”, (65). She was never part of her society, failing to adhere to moral laws. As a child, she had no conception of the moral laws and acted accordingly. “‘The little baggage hath witchcraft in her, I profess’, said [Mr. Wilson] to Mr. Dimmesdale. “˜She needs no old woman’s broomstick to fly withal.'” (80).

In addition to the fact that the upright citizen Mr. Wilson compares Pearl to a witch, she did not understand her religion stating, “‘He did not send me!’ cried she, positively. “I have no Heavenly Father!'” (68). By not understanding religion she was not abiding by the moral laws. While still a child Pearl is unaffected by the moral laws but as she grows older she begins to adhere to them. By the end of the novel she is entirely assimilated into the moral culture. She had taken a husband and was living a typical life in Europe (177). By taking a husband she is adhering to the moral laws. While she began her life following the natural laws they eventually were overpowered by the pervasiveness of the moral. The moral laws are so powerful she could not resist their influence.

Another assertion of the power of the moral laws in relation to Pearl occurs during the forest scene spanning chapters sixteen through nineteen. Here: Hester, Dimmesdale, and Pearl meet for the first time after the scaffold scene. During these chapters Hester takes off her scarlet letter to prove to Dimmesdale that they can be free of the present situation if they go somewhere else in the world (137). Once Pearl sees her mother without the letter she immediately does not recognize her and becomes scared.

“‘I see what ails the child,’ whispered Hester to the clergyman, and turning pale in spite of a strong effort to conceal her trouble and annoyance. “˜Children will not abide any, the slightest, change in the accustomed aspect of things that are daily before their eyes. Pearl misses something which she has always seen me wear!'” (142) Even in the forest where natural laws reign, Pearl will not approach her mother without Hester wearing the scarlet letter, the symbol the moral laws imposed upon her. The moral laws extend far beyond the edges of towns and cities expanding even into the forest.

Hawthorne rejects natural laws by asserting the dominant position and influence of the moral laws. By noticing when and how Hawthorne offers the truth to the reader such as when Hester lied to Pearl in the forest setting or when Chillingworth’s character is revealed under the scrutiny of heavenly light, the moral laws are dominant. Even the chief symbol of the book, the scarlet letter, has a meaning imposed solely by the moral laws. Another character originally having a natural tendency, Pearl, loses that tendency by the end of the novel. In all of these instances the moral laws prove that they are stronger and more pervasive than the natural laws.

Moral Law Vs Natural Law In The Scarlet Letter. (2016, Jul 13). Retrieved from http://studymoose.com/moral-law-vs-natural-law-in-the-scarlet-letter-essay 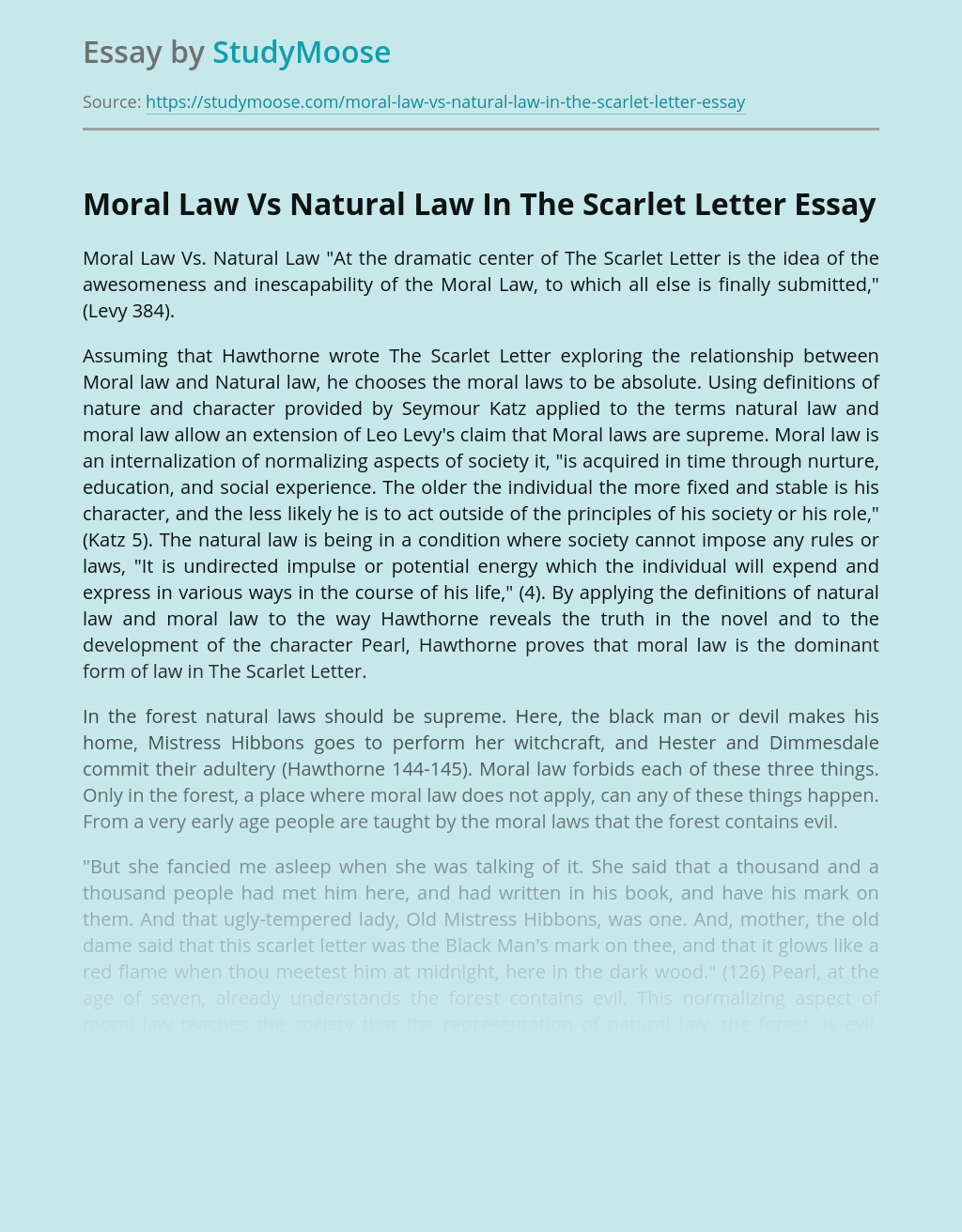 Don’t waste time
Get a verified writer to help you with Moral Law Vs Natural Law In The Scarlet Letter
Hire verified writer
$35.80 for a 2-page paper
Stay Safe, Stay Original