2. Evaluate the achievability of the company objectives for Montreaux USA. Identify the most salient (or important) aspects of the chocolate confectionary industry, globally and domestically, that are critical for understanding a new product introduction of this type. Provide support for your conclusions.

The objectives that Montreaux USA wants to achieve in the coming 3 years are national distribution of the new Montreaux product line, $15 million in annual sales, and to be within the top 25 in revenue. Accounting for 52.6% of the market, chocolate is the most profitable segment of the confectionary industry.

Don't use plagiarized sources.
Get Your Custom Essay on Montreaux Chocolate Case Just from $13,9/Page

In 2011, Europe captured the largest regional share of the global confectionary market at 45.2%, with the Americas following at 33.9%. The U.S. chocolate market is expected to grow almost 2% annually through 2015. The data shows that the demand for chocolate is increasing and that introducing a new chocolate product could prove to be very profitable. Not only is the U.S. chocolate market growing, but the U.S. consumer’s focus on fitness and health is growing as well.

There seems to be a perfect niche for Montreaux USA to introduce their new, healthier dark chocolate with infused fruit flavors. Apollo has been very successful introducing new products and their brand name brings even more value to the product. The extensive research conducted proves that there is a growing market for a low-calorie, dark chocolate product. With Apollo’s resources and Montreaux’s chocolate expertise, they should have no problem introducing their product and achieving their company objectives. However, successful product introduction will attract competitors along with new product innovations. It’s crucial that they have a plan ready for the increased competition or they might not be able to achieve their company objectives.

These goals are achievable by Apollo-Montreaux as Apollo in itself has a revenue of $54.4 billion in 2011 and are 2nd in the Global market with a share of 15.4%.

1)To create a market of a European chocolate which leads the global market share of confectionary market with 45.2% in USA which is 2nd in the global market with 33.2% has to be done carrying European Heritage and culture along rather than branding it as a All American chocolate. People associate Apollo with gums and candies and with this only it ranks number 2 globally. Hence this opportunity of Apollo jumping into the chocolate arena with collaboration with Swiss company would prove fruitful. Also Apollo in the past 3 yrs. has innovated 70 new products and all have been successful so there is strong credential and brand value that Apollo carries with it which will be beneficial.

2) The target audience of these chocolate was set to be people from the age group of 45-64.In USA the population in this category is approx. 27%(2011) and also we know that 57% of females and 43% males are daily chocolate eaters. The annual per capita consumption of chocolates in this group is 119 in 2010 as compared to 113 in 2006 so considering this as well the future of target audience would be positively affected. It had been seen in the past few years the people were getting health conscious and had started preferring dark chocolates which would reduce chances of high cholesterol and also providing cardio vascular benefits. So considering the above the target audience would be married women in this age group.

The distribution channels for these chocolates should be supermarkets which amounts to 34% of the confectionary retail value sales in 2009.As this would concentrate in the 19.7% of the premium market ($4.92) they should market it extensively through Walmart from where 45.3% of chocolates were sold in 2011 having these new chocolates in their stores.

Through a research it is said that 28% of the people eat chocolates outside their home in USA so to reach this market there should be small mobile stores of Morteaux chocolates especially in southern USA which amounts to 40% of the chocolate consumption in USA. This is a way to attract those people who eat chocolates on the move and also creating an image and recall value in the minds of the consumers so that even if they don’t buy at least the name, logo would remain in their minds.

5) Shape of the chocolate

As given in the research in the target group of 45-64 yrs., 38% of them prefer pieces of chocolates in USA. So knowing this figure the Montreaux should create pieces of chocolates as well other than the bars and candies. Also like about 57% are target market is female so different and fancy shapes like hearts and diamonds too would attract the customers.

As by research about 44.3% people like eating chocolates while watching TV, so as we know that number of digital shoppers in USA is 191.1 million so this selling these chocolates through the online would increase its market leaps and bounds and the results would be evident.

By October 2012, it had been over 15 months since Apollo Foods, a global consumer packaged-goods firm, had obtained the rights to distribute the well-known European chocolate company, Montreaux, in the United States. Andrea Torres, the director of new product development at Montreaux Chocolate USA, is presented with the challenging task of introducing a new product and obtaining a position in the U.S. market. At an upcoming board meeting, December 10th, Torres is expected to give a presentation describing the status of the Montreaux acquisition and plans for new product introduction in the U.S. market.

Andrea Torres must make one of the following decisions; to further test the product, pursue test marketing in selected markets, launch the product through a regional rollout plan, or launch the product nationally. In addition to these decisions, Torres must also be prepared to address the topics of a product name. When presenting to the board, Torres must be confident that her recommendations will help Apollo achieve its three year objectives. These objectives include national distribution of the new Montreaux product line, $15 million in annual sales, and to be within the top 25 in revenue.

We have made the decision to recommend a national release of the new product under a sub-brand name, Healthy Cravings, to target the health conscious consumers. Our interpretation of the data provided suggests that this will provide the most successful product introduction and allow Montreaux USA to achieve its company objectives.

We have concluded that a national launch under the sub-brand name, Healthy Cravings, would provide the most successful product introduction. US consumer’s increased emphasis on fitness and health has provided a market segment that Montreaux USA can capitalize on with their new product. Including the health benefits of dark chocolate and the antioxidants from the infused fruit flavors on the packaging will help highlight Montreaux USA’s healthy positioning.

We also recommend that Montreaux USA should introduce their new product in exhibition stalls, coffee shop shelves, and other point of purchase locations in stores. Successful product introduction will surely attract competitors to imitate Montreaux USA’s product. To sustain a competitive advantage we recommend that they start developing new product line extensions. Apollo already specializes in candy and gums so they should consider introducing dark chocolate candies. With our recommendations, Apollo’s resources, and Montreaux’s chocolate expertise we believe that a successful product introduction can be accomplished and the three company objectives achieved. 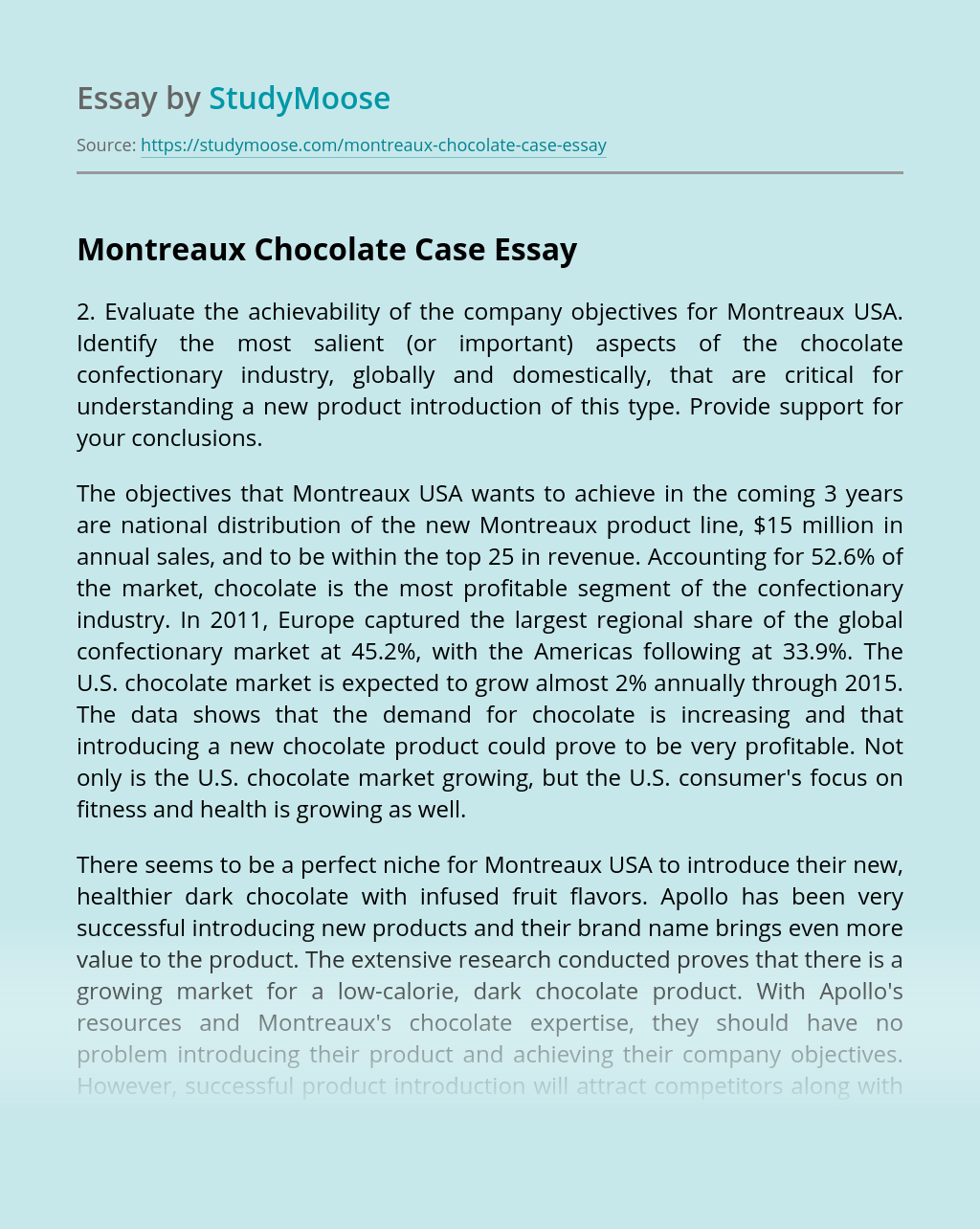 Symbolism in The Necklace by Guy De Maupassant

A lady’s function in today’s society is one where she can much better herself through her career and who and whether she marries is her choice. In the Victorian world of Guy De Maupassant while writing The Necklace in the year nineteen eighty-five, the world is various. One of the most effective women in the...

The Competitive Nature of Current Industries

The immigration act of 1924

Before Congress passed the Immigration Act of 1924, there were several restrictions for immigrants who desired a better life in the United States. “Immigrants and anyone else perceived as “un-American” seemed to threaten the old ways” (Nash pg. 749). Several Acts had been passed, one of them passed in 1882 prohibited the entry of criminal,...