From Cocoa to Chocolate

Chocolate comes from the cacao bean, which comes from a cocoa tree, which are found in Central America. Mayans The Mayans found the cocoa trees down in South America, and then migrated up to Central America, where their empire stretched from the Yucatan Peninsula to the Pacific Coast of Guatemala. The Mayans are known for being the first people to create plantations, where they had people working on a cacao bean plantation. They also referred to the cacao bean as the “food of the gods.

Don't use plagiarized sources. Get your custom essay on
“ From Cocoa to Chocolate ”
Get custom paper
NEW! smart matching with writer

” Aztecs The Aztecs then conquered the Mayans. The Aztecs would tax anyone who they conquered who grew the cacao beans to pay them as taxes. In fact, the Aztecs used cacao beans as currency, and it was always in demand. No one outside of the Americas would hear of this magnificent drink (as it was used for early on) until about the 15th century. European Influence Christopher Columbus was the first European in the Americas, who was also the first to find cacao beans.

He brought these cacao beans back to the Spanish king, whose friars sent the word of it throughout Spain. When the Spanish conquered the Aztecs, cacao beans were imported and changed into a chocolate drink, and was widely popular along the people. They would remove the chili pepper and add milk, sugar, and vanilla to give chocolate a sweet taste. They used chocolate as a drink until the Industrial Revolution. Post-18th Century Chocolate The chocolate we know today is created by mills that could create cocoa butter.

This cocoa butter made it to where chocolate could become hard. After the Industrial Revolution, people began to sell these mills and “cocoa butter” to other people. A man by the name of Daniel Peter bought one of these, and began work on a new type of chocolate, called “milk chocolate. ” This milk chocolate was toyed with quite a bit until Rodolphe Lindt invented conching, and this allowed for Milton Hershey to make chocolate famous and mass produce a cheap candy bar. This leads us up to the chocolate we eat today!

From Cocoa to Chocolate. (2017, Mar 23). Retrieved from https://studymoose.com/from-cocoa-to-chocolate-essay 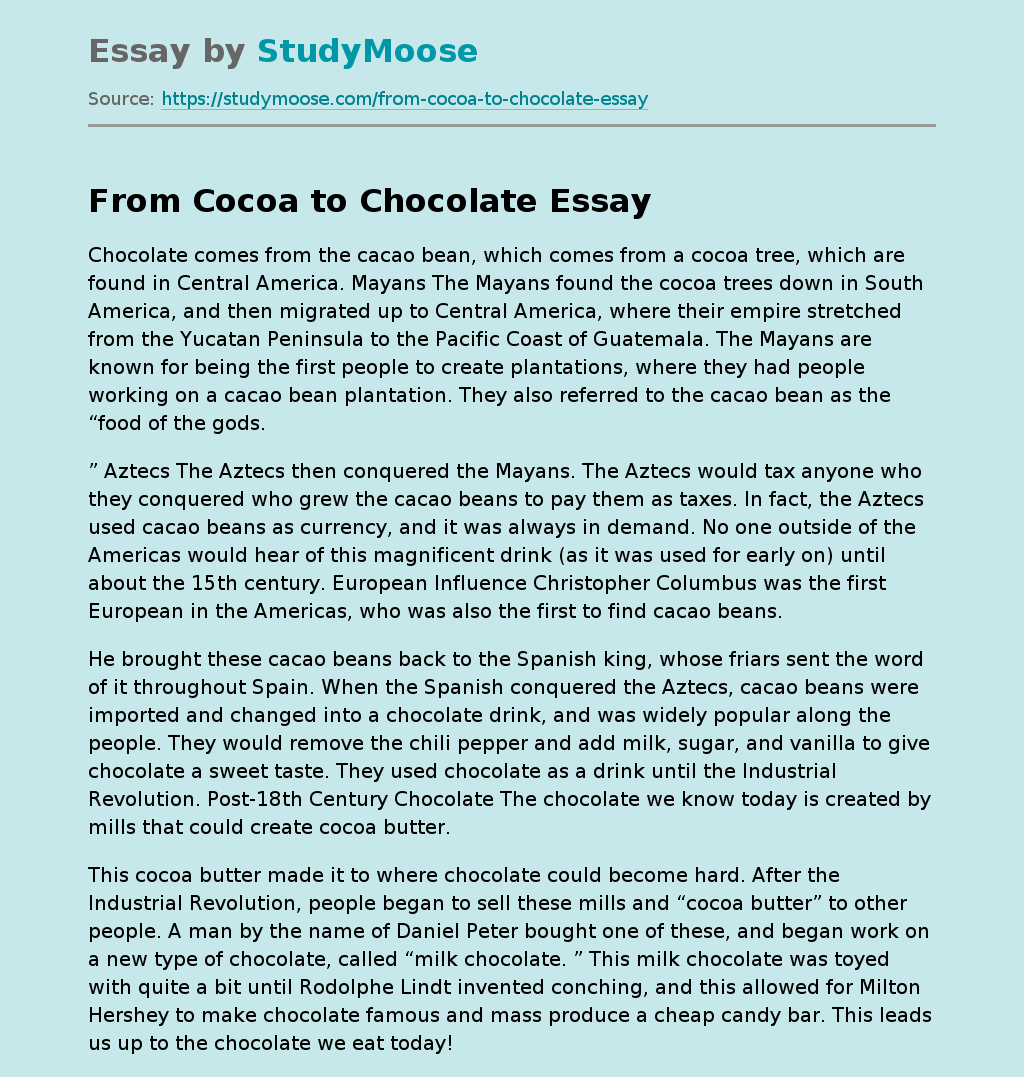