Mongols - How Barbaric Were the "Barbarians?

The Mongols began to rise to power under the great Genghis Khan, and during the 13th century they created the largest empire in history. The Mongols during the 1300s were very known, and feared by many, it was almost rare to find areas that hadn’t heard of the Mongols. These “barbarians” ruled over many areas, expanded across almost all of Asia; and killed millions of people wherever they went. Mongols ruthlessly slaughtered many people, and used many tactics to ensure their victory.

Don't use plagiarized sources. Get your custom essay on
“ Mongols – How Barbaric Were the “Barbarians? ”
Get custom paper
NEW! smart matching with writer

The Mongols had built such a reputation that some areas would surrender without putting up a fight, while others formed armies of thousands with their best weapons and men; but all were crushed once the Mongols arrived. The Mongols were ruthless killers and reduced the populations of areas greatly, caused people’s lives to be ruined; and were not even mentioned in the history of certain areas, because of the horrible things they caused. But despite all these things the “barbarians” caused, they also helped many areas to develop; and improve trade and many other factors.

Mongols are ruthless murders who didn’t mind in killing others, and were known for slaughtering millions people in history. They even severed the heads of men, women, and children where they conquered, and even made separate piles for them. As described by Ata-Malik Juvaini, Mongols would kill everything in towns including animals so there was no one left (Doc. E). People would record the amount of people the Mongols killed, and some weren’t even able to make out a specific number because of how much the Mongols killed! Even Persian manuscripts that were found illustrated men being buried alive, and Mongols shooting men constantly with their arrows (Doc.

This illustrates how ruthless the Mongols were, and the horrible things and ways they killed people were done. In addition, John of Piano Carpini stated the different tactics used by Mongol, which allowed them to take over fortresses with their gruesome tactics (Doc. D). One of many things the Mongols did, was take the fat of people they killed, melt it, and catapult it onto houses and fortresses. “And wherever the fire falls on this fat it is almost inextinguishable.” The Mongols would even trick people into surrendering and take the people they want, and then kill the rest with an axe. As a result, the Mongols gained the reputation they did, as ruthless men who plundered through cities killing everyone along the way. But there is always another side to every story including this one, and these barbarians were not as “barbaric” as they were described, but also helped societies develop and create a foundation for their future.

The Mongols are not credited enough for the good things that they did, as much as the bad things that they did. And if you were to weigh the good and bad deeds they committed, the bad deeds would not outweigh the good, and the scale wouldn’t topple over, but instead; it would almost balance out. It is true the Mongols killed thousands of people and destroyed areas, but as time went on, the Mongols increased the economies of areas, became more tolerant, and even blended in with other societies. The Mongols would not have been able to achieve this if they didn’t conquer all the areas they did, and although they made many sacrifices along the way; the Mongols managed to triumph over the largest area conquered in history, and at the same time improve and raise the population in these areas (Doc. A). Moreover, one example of something good the Mongols did, was help improve the economies of areas; especially Persia and China. Described by Charles J. Halperin, Mongols in Yuan China continued the Grand Canal which improved transportation and communication with other areas. (Doc. J). This helped increase trade which allowed many people to gain new products and become wealthier, contributing to their economy.

In addition, this was very important to people in China and to other areas, because the Mongols had united China; which had many products it would then share with the world. Especially the silk from China became popular, and the Persian silk industry greatly benefitted China opening up to the rest of the “world.” The Mongols not only increased trade in areas, but also stopped crimes and theft in many nations as stated by Paul Ratchnevsky (Doc. K). It was said that people who lived under Mongol rule did not even have locks or bolt on their carts or houses because of how safe the environment was. The Mongols made sure it was safe everywhere, and once the people abided by the rules; they would not be punished. More so, a document compiled by Marco Polo, described the system of messengers and how organized it was (Doc. L). There were posts set up, and the Mongols built roads so messengers and travelers could go from place to place easily. Each post had horses specially for the messengers, and there were even ferry’s to cross over water. This displays how the Mongols not only killed and conquered people, that they were also capable of setting up organized systems and build roads. Furthermore, Mongols also had tolerance for different religions, and even took interest in them.

For example, William of Rubruck composed a document of Mongke Khan who was a Mongol ruler, curious of other religions (Doc. M). Mongke sent his scribes who told the people which included Christians, Buddhists and Muslims, to come together and form a conference; and write down what they say so Mongke can “know the truth.” The men did as they were told, and Mongke did not say they were wrong, but instead he stated that the Mongols believe in one God, “But just as God gave different fingers to the hand so has he given different ways to men.” This illustrates how the Mongols did not criticize others for following their religion, but accepted their beliefs and still stuck to their own, letting them live their lives.

The Mongols were viewed as ruthless killers who slaughtered millions of people with no mercy, and caused many cities to perish. Although Mongols committed many horrific acts which will never be forgotten, it is also important to take in account the good things these “barbarians” did. The Mongols helped improve the economies in areas, promote trade which allowed societies to further develop and modernize. Mongols also created many systems and roads which increased communications with other areas, and caused cultural diversity. Many missionaries set out to convert others since it was easier to travel, and they succeeded; especially in China. Therefore, the Mongols were cruel murderers and were feared by many because of the horrible things they did. But it would not be valid to say they only did bad things, because they impacted history in a positive way too; and these “barbarians” helped societies further develop, modernize, grow in wealth, size, and create a political system for the future which is still used today.

Mongols - How Barbaric Were the "Barbarians?. (2016, Mar 13). Retrieved from http://studymoose.com/mongols-how-barbaric-were-the-barbarians-essay 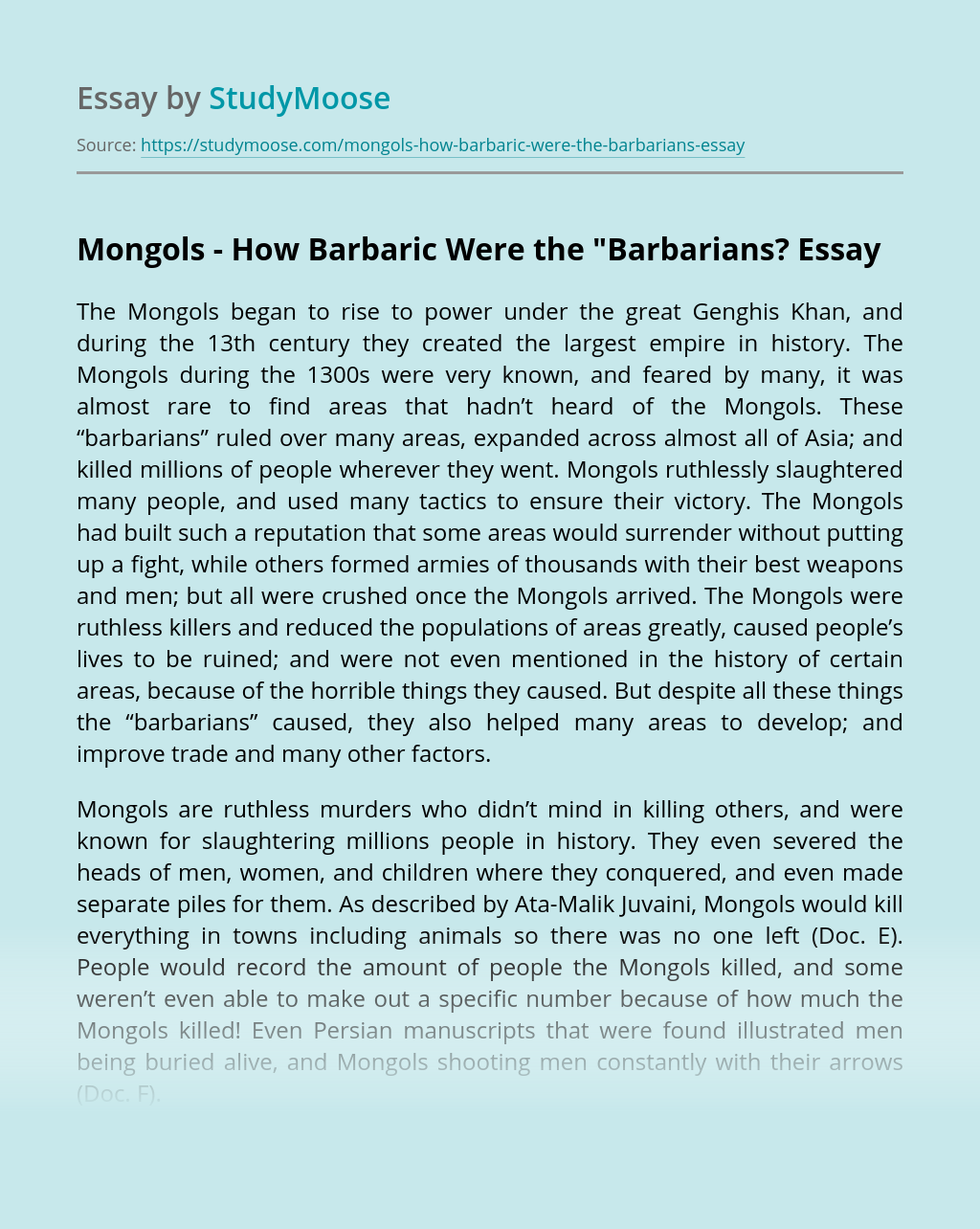