In Mohandas Gandhi’s speech “Economic and Moral Progress” emphasis is placed on distinguishing the difference between economic and moral progress.

From Gandhi’s experience and studies he recognizes that economic and moral progress are often opposing and interchangeable. Gandhi states that he knows little of economics but was more that happy to speak on the topic because of his strong belief in the importance of moral progress over economic progress. Gandhi relies primarily on religious text coupled with all three rhetoric devices to exemplify his argument.

Don't use plagiarized sources. Get your custom essay on
“ Mohandas Gandhi: A Moral/Economic Progress ”
Get custom paper
NEW! smart matching with writer

Gandhi quotes the bible in saying “Take no thought for the morrow” meaning one should seek morality over material advantage, an idea prevalent “in almost all the religious scriptures in the world”(Gandhi 334) and it is this very idea with which Gandhi argues. Gandhi views economic progress and moral progress as two singular properties.

Gandhi makes the assumption at the beginning of his speech that economic progress refers to one’s materialistic wealth while moral progress refers to “real progress” (Gandhi 334) Gandhi introduces his idea of what defines moral progress by asking “Does not moral progress increase in the same proportion as material progress?” (Gandhi 334) In this question Gandhi is examining the relationship between economic and moral progress. Gandhi states that it is popular belief that “material progress does not clash with moral progress”, so it must necessarily advance the latter. Gandhi exemplifies this popular idea and applies it to the “case of thirty millions of India stated by the late Sir William Wilson Hunter to be living on one meal a day” this case built on the idea that before attending to one’s moral welfare their daily needs must first be satisfied.

Gandhi continues on state how absurd this idea it is, it is his belief that every human has the right to life, food, clothing and shelter but to obtain these things “we need no assistance from economists”(Gandhi 334) It is Gandhi’s belief that the “test of orderliness in a country is not the number of millionaires it owns, but the absence of starvation among its masses”. Gandhi’s argument relies heavily on his use of ethos in quoting religious texts as well as historical figures. It is Gandhi’s idea that economic progress does not necessarily clash or assist in moral progress, but rather acts a vehicle, which holds the possibility for either outcome. Gandhi illustrates the potential for economic progression leading to moral growth when he recalls his time in South Africa. Gandhi had observed that the people of South Africa believed that “the greater possession of riches, the greater was their moral turpitude”(Gandhi 335) meaning that the societal norms frowned upon living in excess and not sharing wealth.

Though in contrast, Gandhi exemplifies economic progress leading to moral decay when he addresses the decline and fall of Rome, Egypt and even the Hindu deity Krishna, “with them material gain has not necessarily meant moral gain”(Gandhi 335) Gandhi is not opposing the pursuit of wealth, but the pursuit of wealth for material advantage. Gandhi applies pathos to religious ideals, evident when he describes what he believes to be symbolic of material progress, he states “It is not possible to conceive gods inhabiting a land which is made hideous by the smoke and the din of mill chimneys and factories and whose roadways are traversed by rushing engines dragging numerous cars crowded with men who know not what they are after”(Gandhi 337) Gandhi’s vivid imagery successfully conveys his idea that material wealth has corrupted the values of society and stunted moral progression.

Gandhi’s speech is strongly driven by his use of ethics and emotion, but his speech also appeals to the logical mind. Gandhi’s use of logos is evident during his quotation of “the great scientist”(Gandhi 337) Alfred Wallace. Wallace, a British naturalist states that his country has put power and wealth before nature and Christianity and describes “…how as the country has rapidly advanced in riches, it has gone down in morality”(Wallace 338) Gandhi’s speech is largely based on the idea that society today upholds a distorted set of values, placing emphasis on material advantage and economic gain over moral growth and progress. Gandhi’s use of rhetoric devices appeal to a diverse audience using logic, ethics and emotion to prove that moral progress trumps economic progress. 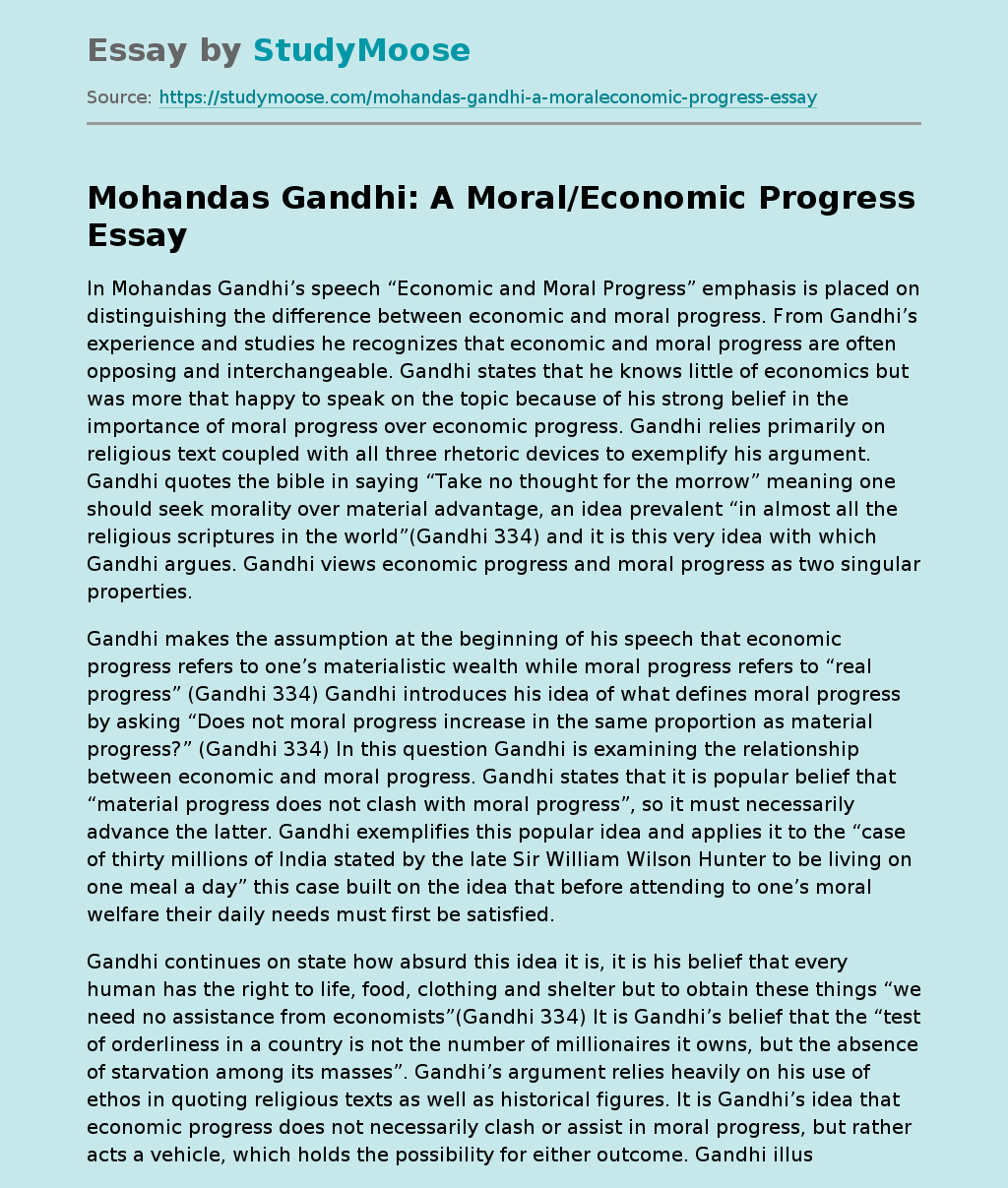