Aim of this experiment is to differentiate between the two major categories of bacteria , gram positive and gram negative. Through this experiment, gram staining skills develop. More understanding the types and morphology of bacteria. Expected experimental result, Escherichia coli (E.coli ) is a negative gram bacteria which stain pink colour , while Staphylococcus aureus ( S.aureus ) is a positive gram bacteria which stain purple colour.

Gram staining is a very importance preliminary step to differentiate the bacteria into gram positive and gram negative and also enable the bacteria to be examined using a light microscope . Bacteria are very small unicellular microorganisms. They have cell wall of peptidoglycan can reproduce by binary fission. The functions of cell wall are strength , shape , protect from osmotic lysis . It also protect cell from toxic substances and contributes to their pathogenicity . The gram stain differentiate bacteria by the chemical and physical properties of cell wall.

Bacteria which stain purple are called Gram-positive while stained pink colour are called gram negative bacteria. From the results, purple stained are obtained for E.coli and S.aurues . E.coli is a rod shaped bacteria, therefore it described as bacillus. S.aureus has irregular grapelike clusters, therefore is it coccus bacteria. Through this experiment, purple stained obtained for both bacteria, E.coli and S.aureus.

But compared to same experiment carried out by others, E.coli should be pink stained. There might be some human error in this experiment.

In gram staining, when contact with water,crystal violet dissociate into CV+ and Cl- ions. These two ions penetrate through cell wall and cell membrane of both gram positive and negative gram. CV+ ions later interacts with negative charged bacterial components and made the cell stains purple. At stage 2, iodine is used to increase affinity of cell wall for a stain by binding to the crystal violet and formed crystal violet iodine insoluble complex which get trapped in cell wall caused all cells turned purple at this stage. Stage 3 is the crucial part of the experiment. As this stage differentiate bacteria cell into positive and negative grams by using grams differentiator. This solvent dissolve the outer lipid outer membrane of gram negative cell, leaving peptidoglycan exposed and increase porosity of cell wall. 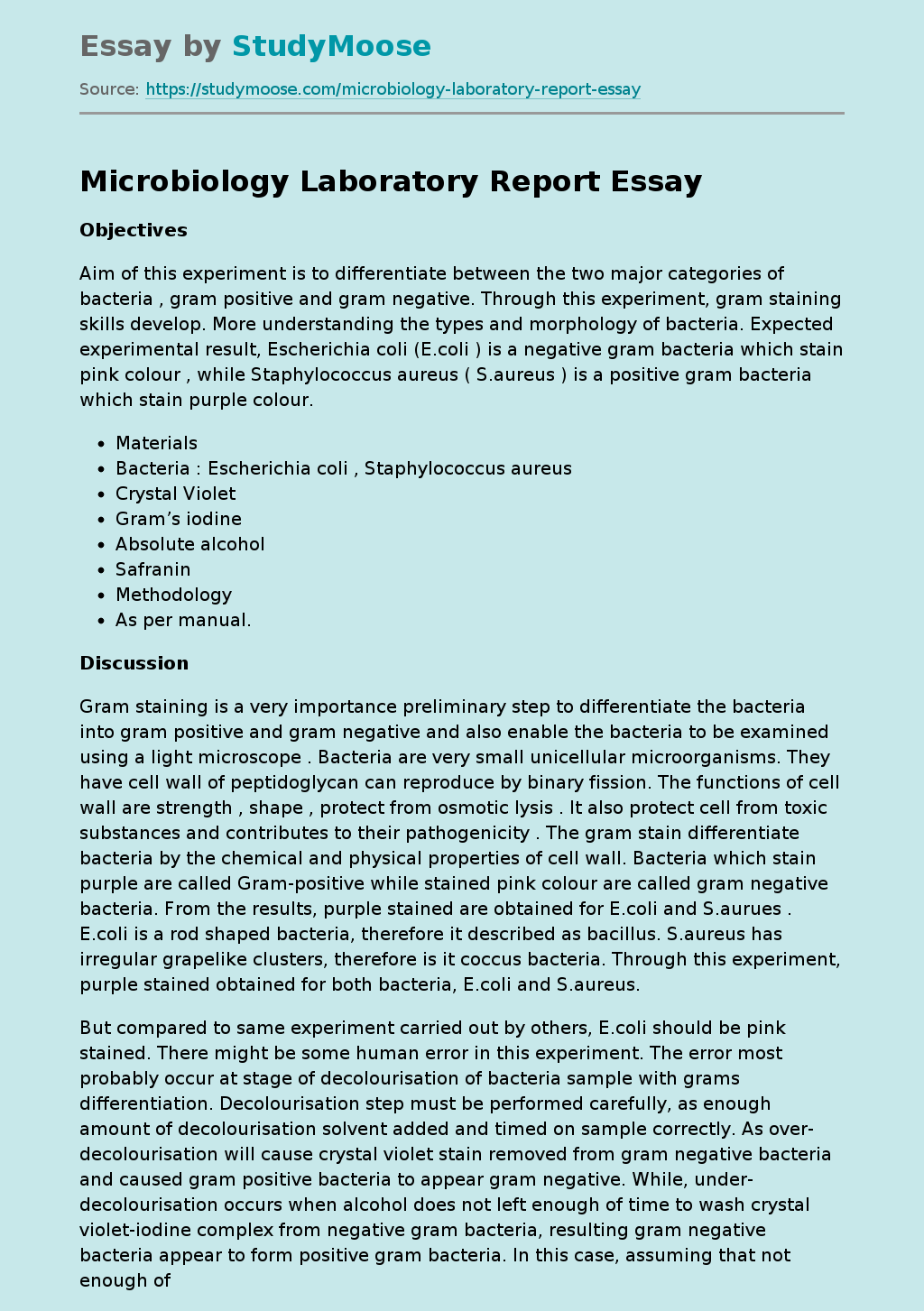