Despite being very different countries, Africa and Australia share a phenomenon termed medical pluralism. This form of health care is indeed pluralistic as it “consists of the totality of medical subsystems that coexist in a cooperative or competitive relationship with one another” (Baer 2004, p. 109). Although medical pluralism is not recent by any means, it is still used differently in various cultures around the globe. This essay will first describe the array of healthcare strategies that form different cultures’ pluralistic health care systems and how these cultures choose which path to take.

Don't use plagiarized sources.
Get Your Custom Essay on Medical Pluralism Just from $13,9/Page

As well, both the advantages and disadvantages to this approach will be explored through select case studies. Finally, a glimpse of issues regarding the future of medical pluralism in Australia will be looked at. According to both Baer (2004) and Quinlain (2011), anthropologists divide treatment options into three categories: the professional sector, the popular sector, and the folk sector. The professional sector, or rather biomedicine or even western medicine, includes those that obtain formal training.

This form of treatment was established in the 1900’s based on scientific reasoning with an emphasis on pathogens.

Even though biomedicine has become more dominant over the other categories in industrialized societies with large bureaucracies and legal systems (Quinlain 2011, p. 394), popular medicine, or natural medicine has been around for the past 10,000 years (Schwager 2012). Approximately 70-90% of health care takes place in popular medicine, making it the most commonly used (Quinlain 2011, p. 394). This broad range of treatment can take on the form of special diets, over the counter drugs, herbs and other home remedies.

Popular medicine is different than that of the folk sector, which includes those individuals that obtain talents, information passed down from ancestors and special training. Baer (2004) asserts that the different medical systems are placed into a hierarchy based on class, caste, racial, ethnic, regional, religious, and gender distinctions, where biomedicine is the most prestigious and folk medicine is the least. However, in some cultures around the world, the treatment option can be based on convenience, accessibility, religious views, and knowledge of home remedies.

In the case of a man named Shosi in Kenya, as explained by Beckerleg (1994), a number of therapy choices were available, but the Islamic movement and economic change created restrictions. Locals were lead to reject treatments of those who offer sorcery. Shosi instead exhausted medical pluralism until he found a treatment that worked for his severe fever. He first started with home remedies, then moved to poorly understood drugs of western medicine but only found relief through a local Halali Sunna leader that practiced a form of folk medicine using plant materials.

Fortunately for Shosi, he had different medical treatment options available to him. Since biomedicine is practiced more in western society, those in places like Kenya and Africa do not always understand the scientific background of it. This has a negative consequence on medical pluralism as two treatment options can contradict each other. A situation in Cameroon, Africa reflected this scenario. Medical doctors informed patients that their diabetes was a life sentence, but patients had false hope when the indigenous healers assured their diabetes could be cured.

Awah and Phillimore (2008) described a situation in Cameroon of a patient with previously diagnosed diabetes that sought treatment at a local clinic for what she thought was typhoid. She told the doctor her diabetes was already treated and cured so she stopped taking the prescribed medication. There was a mutual frustration since “she believed the doctor was ignoring her real health problems, while he could not get her to accept that her symptoms were a consequence of her poorly managed diabetes” (Awah and Phillimore 2008, p. 485).

Thus, this approach of medical pluralism led to a conflict with different medicines. Another example of a repercussion from using medical pluralism was seen in Tanzania. Kamat (2009, p. 54) wrote a case study describing how a woman named Fatumas took her daughter to see the local Zaramo healer. She informed the doctor that her daughter has been crying constantly throughout the night and waking up convulsing for which he prescribed medicine for. However, she failed to tell him that she was giving her daughter over the counter drugs for a fever.

With her misunderstanding, these two symptoms were actually signs of the same illness, which required a single treatment, rather than the two different ones. Kamat (2009, p. 55) described, “In her pragmatic quest for therapy, Fatuma had routinely combined elements from diverse and even contradictory medical traditions. Fatuma thought she was dealing with two different illnesses”. Although there were these few cases where medical pluralism did not work to one’s advantage, there are cases where using different medical treatments is advantageous such as the previously described situation of Shosi and also in Papua New Guinea.

Here, medical treatment is at a lower cost than the local traditional healers since it receives funds from the government (Macintyre et al. 2005). Many locals first visit the local clinic, but in some cases need to resort to the local healers. The healer called Motkel successfully provides treatment in her village by using traditional herbal medications alongside biomedical treatment. Motkel works with cranial trepanation, a standard form of treatment in Papua New Guinea. She also believes that by alleviating symptoms and healing patients her work is analogous to medical doctors.

This form of pluralism seems to work for the locals, even though it may not in other areas of the world. As previously stated, many people rely on natural medicine. That being said, natural medicine is a large part of the medical industry as 57% of the 150 drugs on the market contain at least one plant product (Schwager 2012). However, at the time Schwager’s article was published, a group of Australian doctors and scientists were fighting to remove alternative medicine degrees from the local universities.

They declared that, “alternative medicines are making Australia look bad and trashing the universities reputation” (Schwager 2012). However, this could just be the next attempt to persuade the public in to choosing biomedicine over natural medicine. Natural medicine still fights to prove it is not “quackery” despite being the most popular treatment in the world. Medical treatments vary around the globe, but are still shaped around the three categories of professional, folk and popular medicine that when used in conjunction, create what is termed medical pluralism.

This broad term helps us understand health care systems and health care seeking behaviours within specific cultural contexts. The process of seeking medical treatment depends on the availability, convenience, and religious views amongst other factors in each culture. In some cultures this approach of medical pluralism works to one’s advantage, but in others, can have various consequences as seen through each example provided in this essay. Biomedicine shows dominance over popular medicine and continues to test the ladder that is still widely practiced. Popular medicine, however, still stays part of the pluralistic setting. 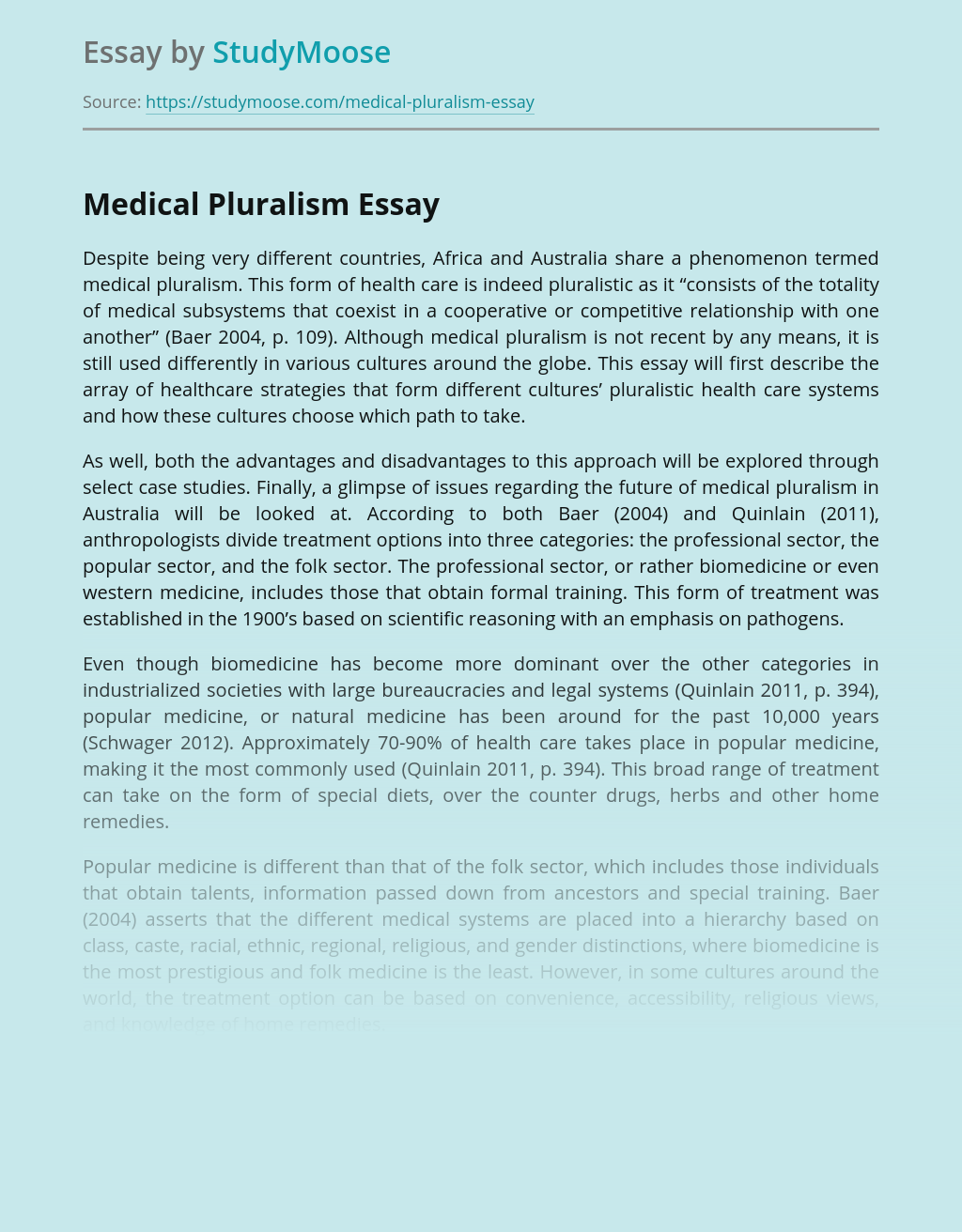 The widespread use of technology has led to some important user health concerns. Some of the more common physical health risks are repetitive strain injuries, computer vision syndrome, and muscular pain. These injuries are on the rise of technology. A repetitive strain injury (RSI) is an injury or disorder of the muscles, nerves, tendons, ligaments,...

In all aspects, the background of any medical practitioner determines the overall attitude, aptitudes and performance of the practitioner. This paper seeks to identify this correlation with due reference to Culture Care Guide to Heritage Assessment by Spector (2009). The guide ardently utilizes the tools inherent in the guide in developing basic nursing principles within...

Promote And Implement Health And Safety

How can community health nurses apply the strategies of cultural competence to their practice? A nurse can be a part of helping a patient’s cultural preservation in their practice. For example, some people in the Jamaican culture hold nine-day wakes for deceased persons. The wake is a time for respecting and honoring the departed soul....