Medical Marijuana and the Legalization Debate

Medical marijuana or medical cannabis can be defined as the use of marijuana for medical purposes. Marijuana itself is a drug that comes from the cut and dried leaves of hemp plant also referred to as cannabis sativa. Its most active ingredient is delta tetrahydrocannibinol. Throughout history marijuana has been used in many different cultures to change perception, mood and consciousness. Its effects range from provoking mystical experiences to the increment of creativity. It comes second from alcohol in the list of recreational drugs.

Don't use plagiarized sources. Get your custom essay on
“ Medical Marijuana and the Legalization Debate ”
Get custom paper
NEW! smart matching with writer

Around the globe, it has been used for many purposes. For example in the primitive tribes of South America India and Africa it is used for religious and ceremonies and also for some medical purposes. For instance the African mine workers used it in easing the drudgery of their work while the Jamaicans used it in the evenings to ease or relieved their fatigue. The ancient Persians, Greeks, East Indians, Assyrians and Romans used marijuana as the drug for controlling reducing muscles spasms, treating indigestion and the reduction of pain (Roth Rebecca 1).

There are two sides on the issue of legalization of marijuana and each side has a multitude of reasons as to why medical marijuana should be legalized. This leaves one unsure of which side is credible.

Reasons as to why medical marijuana should not be legalized.

For example in the united states of America the Controlled Substances Act of 1970 classified marijuana as a schedule 1 drug on basis that it contained high potential for abuse. This was propelled by the perception that people who consume it usually get hooked up therefore becoming potheads and the drug eventually dominates their lives. They also believe that the frequent overuse of the drug can lead to lethargic behaviors or even serious health problems. Addiction is brought by the fact that there is a possibility that someone treated for chronic periods of time for a constant pain will eventually become more dependent on the drug. He will also require high amounts than before. This addiction may lead to death due to respiratory failure.

Another reason as to why some people are against the legalization of the medical marijuana is because they hold the idea that it has no accepted medical use. For example marijuana may yield considerable medical benefits for many patients with ailments such as cancer and glaucoma but these benefits have not been universally accepted both nationally and internationally. Another reason as to why many people are opposing this initiative is that it is historically linked to narcotics such as cocaine and heroine. For example in America the early anti-drug laws were stipulated so that they may regulate narcotics which included opium and its derivatives such morphine and heroine. These anti-drug laws also regulated marijuana although it is not a narcotic. The other reason is that some people believe that marijuana as a drug is associated with unfashionable styles. This is because often many people have taken marijuana to be the drug for losers and hippies. They feel that its legalization will lead to increased number of losers and hippies and therefore imposing of criminal sanctions against people who are found to be in possession of marijuana is perceived to a form of communal protection “or tough love.”

Some people who are opposing the legalization of medical marijuana feel that there is no enough evidence to show that the drugs cure disease. In some countries (Holland and Amsterdam) where medical marijuana is considered to be illegal, it is assumed that marijuana can not be used for medical purposes because of some harmful effect brought about by its use. For example it is assumed that it affects the skills required for one to drive safely because it lowers alertness or the ability to concentrate, ability to react quickly and personal coordination. It also affects the driving skills by making it difficult for one to react to signals, sounds on the road and judge distances. Other harmful consequence of marinol drug which is made from marijuana include premature cancer, mental disorders such as depression, increased aggressiveness and hostility, memory loss, general apathy impairment of the immune system and the reproductive disabilities. For example scientific studies indicate that marijuana weakens the immune system of people suffering from AIDS for it is estimated that marijuana smokers who are HIV positive progress to the full blown aids twice as fast as the non-smokers.

Opposers of legalization of the medical marijuana also believe that legalizing of the drug will lead to increased access to marijuana for the young population who are most likely to be damaged by the drug use. They also argue that there are many other drugs which can be used in the treatment of the same diseases. Therefore, the use of marijuana for medical purposes is uncalled for. The opposers continue to assert that it is harmful because it is an unstable mixture made up of more those 425 chemicals which usually convert to thousands especially when it is being smoked (Marijuana.com 1)

Reasons as to why medical marijuana should be legalized.

A raging debate has ensued about the legalization of the marijuana medicine. The proponents of the legalization of marijuana believe that marijuana should be moved to a schedule II drug so that it can be useful to a point that it can be prescribed by a doctor. They also believe that it doesn’t cause some health problems like those caused by alcohol or tobacco such as strong addiction, cancer, heart problems, birth defects liver damage and emphysema. They also believe that death from an overdose is impossible. A study carried out by the UCLA school of medicine which featured 243 marijuana smokers over 8 years of smoking has shown that neither the intermitted nor the continuing marijuana smokers showed any declining rates in the lung function compared to the people who have never smoked marijuana (Barry 1).

Many proponents also believe that many people are arrested and charged when they take marijuana for treatment since many people would rather face the law that die of certain diseases which can be remedied by marijuana. They also assert that scientific and medical tests dating back to thousand of years point to the medical properties of cannabis. They also state that thousands of doctors, patients and their families have also have also witnessed the medical benefits of marijuana because they have told other through testimonies in public hearing and also in the mass media. They have also contributed to books and even research studies on the drug. The proponents claim that the phenomenon (use of marijuana for medical purposes) is real and those who say the evidence is not sufficient are missing the point. They also argue that the evidence is enough for one to declare that there is no any valuable reason as to why medical patients who use marijuana for legitimate medical reason should be subjected to arrest, jails, public embarrassment and fines. They argue that the decisions about the use or purposes of marijuana lie in the hand s of doctors and patients.

Some countries or states have legalized and others are pushing for the legalization of medical marijuana because of its positive attributes which include the medical value and its use as a recreational drug accompanied by relatively mild side effects. Many people believe that it’s a good treatment of some ailments. For example it provide the relief in pain, spasticity, nausea and many other symptoms which have not been successfully been treated with conventional medications. This is evident from the State of California whereby the smoking of marijuana has effectively been used in the relieving of chronic HIV associated nerve pains which were characterized by aching, burning and painful numbness. The patients were advised to smoke marijuana at least three times a day so that they can do away with the pain. People say it helps cancer patients because they believe it can stimulate appetite therefore alleviating the vomiting and nausea associated with the chemotherapy procedures (Sanfranciscocannabisclubs.com 1).

It is also argued that marijuana offers a mild and moderate way of relaxing unlike alcohol which has some of the vices associated with it such as frequent urination, nausea and at times vomiting especially when the individual had not taken some food before drinking taking it. After personal observations done by many people it is said that marijuana can be a good choice of drug because it has relatively low dependence liability and it is a little bit easier to control its side effects compared to the other drugs. It is believed that most of the marijuana users mainly develop tolerance to the drug’s side effects and those who do not then stop using the drug with an immediate effect (Alternet.org 1).

Conclusively, legalization of marijuana is a hotly contested debate between the opposers and proposers. Each side has got a multitude of reasons to support its respective stand and this creates an evenly balanced debate. Some of the medical reasons cited by one side are a counter to the reasons put forward by the other side. This creates a quagmire regarding the whole issue as one is unsure of which side is more credible.

Roth, Rebecca. Medical Marijuana, 2008. Retrieved from http://serendip.brynmawr.edu/exchange/node/1901 This source talks about the history of marijuana a and how it was used the past or its main uses.

Alternet.org. The Top Ten Reasons Marijuana Should Be Legal, 2007. Retrieved from http://www.alternet.org/drugs/60959/ The article gives some of the reasons as to why there should be the legalization of the medical marijuana

Marijuana.com. Marijuana should not be legal because, 2000. Retrieved from http://www.marijuana.com/legalization-decriminalization/1004-marijuana-should-not-legal-because.html The article gives some of the reasons as to why some people do not support the legalization of medical marijuana

Barry, Ian. Legalize marijuana, 2009. Retrieved from http://blog.sanonofre.com/2009/06/ian-barry-teen-pot-essay.html The article gives some of the examples of the fact that marijuana is not harmful and also explains why medical marijuana should be legalized.

Medical Marijuana and the Legalization Debate. (2019, Aug 19). Retrieved from http://studymoose.com/medical-marijuana-and-the-legalization-debate-essay 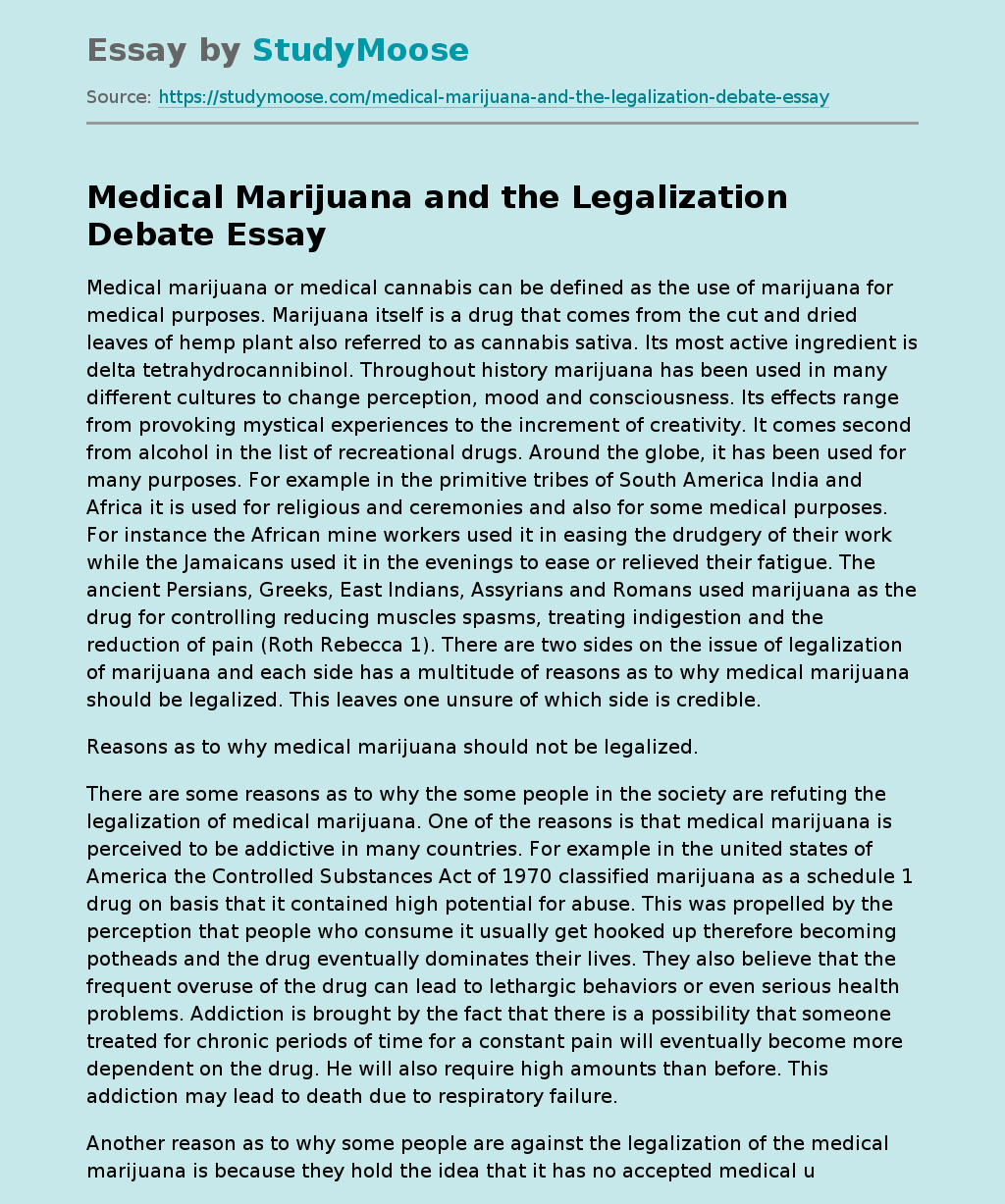