Masculinity: Slavery in the United States

Things Fall Apart was written in the 1890s, when whites went to Nigeria. The novel shows the clash between the white’s and the culture of the Igbo people. The novel is about a man named Okonkwo, and his growth for respect, fortune and power which in the end leads to his expected death. His great power did not come to an end because of colonization, but rather his downfall was his obsession with masculinity. The narrative of Frederick Douglass also defines masculinity.

Don't use plagiarized sources. Get your custom essay on
“ Masculinity: Slavery in the United States ”
Get custom paper
NEW! smart matching with writer

The narrative of Frederick Douglass took place in America.

During slavery, Frederick Douglass was limited to plantation work because blacks were not seen as being capable to achieve more in life but that did not stop him. Even though both men came from two different backgrounds, they both had a way of portraying their masculinity. There are many things in life that can either make us successful or leads us to failure. In things Fall Apart, Okonkwo’s feared he will become a failure like his father.

He struggled to be as different from his deceased father as possible.

He believes his father to have been “weak, effeminate, lazy, ignominious, and poor. Consequently, Okonkwo strives to be strong, masculine, industrious, respected, and wealthy” (pg 4). This drove him to recklessness, and added to his death. He began to let the thought of fear of failure and of weakness to control his life through the novel (pg 13). Okonkwo believed felling an emotion or showing one was a sign of weakness.

He said, “’When did you become a shivering old woman, Okonkwo asked himself, you, who are known in all the nine villages for your valor in war?

How can a man who has killed five men in battle fall to pieces because he has added a boy to their number? Okonkwo, you have become a woman indeed” (pg 65). He began to talk to himself so much about how weak he was becoming. It got to the point where he believed showing an emotion was a sign of weakness. In chapter twenty, Okonkwo had a conversation with Obierika and he felt as though whites have taken over their tradition and culture but Obierika explained to him that the whites did nothing to his people. His people betrayed their own.

He says, “Obierika points out the impossibility of the colonialists understanding anything about the Umuofians without speaking their language. He points out the ludicrousness of denigrating unfamiliar customs. Yet, Obierika does not lay the blame wholly on the side of the white man. He feels also that the Umuofians who have converted to Christianity have consciously and wrongly turned their backs on their own “brothers” (pg 174-175). Another one of Okonkwo’s weaknesses was portrayed through the way he defined masculinity so narrowly.

Even though Okonkwo was a part of a male-controlled society and the male gender was already established with great authority he still felt like he had to control everything as a man should do. He was scared to adapt to this change because he felt this will make him less of a man. He says, “The white man is very clever. He came quietly and peaceably with his religion. We were amused at his foolishness and allowed him to stay. Now he has won our brothers, and our clan can no longer act like one. He has put a knife on the things that held us together and we have fallen apart” (pg 176).

He was not able to adapt to the clashing values of both societies and the changing ways around him. He could not accept the fact that in a colonized society he would be an average person, rather than a distinguished and powerful male. By adapting to his own idea of masculinity he rejected everything that his father stood for; cowardice, gentleness, and laziness. Okonkwo stood for bravery, courage, hard work, and at many times, felt violence was the only answer to his solution. Okonkwo lived in a patriarchal society where males dominated, and he took advantage of this authority.

He associated masculinity with aggression and felt that anger was the only emotion that he should display. Frederick Douglass was a man who stood for what he believed without letting fear taking control of him. Likewise, Frederick Douglas was born in February 1818. “At the age of ten or eleven, Douglass is sent to live in Baltimore with Hugh and Sophia Auld. Douglass overhears a conversation between them and comes to understand that whites maintain power over black slaves by keeping them uneducated. Douglass resolves to educate himself and escape from slavery.

Douglass struggles to free himself, mentally and physically, from slavery”. During this time, African Americans were very limited to do anything. All he wanted was freedom from slavery so he can feel like a man. Douglas was an abolitionist who was dedicated to learn. He was motivated to teach himself how to read and write because he did not want to be a slave for the rest of his life. Frederick Douglass was driven to succeed. Frederick Douglass was a slave at one point but gained his freedom through his education. He says, “What he most dreaded, that I most desired” (Douglass pg 19).

He claims, “When I was sent of errands, I always took my book with me, and by going one part of my errand quickly, I found time to get a lesson before my return” (Douglass pg 22). With Douglass ambition, he was ready to get his freedom without thinking about the consequences because he knew his hard work will pay off one day. Frederick Douglass is the definition of a man and a leader because he was honest, straightforward, inspiring, and competent. Many great men have come and gone but Frederick Douglass will always have a great influence on many generations because of his drive to get his freedom and education.

Education is something one needs. It will be hard for many to function through life without an education and he showed anyone can do it if they put their mind to it. There were many differences between Okonkwo and Frederick Douglass but both men had a purpose in life as men and I believed they both accomplished what they were looking for even though ones went better than the other. Okonkwo’s demise was not because of colonization, but rather his downfall was attributed by his obsession with masculinity. The narrative of Frederick Douglass was the definition of masculinity.

Masculinity: Slavery in the United States. (2016, Sep 15). Retrieved from http://studymoose.com/masculinity-slavery-in-the-united-states-essay 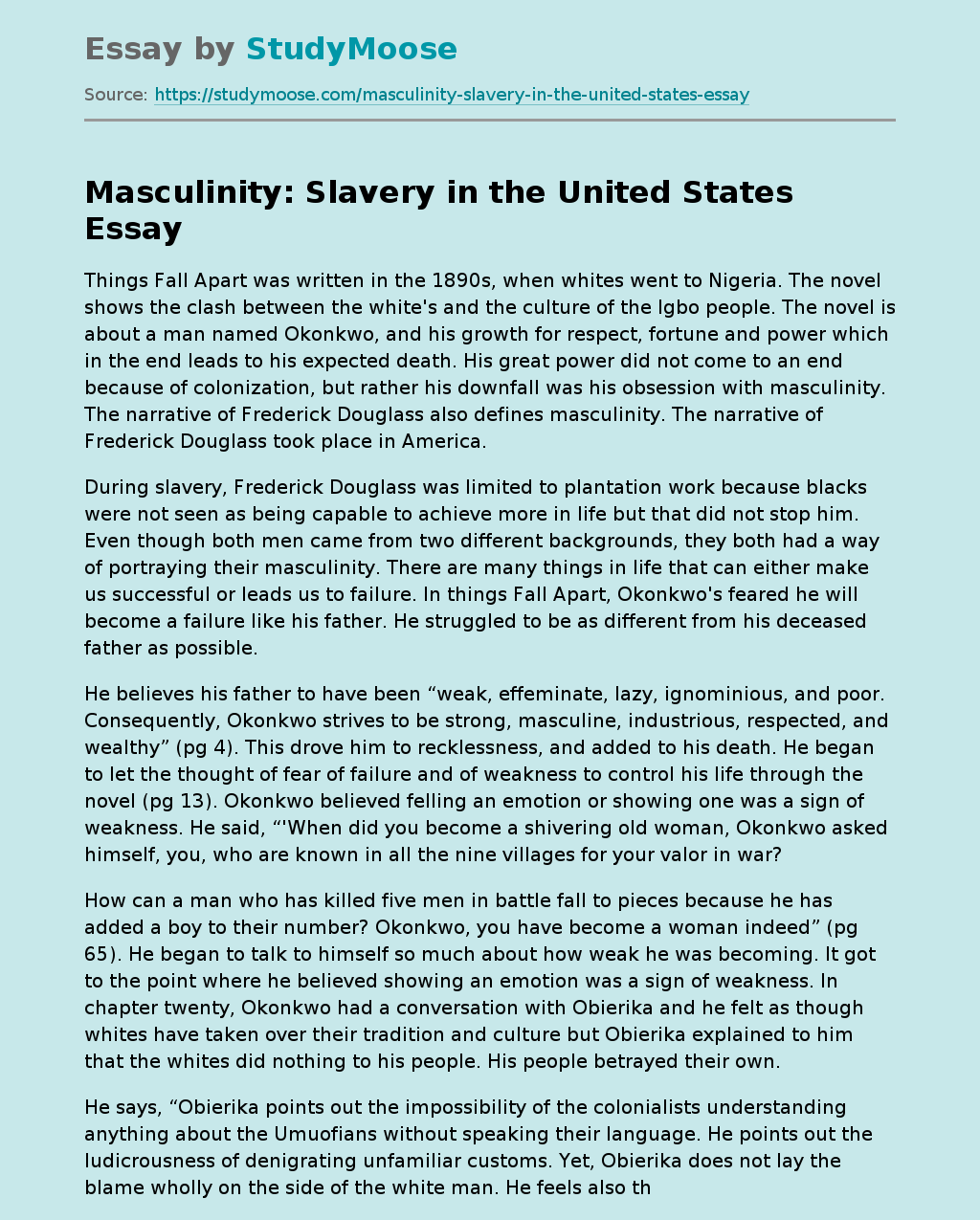