The ‘obvious reasons’ women, children, non-citizens, and slaves were excluded from the right to vote is because, in the society, men were superior and above all other races or genders. Men were thought to be the only ones capable of representing the county. Society believed men should be the ones who make the major decisions, such as who to vote for. Slaves were often men, but because of their color they were views as less than men.

They relate to the American Revolution by saying, ‘It is for you to decide whether it shall be confined to the European complexion in future.

Don't use plagiarized sources. Get your custom essay on
“ Slavery and Colonial United States ”
Get custom paper
NEW! smart matching with writer

’ This quote puts pressure on the citizens to do as they claim is best, or it will be like Britain.

The first insert claims that everyone in society should have equal rights and be free. They say people deserve the right to be free and hold rights in the country. They claim everyone should be equal to a white man and hold the same freedoms.

Latin America adopted a constitution which allowed voting among Indians and free blacks. Adams feared Spain would try to regain control of its Latin colonies.

The Monroe Doctrine stated the United States would oppose any further efforts at colonization by European powers in the Americas, would abstain from involvement in the wars of Europe, and finally, the doctrine warned European powers not to interfere with the newly independent states of Latin America. United America shows its presence after they get independence and the expansion of territories.

The American System plan rested on 3 pillars: A National Bank, A tariff on imported manufactured goods to protect the American Industry, and federal financing of improved roads and canals. These improvements protected the economy by enforcing a high tariff to protect American industries and generated revenue for the federal government.

In the Missouri Compromise the north and south disagreed over James Tallmadge’s proposal to eliminate more slaves coming into Missouri. Most northerners agreed to this proposal and most of the south was against it. This dispute led to the Missouri Compromise. In the nullification crisis the tariff of 1828, created by Jackson, was a tax on raw materials.

The north benefitted from this tariff; unlike the north, the south was harmed. This led to South Carolina’s legislature threatening to nullify it.

Calhoun insisted the national government had been created by an agreement among sovereign states, each of which retained the right to prevent the enforcement within its borders of acts of Congress that exceeded the powers spelled out in the Constitution.

The nullification crisis centered around southern protests the tariffs placed on all foreign goods. The tariff was meant to boost sales of US products and protect manufacturers in the north from cheap British goods. The south saw the tariffs as severely damaging to their economy due to the need of goods from foreign countries to farm.

People like Jackson and Marshall referred to the Indians as if they were wild and didn’t belong in society.

John Marshall claimed that from the early colonial area, Indians had lived as nomads and hunters, not farmers. However, Jefferson and others believed that Indians who developed American ways can be part of society. Indians made great efforts to become ‘republican Americans’. The Marshall court broke boundaries the President had set in place with the Cherokee. Many of the Cherokee resisted.

Slavery and Colonial United States. (2020, May 22). Retrieved from https://studymoose.com/slavery-and-colonial-united-states-essay 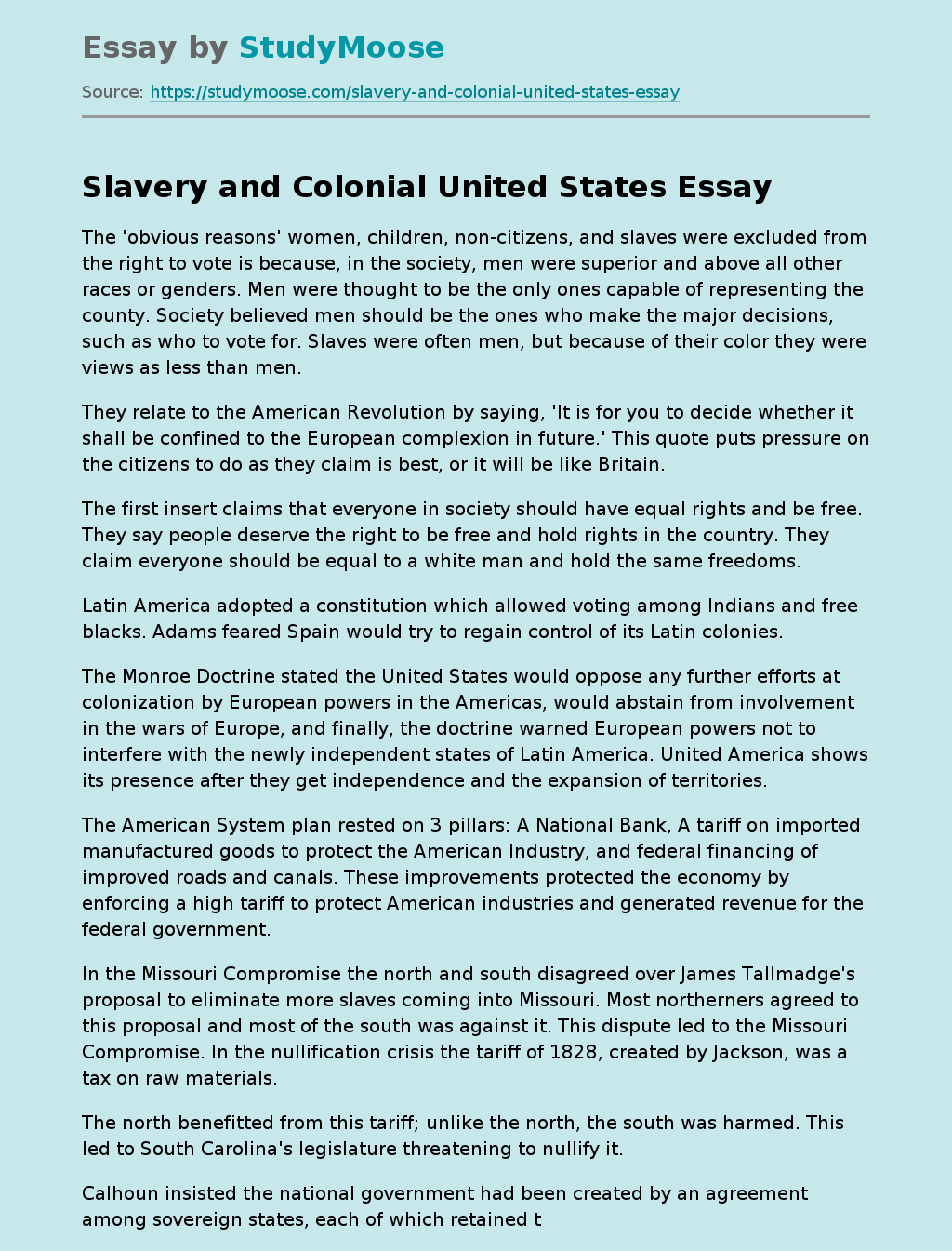