How is Marxism presented as a metaphor in Christina Rossetti’s poem ‘Goblin Market’?

In Goblin Market, Rossetti presents Marxism as a metaphor through a number of different characters and through the language used. It could be argued that in the poem there is this idea that consumerism is bad, and that we are never satisfied with what we have which is essentially the theory behind Marxist views. An example of this in the poem is that once Laura has had a taste of the fruit she immediately wants more.

Turn in your highest-quality paper
Get a qualified writer to help you with
“ Marxism in “Goblin Market” by Christina Rossetti ”
Get high-quality paper
NEW! AI matching with writer

This is shown in Laura “in an absent dream…longing for the night”. Laura is just wasting away waiting for the night to come so she can hear the goblins cry yet again. The use of the word ‘longing’ could be used as a metaphor for the desire and addiction involved in consumer consumption in the economy as a whole.

Another way by which Rossetti presents Marxism through metaphor is through the goblins.

The goblins could represent business men and therefore be a metaphor for the greed and gluttony in capitalistic society, who tricks people into buying their products. For example when it says “brother to sly brother” it is as if the goblins have spotted a vulnerable customer who they know they can persuade to buy their produce. Rossetti’s use of the word ‘sly’ infers that the goblins are devious and deceitful in their transaction of the goods, which suggests the greed associated with capitalism through a Marxist opinion.

It could therefore be argued that, even though money is the central medium for business, in ‘Goblin Market’ the real value is in the greed and the experience. The golden lock of hair given to the goblins could represent this method of trade however.

The “Goblin men” Are a metaphor for capitalism, and the exploitation of women by these capitalists. The Goblin men want her to buy their fruit, which could be seen as a metaphor for consumerism. On the other hand, it could also be suggested that this metaphor is for the capitalist system as a whole. To get this fruit Laura has to sell her body, and purity, represented by the hair that she sells to the goblin men. Look at this passage in particular.

With the help of Marxist criticism we can make the argument that Rossetti was influenced by her contemporary society. As mentioned earlier, every society must – according to Marxism – pass through three stages in order to develop. The third stage of society’s development, the bourgeois society, is a society where all means of production is controlled by one class in society and can therefore be interpreted as the Victorian society and its relationship with the British colonies during this time. The goblins in this poem could therefore be said to represent the controlling force in the economy.

The study of the fruits that the goblin men sell through a Marxist perspective is a very important part of the analysis of ‘Goblin Market’. When considering the items offered to the two girls, certain properties of the fruits are particularly interesting. The fruits are described by the author as tempting, sweet-tasting and luscious-looking. They are also exotic and not the kind of fruits which are grown in the typical British climate and nature which presents them as very idealistic. These idyllic fruits could therefore be argued to be a metaphor for the appeal of the capitalist regime and the presentation of propaganda through consumer products – which draws a parallel to the way in which the fruits are presented as “sweeter than honey” and “clearer than water” which both have connotations of natural purity and fairness.

By using these exotic fruits as the bait with which to trap the innocent girls, the reader gets the feeling that the goblin men have travelled around the world in order to collect and sell the fruit. The selling and consuming of this fruit can therefore be interpreted as the conquering and exploitation of the British colonies all over the world.

The structure of ‘Goblin Market’ could be seen to represent Marxism through the use of enjambment and the visual appearance of the poem, due to it being an evenly laid out piece of writing. This is because Marxism was the basis for communism which tends towards fairness and even structure in society which is reflected in the structure of the poem. For example, the lengths of the stanzas are all similar. On the other hand, another interpretation of the structure could be that it lends itself to a reading of “Goblin Market” as a Christian allegory of temptation, fall, and redemption, and some critics have contended that this is the main purpose of the tale.

In conclusion, the Marxist viewpoint in Christina Rossetti’s poem ‘Goblin Market’ is presented through metaphor. These metaphors take various shapes in the characters and the structure of the poem, as well as the use of language to insinuate the corruption involved in a capitalist societal structure. 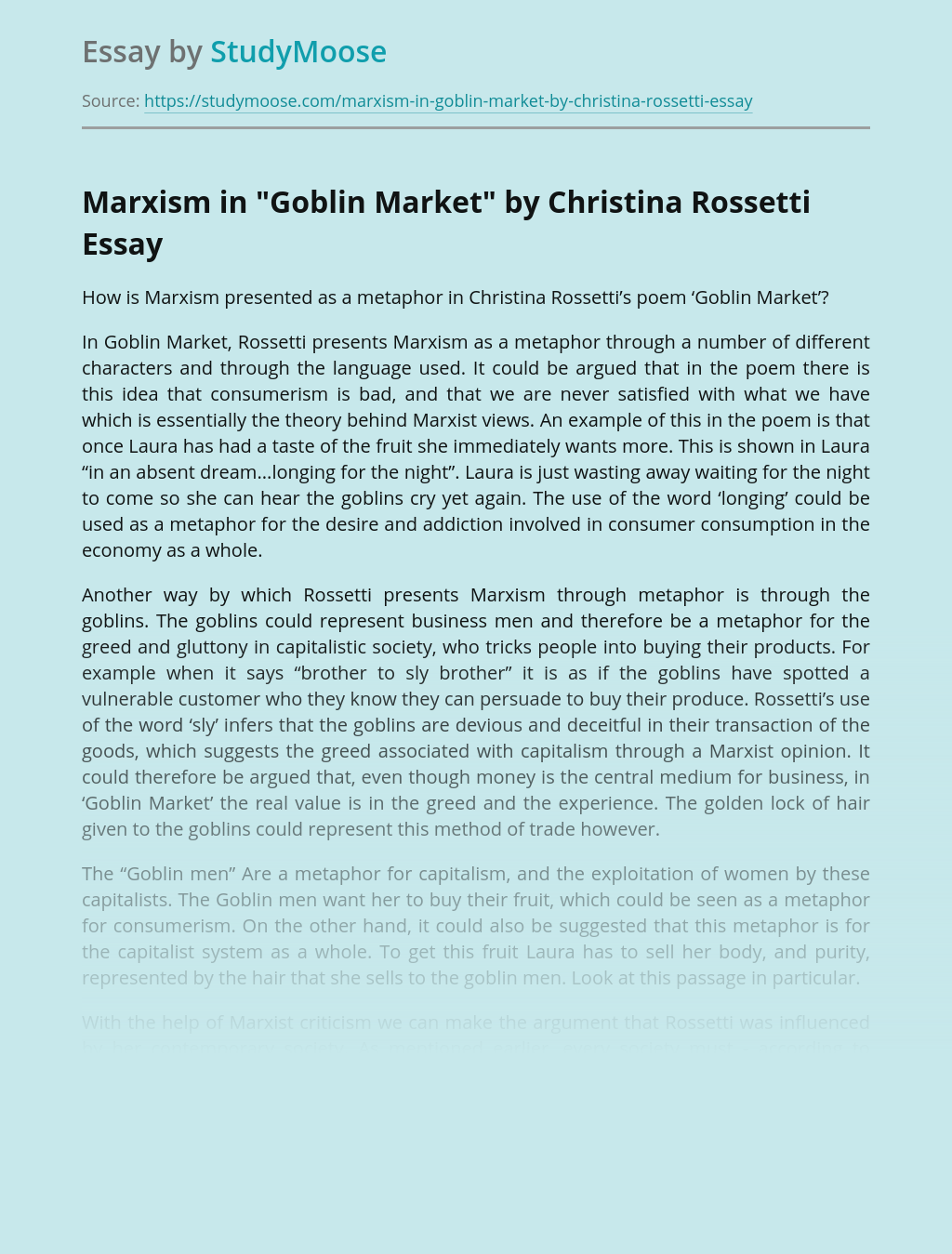 Turn in your highest-quality paper
Get a qualified writer to help you with
“ Marxism in “Goblin Market” by Christina Rossetti ”
Get high-quality paper
Helping students since 2015
Stay Safe, Stay Original