Marbury v. Madison was a very influential Supreme Court case in the history of the United States. Marbury v. Madison was a United States Supreme Court case in which the Court formed the basis for the exercise of judicial review. This happened under Article III in the Constitution. The court case helped to make a boundary between the executive and judicial branches of the American form of government. In the final days of his presidency, John Adams appointed a large number of justices of peace for the District of Columbia whose commissions were approved by the Senate, signed by the president, and had the official seal of the government on them.

Don't use plagiarized sources. Get your custom essay on
“ Marbury v. Madison ”
Get custom paper
NEW! smart matching with writer

William Marbury, who was the Justice of Peace, asked the Supreme Court to force James Madison, Secretary of State, to deliver the commissions.

The commissions were not delivered, however, and when President Jefferson assumed office, March 5, 1801, he ordered Madison not to deliver them. Marbury then asked the Supreme Court for a writ of mandamus forcing Madison to show reason not to receive his commission.

It was through three questions asked by John Marshall that the case was resolved. First, did Marbury have a right to the writ for which he petitioned? Second, if he has a right and that right was violated, do the laws of the United States allow the courts to grant Marbury such a writ? And third, if they did, is it right to ask the Supreme Court to issue such a writ? (Nichols 1). The biggest Constitutional issue with Marbury v.

Madison is that it validated Article III of the Constitution which granted the Supreme Court the highest level of judicial power in the United States, and outlined which types of cases were parts of the Court’s appellate jurisdiction, and which were parts of its original jurisdiction (Mountjoy 24).

There were six Justices for the case and these were Samuel Chase, William Cushing, John Marshall, William Paterson, and Bushrod Washington. John Marshall was the justice who wrote the majority opinion and his interpretation of Article III was that, as an independent branch of the federal government, part of the Court’s responsibility was judicial review, which allows the Supreme Court to analyze legislation and get rid of any laws they determined to be unconstitutional (Mountjoy 36).

The majority opinion, delivered by Marshall first explained that Marbury was entitled to his commission since it had been signed by the president, therefore it being withheld by the court was against his legal rights. This goes back to the second question, if he has a right, and that right has been violated then should the US grant Marbury a writ? It is the nation’s responsibility to provide civil liberty and denying Marbury his rights is the opposite of that so it was said that Marbury should be allowed to have a writ of mandamus. Marshall went on to say that it was the particular responsibility of the courts to protect the rights of individuals, even against the president of the United States.

It was in answering the third question, whether the Supreme Court should be allowed to issue the writ, the Marshall addressed judicial review. Marshall ruled that the court could not grant the writ to Marbury because Section 13 of the Judiciary Act of 1789 was unconstitutional. This is because according to Article III, it applied to only cases “affecting ambassadors, other public ministers and consuls” and to cases “in which the state shall be party.” (Brannen 476).

Marshall said that by extending the Court’s original jurisdiction to include cases like Marbury’s, Congress had exceeded its authority. And when an act of Congress is in conflict with the Constitution, it is the obligation of the Court to uphold the Constitution because it is the “supreme law of the land”(van Alstyne 29). In the end, Marbury was denied his commission, which pleased President Thomas Jefferson and Madison.

This case is such a significant case in US history as it established judicial review. By doing this it made the Judicial Branch equal with Congress, or the Legislative Branch, and the Executive Branch. Because of this case there have been many other court cases throughout history where the court has referred to Marbury v. Madison to establish its power.

As a result of Marshall’s decision Marbury was denied his commission — which presumably pleased President Jefferson. Jefferson was not pleased with the lecture given him by the Chief Justice, however, nor with Marshall’s affirmation of the Court’s power to review acts of Congress. For practical strategic reasons, Marshall did not say that the Court was the only interpreter of the Constitution (though he hoped it would be) and he did not say how the Court would enforce its decisions if Congress or the Executive opposed them. But, by his timely assertion of judicial review, the Court began its ascent as an equal branch of government — an equal in power to the Congress and the president. Throughout its long history, when the Court needed to affirm its legitimacy, it has cited Marshall’s opinion in Marbury v. Madison. 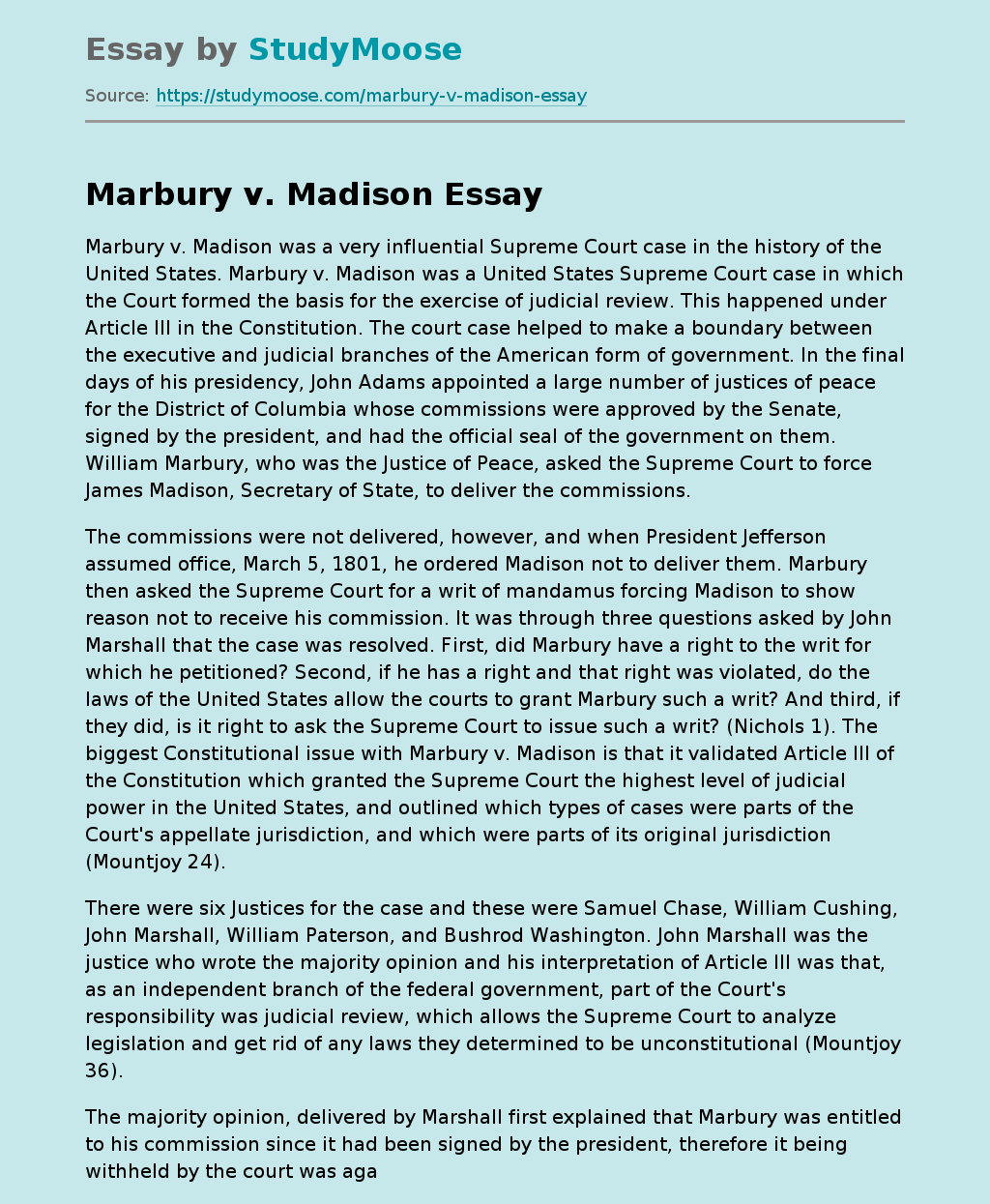