Many films are a bad influence on young people

The film industries of the world are developing day by day. Today there are so many films being produced that you can barely keep count. Some of them are for the benefit of the community but most of the films have a bad influence on the young people as well as on the community. These films are responsible for increase in violence, crime, illegitimacy in the society. And I completely agree with the statement that many films are a bad influence on young people because of the following reasons.

Don't use plagiarized sources.
Get Your Custom Essay on Many films are a bad influence on young people Just from $13,9/Page

It has been noticed that boys and girls are crazy of watching movies. And they spent averagely three to four hours in watching movies daily. This fast growing bad habit is expensive because of increasing electricity bill and the waste of precious time which can certainly be devoted to healthier, less wasteful and more gainful pursuits.

The extreme setting in front of TV is harmful for education and health also. The studies are affected because youth like to watch television when parents are not there in home, and having no self-discipline.

Many teens have shortsighted because of this. And it caused the problem like fat. Staying at home will let you become lazier. Our body needs to do sports, exercise etc

The youth also try the actions done by heroes in the films. In the Indian films there is extreme level of violence, crime and other deviations from normal human behavior. The re-enactment shows shown on different channels of about robbery, murder etc, and are extremely dangerous for the country in future because youth learn about the new methods of criminal activities.

Education and other experts have repeatedly found that the main source of eve teasing and assaults on girls in our towns and cities, in the market place and elsewhere, is the cinema. Young people see on the screen a hero running after a heroine, approaching and tempting her in subtle ways. Such talk and gestures naturally catch the attention of the immature cinema fans and affect their thinking and conduct. Thus, the social fabric and the morals of the young people are adversely affected.

Another notable aspect of the situation is that whenever some enterprising producer presents a simple, true-to-life story, based on the works of famous short story or fiction writers as Prem Chand or Sarat Chandra, such films, and also art films free of glamour, seldom prove successful and prove to be flops at the box office. The modern audiences want songs and dances, spectacle and gorgeous costumes, love scenes and fights. What sort of citizens can the country hope to produce when the films the young see are totally misleading, lack aesthetical values.

However, there are some positive effects of the films like movie “Tara Zameen Par” in which a child which is been weak in one subject can be good in other subject and the strictness of the parents on the weak subject can make the child mentally disabled.

In the last movies and films are bad for the youth because positive effects are lesser than negative effects.

Many films are a bad influence on young people. (2016, Aug 09). Retrieved from https://studymoose.com/many-films-are-a-bad-influence-on-young-people-essay 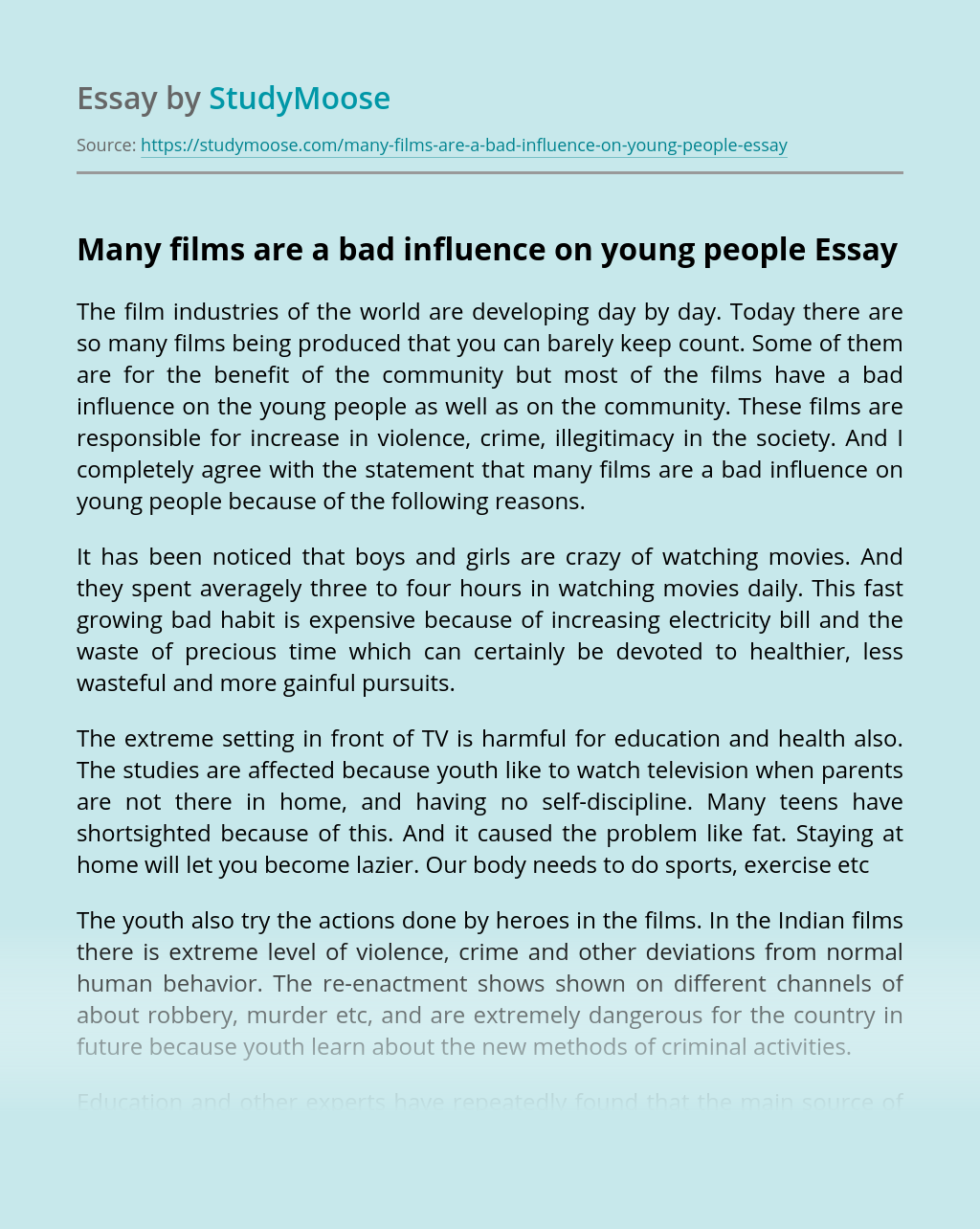 Business of Being Born

There is a culture of “women-only” that runs rampant in spaces for pregnant women. Much of the talk is about how valuable women find the support of other women. It also excludes men from the process and experience of pregnancy, as much as they can experience it. Overall the film focuses on the fact that...

In all types of film, especially with animation, the images that are created on screen visually engage the audience to the world of the film, yet in order to fully experience all that the film has to offer, the visual aspects are only half of the importance. Sound design makes up that other half of...

Get Essay
A Knight's Tale

One important character in the film ‘A knight’s tale’ directed by Brian Helgeland is William Thatcher. William helped me understand the idea of following your dreams. William dreams of one day becoming a knight. He grew up in a place called Cheapside London with his father John Thatcher until he was sent away to work...

Crimson Tide film exhibits a theme of leadership case, is based on nuclear ballistic submarine order aimed to hit against Russia. The attack is aimed to silence threat of launching nuclear missiles which Russia is in possession. The combative action is in a problem since the army structure is loose due to dispute between executive...

The Hunt For Red October

A lot of people have seen the movie The Hunt For Red October , but before it was a film it was a great book that readers all over the world enjoyed a lot. While the story is pretty simple, it is still a great adventure tale of the old Cold War. I enjoyed this...