Malaysia Is A Multiracial Country

Malaysia is a multiracial country with a rich cultural heritage. Here, people strongly believe in respecting each other’s culture and religion. Malaysia is unique because of its diversity of races, religions and cultures, the stability of the country and many places of interests. Besides, there are many international achievements which are the pride of our nation. Diversity of races, religions and cultures is a significant characteristisc of our nation. Languages

There are as many languages spoken in Malaysia as there are people of different ethnic backgrounds.

Don't use plagiarized sources.
Get Your Custom Essay on Malaysia Is A Multiracial Country Just from $13,9/Page

Bahasa Malaysia is the official language, but luckily for expats in Malaysia, English is an active second language which is widely spoken particularly by business people. The official term for the English used by people living in Malaysia is Malaysian Standard English. The use of “Manglish” is a form of colloquial English with Malay, Chinese and Tamil influences often heard on the streets, is being actively discouraged by the government. In total, there are over 130 different languages spoken in Malaysia.

The most common ones – apart from the Bahasa Malaysia and English – are various Chinese dialects as well as Tamil.

Most Malaysians dress as Westerners do but many Muslim women wear long skirts or pants and head scarves. On special occasion, people from each ethnic

group wear their traditional clothes. For Malay women, they wear the baju kurung while Malay men wear the baju melayu with a songkok on their head. Althernatively, the men wear batik shirts with trousers. Indian women wear the sari. The salwar kameez or Punjabi suit is popular with northern Indian ladies. The kurta is the traditional attire for men or formal occasions. For Chinese , the traditional clothes for women is Cheongsam while for the man they wear samfu. Peranakan ladies are also known as Baba Nyonya , they are Chinese immigrants who intermarried Malay partners. They wear the elegant Kebaya that can be described as traditional high fashion.

Malaysia Is A Multiracial Country. (2016, May 29). Retrieved from https://studymoose.com/malaysia-is-a-multiracial-country-essay 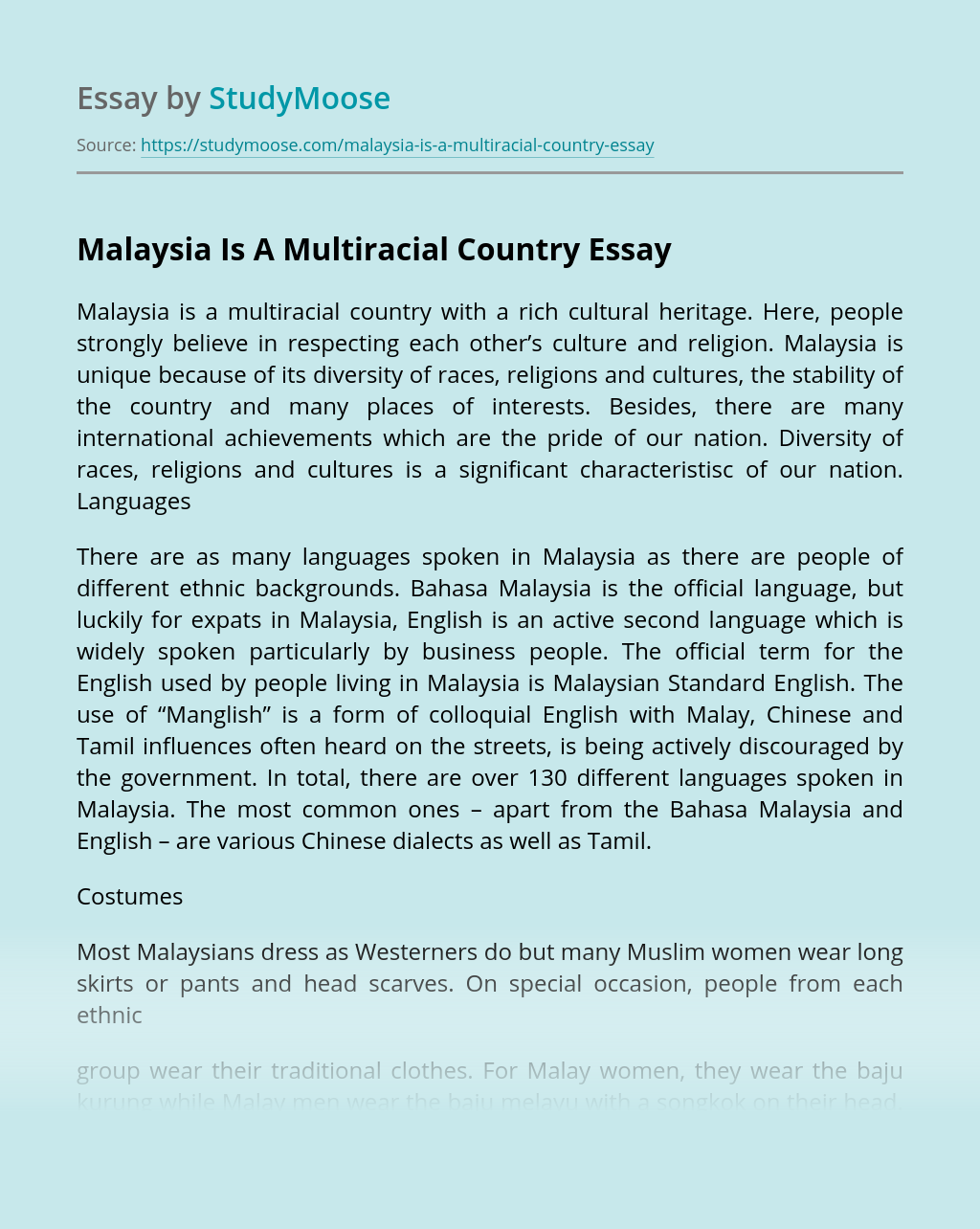 1-INTRODUCTION “To be a great leader, one needs to have good strategies, be knowledgeable and able to predict the future” Mahathir Mohamed After becoming the Prime Minister of Malaysia in 1981, Mahathir Mohammed has changed a lot of polices and economic strategies, which reflected positively on Malaysian economy. In his era, Malaysia has changed from...

Get Essay
City or Town?

Riza, we are planning to move to Kuala Lumpur. ” As soon as my mother said that, my eyes incredibly got bigger and I made a little protest, “What? No! I want to stay here. I love this place. ” “Then, what about your dad’s work? You know your dad is working there,” my mom...