Macbeth by William Shakespeare portrays the major characters of Macbeth and Lady Macbeth. They are both ambitious and are yearning for power. In the beginning of Act One, Shakespeare portrayed Macbeth as a brave and honorable general who received admiration from everyone around him including the king of Scotland, Duncan when he triumphantly defeated the rebel MacDonwald. Macbeth is a good friend and loyal confidant to Duncan. Macbeth is at tragic hero because unlike Shakespeare’s other works Macbeth is not all evil.

Don't use plagiarized sources. Get your custom essay on
“ Macbeth’s Strengths and Weaknesses ”
Get custom paper
NEW! smart matching with writer

He is consumed by his evil ambition and guilt for the throne of Scotland that he will go to any measures necessary to achieve it. Macbeth’s character is very cunning and witty. He is smart enough to understand that Duncan is very kind and naïve and he takes advantage of the fact that he could easily overthrow him. The pressures from his wife Lady Macbeth and the witches make him eager to kill Duncan, but most importantly it is his overwhelming ambition for power that makes him a weak character.

Throughout the first act the character of Macbeth is developed, in which Macbeth’s strengths were ambition, courage, and honor. His use of these strengths and loyalty to King Duncan earned him the title of “Thane of Cawdor.” After the murder of Banquo, however, his large amount of pride and ambition disrupted his morals and faltered his heroic image, leading to the backfiring of the strengths that he once had, which later became his weaknesses.

When Macbeth was visited by the three witches, his superstitious nature was brought out, causing him to trust them and their prediction that he will rise to the throne if he kills Duncan.

He wasn’t satisfied with his position as the Thane of Cawdor. This is one of Macbeth’s weaknesses because he has no sense of self and is controlled and easily convinced to do things that he knows are wrong.

We can see that Macbeth is not all evil and that the person who is behind all this chaos is Lady Macbeth. When it was time to kill Duncan and the plan was set he felt guilty because he understood how good Duncan was to him, however in the back of his mind he had an evil ambition and desire to obtain the throne. When he mentions this to his wife she doesn’t pity him and tells him that he must go on with the plan. “I have no spur to prick the sides of my intent, but only vaulting ambitions, which o’er leap itself and falls on the other.”(Act 1, Scene 7, Lines 25-27) In this quote Macbeth admitted that it was only ambition that motivated him to become disloyal to Duncan. This is one of Macbeth’s biggest weaknesses in which he gives in to his evil temptations, even though he knows that his actions are immoral. He realizes that what he did was wrong and that he did it through illegal actions. It seems as though Lady Macbeth conspired this plan and had no feeling about what bad action she committed.

In general, Lady Macbeth, and well as the witches, were responsible for turning Macbeth’s strong ambitions into his most major flaw. Lady Macbeth contributed to the deterioration of his character by challenging his courage and testing his manhood if he didn’t take the shortest way of obtaining the throne, which was by killing Duncan. When Macbeth tells his wife that he does not want to kill Duncan, she convinces him that he is weaker than a women, manipulating his kind and sensitive nature.

The witches brought out another one of Macbeth’s major weaknesses, his superstitious nature. They suggest to the reader that his superstitious nature will lead to something fatal. After meeting the witches, Macbeth begins to worry, leading to hallucinations that he thinks tell him to murder Duncan, like his vision of the dagger. When Macbeth “sees” the dagger, he states, “Is this a dagger which I see before me, The handle toward my hand? Come, let me clutch thee: I have thee not, and yet I see thee still. Art thou not, fatal vision, sensible To feeling as to sight? Or art thou but A dagger of the mind, a false creation, Proceeding from the heat-oppressed brain?” (Act 2, Scene 1, lines 33-39).

Macbeth’s strengths fail, turning out to be his weaknesses, which makes him a tragic hero because he was once honorable and highly respected; his downfall caused by his own mistakes. After he starts committing murders, his guilty conscience comes out and leads to the deterioration of his character, leaving him unhappy and remorseful. In Macbeth’s case, his negative traits such as his gullibility, lack of control and willpower overcome the strengths and advantages that he once had; his pride, honor, and strong, ambitious nature. 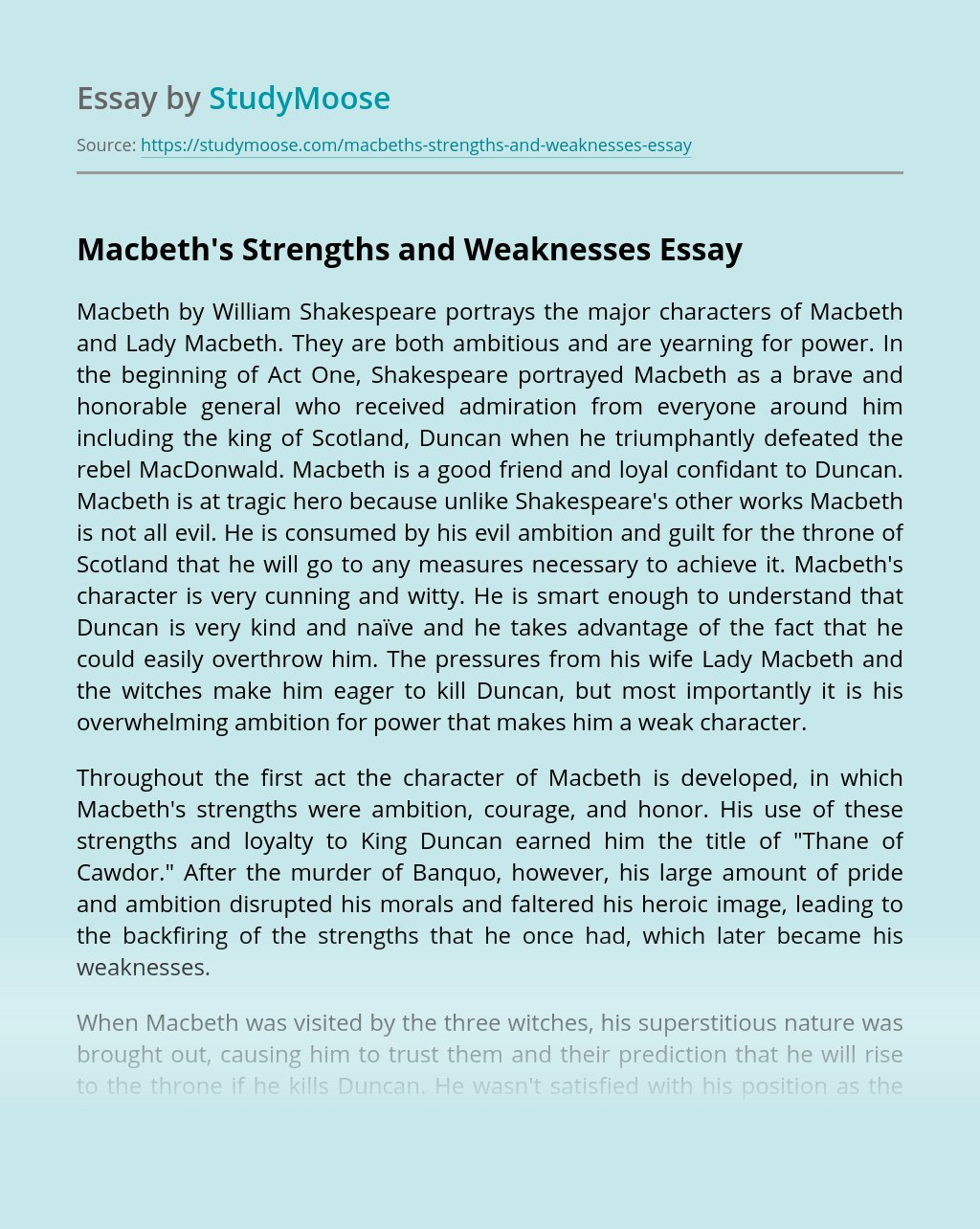