In Shakespeare’s screenplay, tragedies usually arouse feelings of pity and fear. Yet is the gradual breakdown of Macbeth enough for the audience to feel sympathetic for him? Macbeth is taken place in Scotland. It explores themes like power, desires, ambition and gender etc.. In the story, Macbeth is a general that, due to three witches’ prophecies, fell from a hero into the trap of dark desires for power. An interesting point to note is the relationship between man and woman in the story.

Don't use plagiarized sources. Get your custom essay on
“ Macbeth Essay: Is Macbeth a sympathetic character? ”
Get custom paper
NEW! smart matching with writer

Unlike classic views, Macbeth is a rather weak man at home and is dominated and influenced by his wife.

I think that there are three points that prove Macbeth to be a sympathetic character.

To begin with, Macbeth has never been treated fairly since the beginning. Firstly, the prophecies of the witches have never been fully true. They have hidden some of the truth and consequences just to spur Macbeth on. The prophecies is the reason to his thirst for throne and power.

Macbeth believes everything the witches said is true as one of the prophecies has already been fulfilled. Because of the partial-lies, Macbeth thinks of himself undefeatable. His moral conscience allows him to doubt if he shall trust them. Second of all, Lady Macbeth is one of the main reason that pushes Macbeth’s mind to murder. As Lady Macbeth craves for power, she entices Macbeth to listen to her through asking him to strive for money and power. She also threatens and mocks Macbeth’s manhood and courage as a “coward”, telling him to “screw [his] courage to the sticking place”.

During the murders, she even supports and supervises Macbeth in the murders by asking him to “leave all the rest to [her]”. Hence, Macbeth has so many outside influences, that it is much likely that he will not have continued with his thoughts to kill Duncan without the influence other characters made on him.

Moreover, I believe that Macbeth suffers a lot more than what deserves. He may have hurted a lot of innocent people, but the consequences he faces is much worse. First, he has been haunted by guilt ever since the first murder. He keeps on having hallucinations: the bloody daggers, Banquo’s ghost… These all marks Macbeth’s guilt and remorse that will permanently stain him for the rest of his life. Secondly, he is slowly becoming more and more isolated. He first loses King Duncan, a man that puts in a lot of trust in him, after murdering him with his own hands. He then kills Banquo, his “friend” and “companion-in-arms”, because of the threats he poses to him.

Near the end, he even loses his wife Lady Macbeth, who died from illness. At this point, Macbeth has already went from an isolated couple with Lady Macbeth to a totally isolated individual. He has nobody to confront with, nobody to talk to, he is all lonely. Third, his murders even cost his own life. The murders of Macduff’s family and Duncan eventually led to the revenge of Macduff and Malcolm. Therefore, we can see that Macbeth already has to face a lot of consequences due to his murders.

Finally, Macbeth has always been portrayed as a real hero in the public’s eyes. In the beginning of the plot, it is mentioned that Macbeth fights a lot of wars for King Duncan and has gained the title of the Thane of Cawdor. He fights so tremendously like “a giant of fury and courage” that “he made killing almost holy”. His bravery and success is even described as “supernatural”. Even when he knows that he is finally going to lose, he still says that he “cannot fly, but bear-like [he] must fight the course.” He feels like a baited bear, chained to be attacked just for pure pleasure of audience, trapped and lonely, yet there is no going back, he has no chance to win this battle or even go back to where he once is. Yet he never once give up and still continue to fight and be courageous in such hard situations. Therefore, we can see that Macbeth is a real hero.

Although some might say that although Macbeth is in grief and guilt, he continue to step further and murder more innocents. Even when Lady Macbeth repents, he never stopped to think what went wrong. In my opinion, Macbeth only did what a normal person would do. He only continued with the murders because there is no turning back. As he says, “I am in blood stepped in so far, … returning were as tedious as go o’er.’ His mistakes has left him no other choices, even if he admit his wrongs, not much can be done. To him, “another crime, another murder… but did it matter any more?”. He cannot turn back time. What done is done. He have to face the consequences of his faults.

In conclusion, Macbeth is a sympathetic character. He has a strong sense of honour and loyalty, even during the murders of Duncan, he is very resistant and faces a lot of guilt afterwards. It was only because of influence from others that turned him to his dark desires. The story would have turned out to be a lot different if Lady Macbeth is a typical woman. Macbeth will not have been motivated by so much without Lady Macbeth. Even so, when he found the witches to be a fraud, he still acts like a hero, faces the fact and fight with Macduff. Macbeth is a character that took in a lot of hits — from depression to conscience and psychological conflicts to loneliness and isolation. Therefore, no matter how much wrong Macbeth did, he already paid back through the consequences that hit him, he is a sympathetic character. 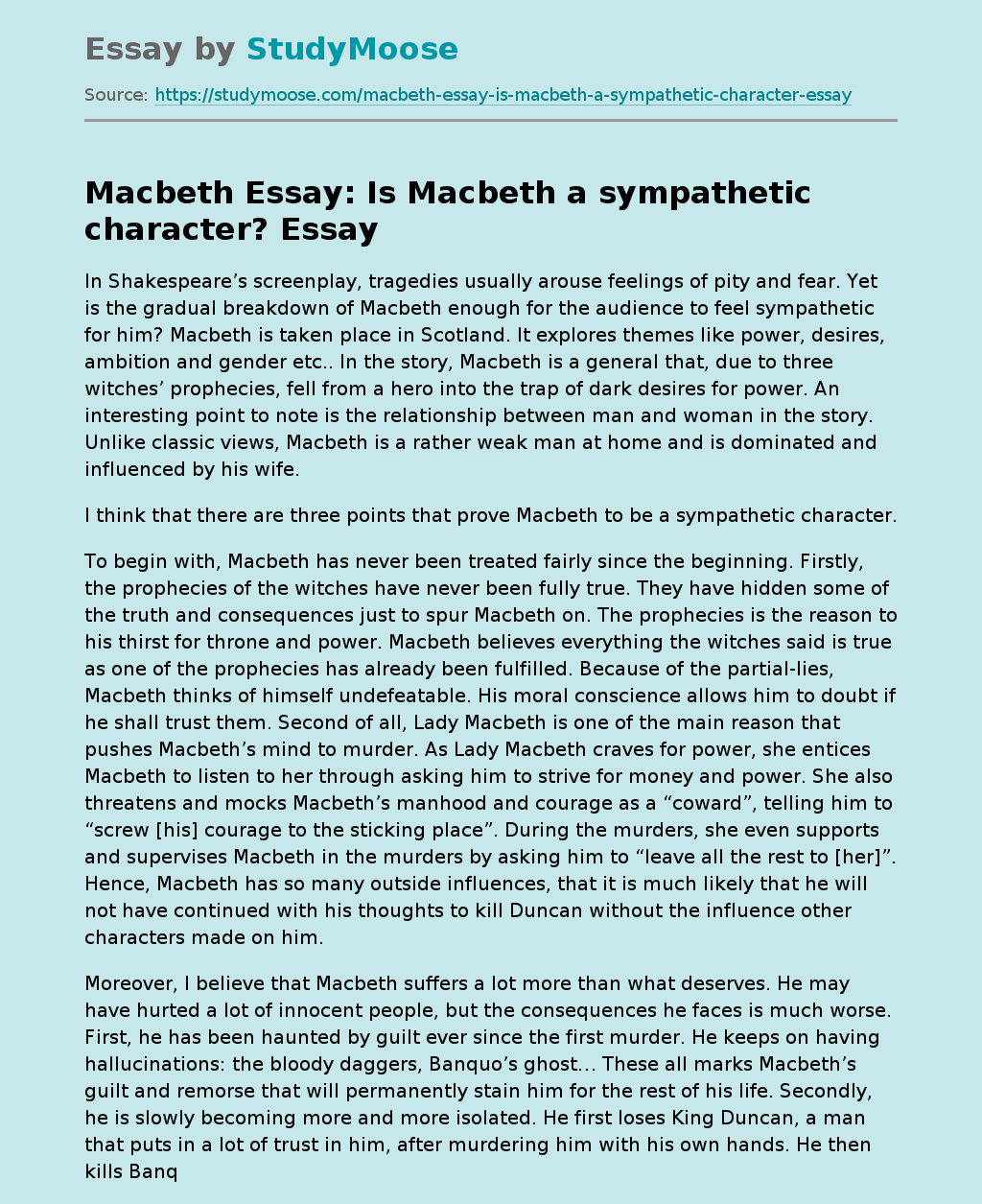