After reading the bet one can see Through the prisoner’s decision, the author proves to the reader that money is evil, money teaches life lessons, and when human will is tested it can be impossible to break. This story proves once and for all money is the root of all evil. When the young man told the older man, “The death sentence and the life sentence are equally immoral, but if I had to choose one I would choose the second.

Turn in your highest-quality paper
Get a qualified writer to help you with
“ Life Lessons in Anton Chekhov’s The Bet ”
Get high-quality paper
NEW! AI matching with writer

” This quote caused such excitement for the younger man, but he had no idea what he was soon to get himself into. As the older man made the 2 million/ 5year bet the younger man being young, naive and only thinking of MONEY caused him to over react. The young man said, “I’ll take the bet, but I would stay not five but fifteen years!” When the young man made this bet he was corrupted by money and not thinking about anything but his greed.

If he would of though about the bet for one day he was of realized he was losing the best years of his life. So after reading this one has proven that money causes spilt second decisions to be made all the time, and it usually turns out for the worst.

In ” The Bet” money teaches a few life lessons. When the man is about half was though his “sentence” he realized that he had learned so much that it is a reward in itself.

The anther wrote, ” In the sixth year the prisoner began zealously studying Languages, Philosophy, and History.” If it wasn’t for the Two Million he probably would never even thought about trying to teach himself Languages, Philosophy and many other teaching. So pretty much in an indirect way the money taught him languages, and many other lessons or free. The other major way money taught a lesson is when the Broker started to throw away money left and right.

The author wrote, ” Exchange, wild speculation, and the excitability which he could not get over, had by degrees led to the decline of his fortune.” After this the Broker became so distressed about being poor he was going to kill the man to keep his money. This story shows that no matter what your job is or how good you are with money, spending money all the time and not being thrifty can lead to bankruptcy or poverty.

When the man reached his sixth year, human will gave him the strength to discipline himself to learn many skills such as piano, languages, and to read many books. If his will was weak for any reason he could give up and leave the cell as he pleased. During the first year though it was torture on his body and soul. The author wrote, ” For the first few years of his confinement the prisoner suffered severely from loneliness and depression.” It’s strange that he could walk out of the jail anytime, but his human will wouldn’t let him. In the story he has also a indirect form of discipline, playing music. The author wrote, ” The sounds of the piano could be heard continually day and night from his lodge.” He had such great self-discipline that he could play for ours on end, and knew that he could leave the “jail” at anytime.

In conclusion Though the prisoners decision, the author proved to the reader that money is evil, money teaches life lessons, and when human will is tested it can be impossible to break. 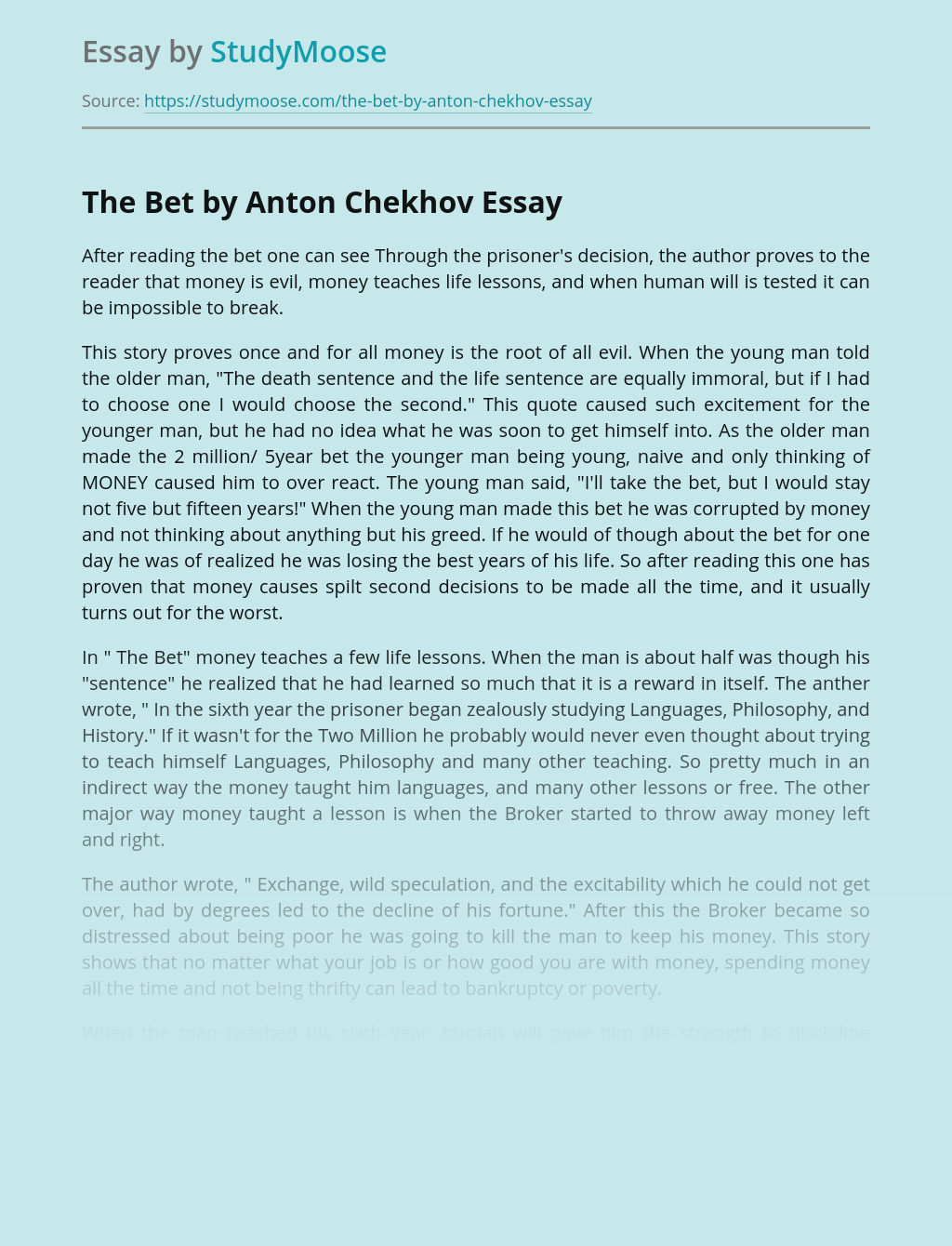 Turn in your highest-quality paper
Get a qualified writer to help you with
“ Life Lessons in Anton Chekhov’s The Bet ”
Get high-quality paper
Helping students since 2015
Stay Safe, Stay Original