Life and Crimes of Harry Lavender

Female protagonists are challenged to break the stereotype that women are weak, and to instead illustrate that women are just as capable as men in most if not all things. Marele Day’s, “The Life and Crimes of Harry Lavender” is a text in which the protagonist, Claudia Valentine subverts and challenges the male centred conventions of the crime fiction genre. She does this by being strong, who not only does the work of men, but also manages to thrive in a harsh setting where women are not ordinarily found.

Understanding her character, and the way that shapes her work, and where she lives is key to fully appreciating how Days’ text subverts the crime fiction genre. One of the significant ideas, explored by Marele Day is the issue of Gender. In the opening of the novel, Marele Day uses description to invite the readers to a whirlpool of “ash trays”, empty bottles of “Jack Daniel”, a nameless blond in the bed, a hangover and a messy flat surrounded with scattered clothes.

The use of imagery always the reader to understand this novel, is based upon a male protagonist.

The supposedly male protagonist wakes up the nameless blond before going to a funeral. He refers the nameless blond as “him”. The readers are in a state of conundrum to whether the protagonist is gay or Day has subverted the main character as a female. It is then on page three, Day reveals the narrator’s name – Claudia Valentine – and on page five that the audience learns her profession.

“People rarely come to private investigator with good news”, Claudia uses her familiar sardonic style to depict that the readers have been tricked the whole time on the issue of gender expectation. Through the opening novel, the readers understand how Day uses gender inversion and parody to combat the crime fiction conventions. The readers are able to understand that Claudia is a stereotypical hardboiled detective who fits the conventions of a typical Private Investigator. This is demonstrated when she visits the apartment of the deceased Mark Bannister in Bondi.

Claudia belongs to a tough world of fighting crime as she is tough and cynical and possess a great deal of physical strength. This portrayed in the quote, “My legs are my best weapon. I don’t carry a gun like some of my cowboy colleagues”. Parody and symbolism are used in the term “legs” because in the traditional crime fiction genre, the female legs are symbolic of attraction and love. Claudia also teases and adds sarcastic humour when she makes fun of the macho men. In addition, Claudia is a post – feminine version of the traditional Private investigator, who uses her intellectual power rather than her physique, “There’s more than one way of skinning a cat”.

Here, she uses idiom and typical terse, and witty, colloquial language style to demonstrate women unlike men possess skills other than brute strength and weapons. The readers understand that Claudia avoids direct clashes and harsh violent methods when locating and fighting her enemies. She only expresses her tough, heroic and hardboiled character by using karate as a means of self-defence. Through these extracts, Claudia challenges and subverts these gender stereotypes and Claudia most certainly foliaged into a feminist hero whilst turning the traditional detective genre on its head.

Furthermore, the setting of Sydney is profoundly explored when she steps into the corrupt environment of the video arcade. This is a typical crime fiction scene as merchandise are exchanged with a pay off. Day uses double entendre in the phrase “waiting for the developers to give them a new lease of life, or maybe just a new lease”. This emphasises the city as treacherous, where corruption is an underlying motif in the novel. The ‘stench’ of Sydney forces Claudia to equip many qualities and standards that showcases her hard-boiled detective nature. This is illustrated when Claudia ‘saunters’ over to the Maori (doorman), which implies that she is a confident, nonchalant, typical PI. Her communication with the Maori is terse and witty: the use of play on words “smack” and “score”, reveals Claudia’s usage of pun and humour.

The readers grasp the notion that these qualities are associated with typical PI which adds further entertainment, humour to the story and appeal to Claudia’s character as she tries to understand the city of Sydney.Marele Day displays finer points of Sydney as a corrupted and powerful dwelling. After she is kicked out by the Maori, she goes to the hamburger shop. While eating, she mentions two opposite poles of Sydney; Macquarie St and George St. She personifies George St as “brash”, “bright lights” and “winking”. With the use of personification, Day was able to create a lively vivid character. The readers visualise the modern city with its lavish lifestyle, beaches and harbour. In contrast, she reflects upon the corrupt and colonial history of Macquarie’s Rum Corps which in 1980s was represented as a corrupt ‘old boy’s network’.

This is where Sydney was depicted as “crime capital” of the South Pacific. Claudia is dismayed that Sydney is changing “My city from the city she grew up with into a corrupted empire whose morals are obsolete and filthy. Finally, the use of first person voice in this arcade crime scene, creates suspense and action. This is portrayed when Claudia paces to the container terminal where she describes it as “strong, menacing and all seeing”. Claudia uses descriptive language and she puts a clear image into the readers mind about the double edged urban setting as dark and sleazy. To add to the misty and daunting surrounding, fighting and action takes place. Claudia, after observing what happened in the container terminal was eager to breakout:, “For the moment I had a more pressing task: to get back to the car without being….Oh Christ!” (p.72).

First person narrative emphasises the readers concern for Claudia’s safety and her vulnerability. Day employed many action verbs in one sentence; “poised”, “kick”, “rolled”, “swung” and “swept”. Day, crammed all these action verbs into one long sentence to inform the readers about the rapid, dangerous events unfolding in the crime scene as well as to create an atmosphere mingled with tense and anticipation. Claudia’s quick thinking and wise action enabled her to survive in the sleazy, dangerous underworld. In conclusion, Marele Day portrayed a hard-boiled detective character by exploring two key ideas: Gender and the setting of Sydney. Through these ideas, Claudia Valentine subverted the crime fiction genre by breaking the stereotype that females are weak beings. Likewise, Claudia Valentine was able to thrive in a corrupt and harsh setting of Sydney, illustrating the notion that female women are just as capable as men in most if not all aspects.

Life and Crimes of Harry Lavender. (2016, Sep 20). Retrieved from http://studymoose.com/life-and-crimes-of-harry-lavender-2-essay 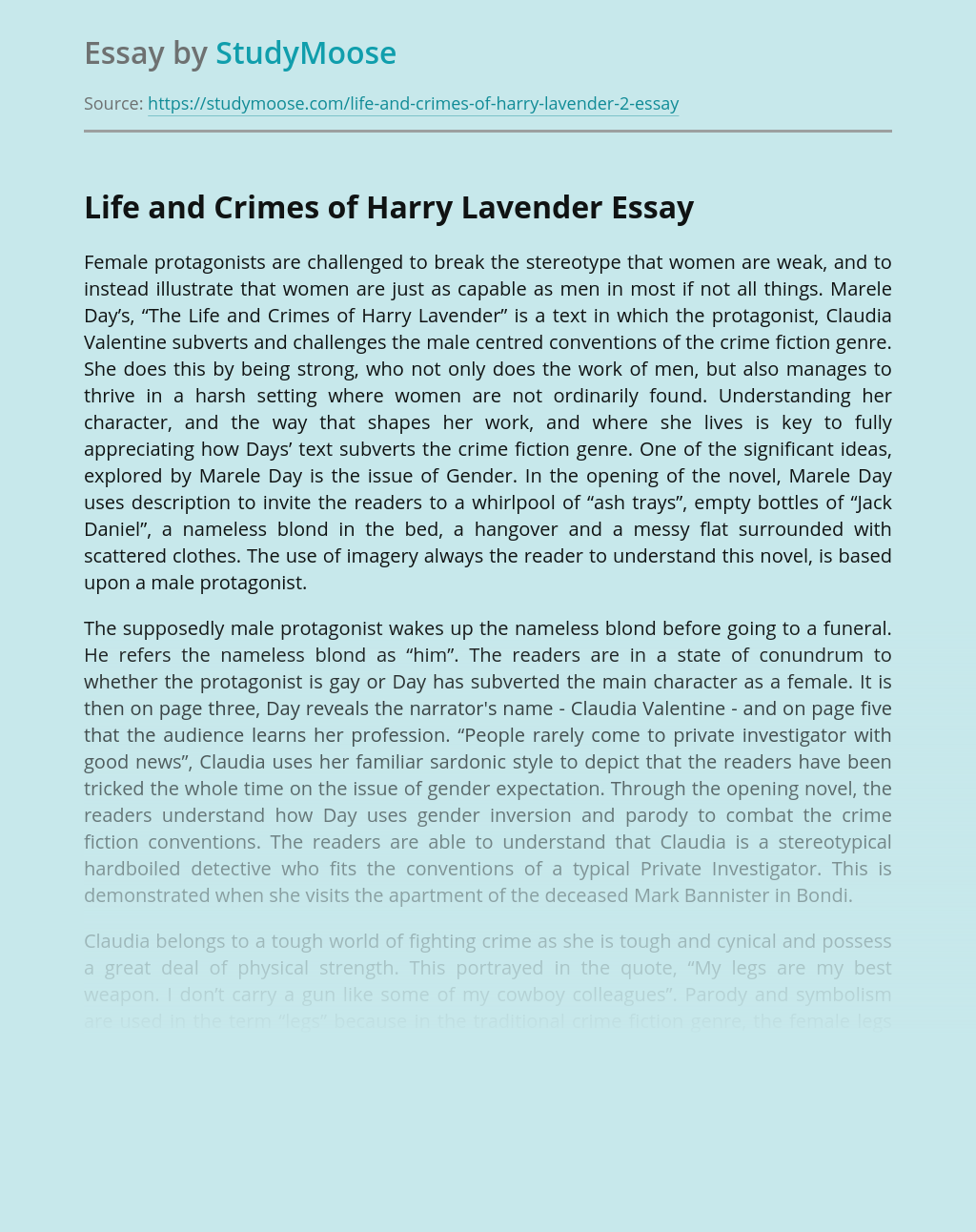 Don’t waste time
Get a verified writer to help you with Life and Crimes of Harry Lavender
Hire verified writer
$35.80 for a 2-page paper
Stay Safe, Stay Original