Originator: Lance Corporal Steven M. Spencer / 1262282666 / 0431 Task: Provide an essay summarizing MCWP 6-11 Leading Marines, also answer the question of, ‘Why did the Commandant of the United States Marine Corps want every Marine to read MCWP 6-11’, with 1000-1500 words. Method: By reading MCWP 6-11 Leading Marines, answer and write an analysis on the objectives given per instruction. End State: All guidelines will be followed to the highest standard and while answering these questions give support on the opinionating statements.

Don't use plagiarized sources.
Get Your Custom Essay on Leading Marines Just from $13,9/Page

For anyone to understand the United States Marine Corps personally, they would have to go through the process of transforming into a Marine. The Marine Corps stands out from every other branch of the any military in the world with a tremendous amount of differences. Yes, we have rank, pay and differences in authority, but what makes Marines more proficient in anything they do more than anybody else? Whenever somebody sees the Eagle, Globe and Anchor instantly they think United States Marine Corps or just the “Marines.

” We hold a standard that is not just known in the United States or is easily taught and absorbed, but known throughout the world.

Even though we except having our name tapes on our uniforms receive recognition for reaching impossible goals, we expect to be known as a Marine more than anything. There is no such thing as being selfish in the Marine Corps because Marines are instilled and trained to care for their fellow brothers and sisters who are common, but the traditional way we care for each other is only known in the Marine Corps. A change can and usually only lasts for a short period of time, but a transformation into a Marine is worth a life time. Failure isn’t in the vocabulary of the Marine Corps so we are trained to fight first, never to back down and win.

Learning the ways to become a Marine and the ways of the Marine Corps will evermore be the hardest lessons taught to you and to learn in life. No matter if you stay in for one enlistment or two, the depth of the Marine Corps is unknown so knowledge will continuously flow and it is endless. All Marines get taught the basics of being a leader in entry level training, but only a few can react to help form their trait into an elite skill only for them. In order to become the elite you have to build a “Foundation of Values” (pg.31) so that respect in all aspects will become evident between the followers and their leader(s). While setting the example it does not matter what rank you are, you still show that the standards that you hold will reflect on who you are as a person and a Marine. Each Marine chooses how their standards and ways will become beneficial not only to the Marine Corps, but to themselves also. Why do ethics make conducting a moment of decision making so hard? At some point and time every Marine will come to a point in their career or life where the grey area will be the path they choose, but will not think that it is the right way.

Moral and ethic dilemmas are common more and more each day. Every Marine is taught to be the toughest both physically, and mentally. The most profound and scariest ability of a Marine is the Quiet Courage. Even though not everyday a Marine comes to that point, it is a skill that takes time, blood, sweat and tears to achieve. Physically saying something is important, but body language is the most important aspect in life no matter what the circumstance. Having the ability to act without either hesitating or thinking for more than a few seconds about the next step is horrifying. You never know how not only your destiny, but your nation’s destiny and the destiny of your peers will change on a split second decision in combat. That’s why having the brotherhood bond with your peers and showing the mutual respect to your fellow brothers and sisters will help you focus on everyday lessons. Life lessons are endless.

The uncertainty of making life, perception, war and a new way of life all come into one and into harmony will form friction. The way things throughout your life add up to will either be lessons being taught to yourself or failures for others. What is continuously coming towards Marines everyday is the way of challenging. There is more than one way to challenge you, but what way is that? There will always be challenges for your morals, attitude and leadership throughout the Marine Corps. Exceeding any expectations will boost not only your moral, but the moral of your peers. Moral Courage is self-sustained, but can be turned on or off in an instant. If the standards cannot be met in tranquility then difficult decisions will become more evident not only in battle, but in peacetime or in peace.

Controlling the way a battle goes mentally throughout your Marines is very important, but physical courage, the urge to keep pushing forward is what gave us every reason of why we are known today. Having both moral and physical courage are challenges to overcome, but if adapting to a life style of quick teaching is too difficult for you then unit cohesion or embracing leaders is an imperative move; Also the innovation, winning and being the best Marine you can be will never be applicable to your life.

The main purpose on why I think the commandant of the Marine Corps wanted every marine to read Leading Marines is not only the lessons on how to strive to become a better marine, the book teaches the aspects from the bottom up so a full transformation can be seen. The basics is where every Marine gets the skills to start out with, but then the article goes into depth of what can happen, why you think happens and why it actually happens. Having more than one type of ability all built into one is what sets United States Marines apart from anyone in the world. The focus, leadership and the drive among the elite is what had not just made history, but is currently and forever will be carving the way through the heart of the few and transforming the few to the proud then the proud to the well renown elite Marine.

Leading Marines. (2016, May 18). Retrieved from https://studymoose.com/leading-marines-essay 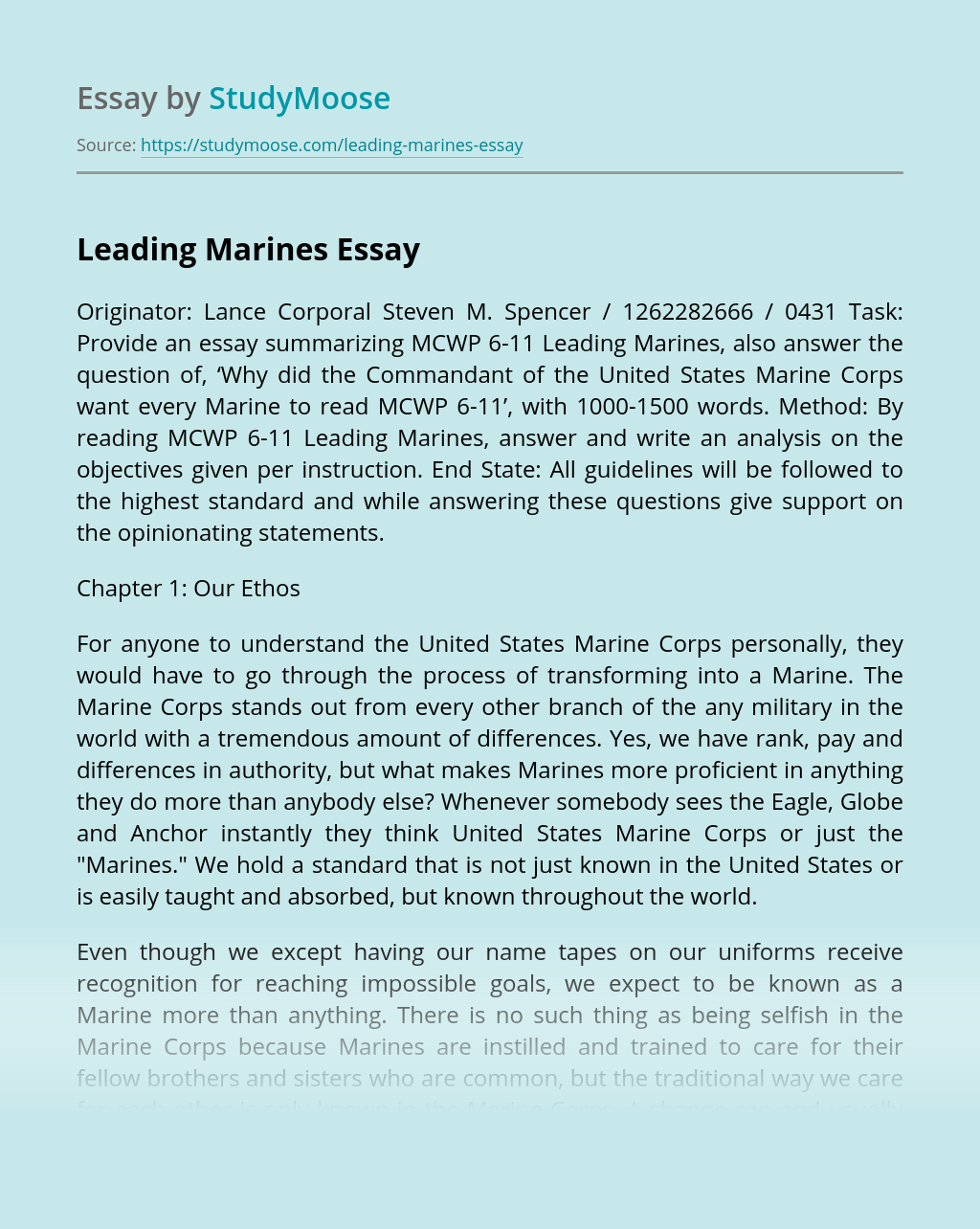 Be able to prepare to provide support for eating and drinking

Rate this post Question 1: Texas Nameplate Comapny, highlighted in the Performance Excellence Profile, is a small company with fewer than 50 employees and a high level of ethnic diversity. What challenges would such a firm face in implementing process design and control tools? A challenge that a smaller business might face in implementing process...

Rate this post Identify the range of service provision for health and social care (adults and children and young people) early years and childcare in own local area. Doctors Surgeries, offer a wide range of services to the public. Blood tests, medication for minor injuries, different types of vaccinations for example, flu vaccinations. They can also practise health check-up....

Rate this post Automobile repair is not only an interesting field to me, also I feel automobile maintenance is necessary knowledge to have in today’s auto market. Like studying for school or learning the skills of a job; I feel knowing how to repair a vehicle will produce a cost effective lifestyle, and take out...

Rate this post Answer No. 1Worcestershire Acute Hospital NHS Trust established in April 2000 which provides health care’s service in Worcestershire and the neighboring countries around 58000 people. When I was conducting an investigation as an investigation officer found that several incapability and insurgency are inherently related to the hospital.Problems:By using Maxwell’s dimensions of service...

Rate this post Individuals have dependably been traveling from one place to another, and more often than not trip has hardly been secure, regardless of the expenses and transportation implies. The quantities of free explorers that had managed dread of uncertainty, accentuated the significant part that wellbeing and security plays in settling on movement decisions...

Rate this post Michael Porter’s Five Forces analysis of competitive position provides the basis of a well designed assessment of the competitive rivalry present in the market and the analysis is based on the barriers to new entrants, power of customers and suppliers and availability of substitutes. The VoIP industry is prone to high competition...

Rate this post This is a technique involving collecting information from users about their specific incidents in an activity they involved in, the negative and positive incidents of the activity and eventually analyzing the data so as to assess how well services or goods offered to the users accomplish the intended objective. (Holloway & Daymon...