Throughout the play, Lady Macbeth is seen to be more of a masculine female because she is being stronger than how a woman would mainly act in the Jacobean era. However, throughout the play, she begins to realize her downfalls and then this leads to her finally becoming weaker. At the beginning of the play, Lady Macbeth is presented to be abnormal and Machiavellian because she takes on a role to be more of a masculine character. This goes against the Great Chain of Being because it says that men are superior and that women should follow a man’s rule, but Lady Macbeth is going against the Great Chain of Being.

Don't use plagiarized sources. Get your custom essay on
“ Lady Macbeth in “Macbeth” by William Shakespeare ”
Get custom paper
NEW! smart matching with writer

In Act 1 Scene 5 while she is reading Macbeth’s letter she says, Come to my woman’s breasts, and take my milk for gall, ‘. ‘milk’ presents a motherly, tender and benign character and it symbolizes pureness. However, the metaphor ‘take my milk for gall’ contrasts the meaning of lovely and motherly since ‘gall’ means stomach acid so this would be odious and could also be sordid since it is unpleasant to think about.

The Jacobean audience would be perplexed and maybe uncomfortable since a woman would be presented to be motherly, sweet and feminine so Lady Macbeth would make the audience unease sine she is presented to be powerful and unearthly.

However, in Act 5 scene 5, it is clear that Lady Macbeth has weakened since she has recognized her flaws. “Be gone you spots! Oh be gone! The spots remain” this is presenting to the audience that “spots” is blood and that they are also a symbol of her guilt because she’s saying that they aren’t going away so this is her conscience replaying the moment for her guilt to never leave.

Now, she is showing to be more feminine, frail and ailing since she is acting less powerful and independent female, so she is seeming to be more of a person who needs help and comfort.

Also, it is seen that she is hallucinating about the spots of blood on her body because they were never there and the number of times, she tried to make them disappear they always reappear again. This also represents that woman can never be as strong as men and that men will always be more robust because they can hold their emotions together and they can be more mentally stronger than women no matter the situation. The Jacobean audience would feel relieved because king Gorge had the most power overall, so if he was undermined by a woman then no one would see him be as powerful as he should be.

Overall, Lady Macbeth is displaying to be a powerful character at the beginning of the play to a weak person so this presents that she is not mentally stable to control her own emotions and that her destiny was to become weaker and helpless because women were not to be in the power of men and If they were then they were seen to be unearthly in the Jacobean era. 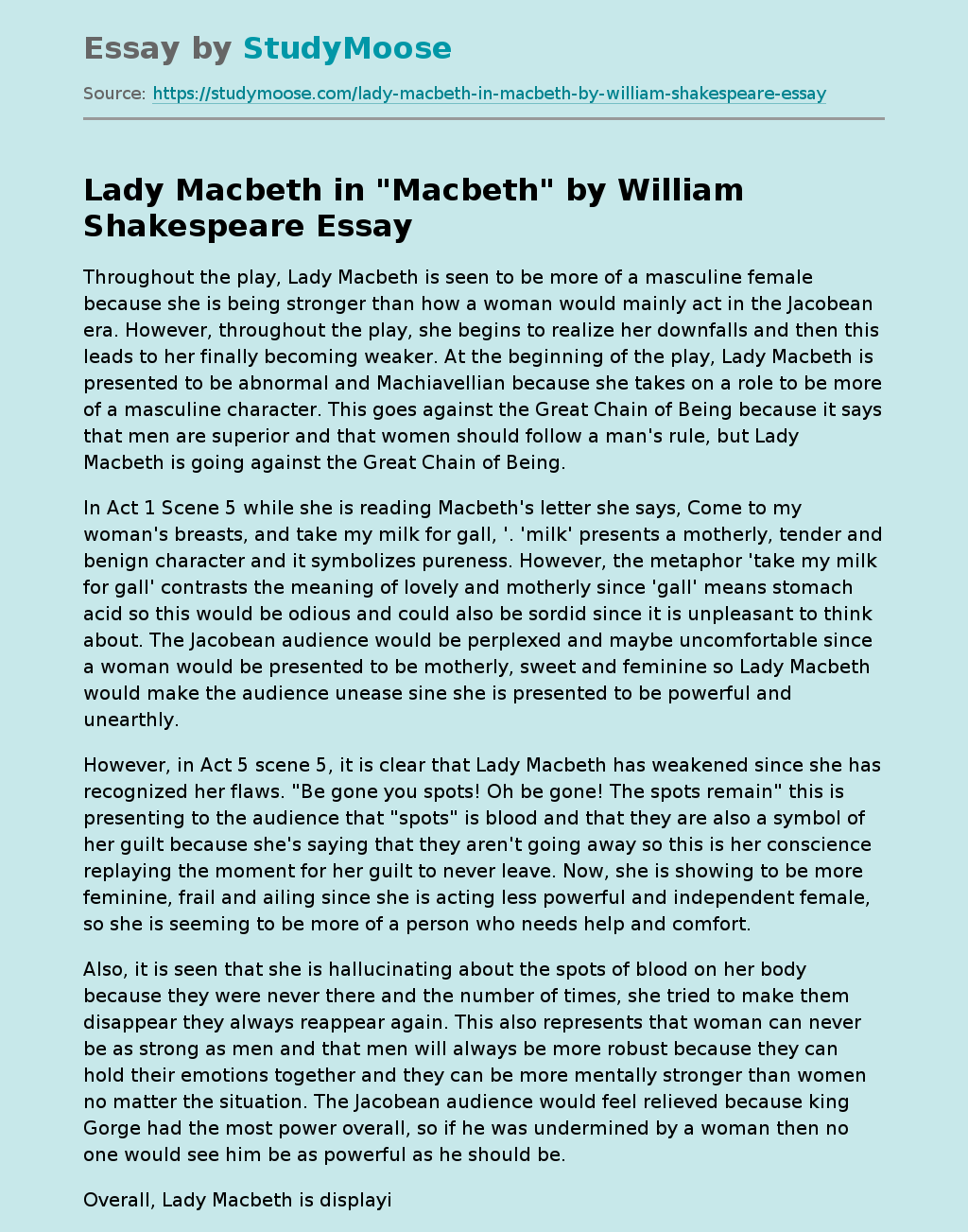