Lack of Nationalism and Patriotism of the Filipino Youth Today

“Lack of Nationalism and Patriotism of the Filipino Youth Today” Nationalism and patriotism both show the relationship of an individual towards his or her nation. The two are often confused and frequently believed to mean the same thing. However, we have lost that sense of nationhood particularly among youth. It wasn’t long time ago when young people here, loved to die for their country. The evident reasons were patriotism and love in their souls for their motherland. But the situation is not so now.

Don't use plagiarized sources. Get your custom essay on
“ Lack of Nationalism and Patriotism of the Filipino Youth Today ”
Get custom paper
NEW! smart matching with writer

Nowadays, if you ask them to die for their country, believe it or not, they either will slap you or laugh out loud at you, thinking it as a frivolous roguery, you are trying to pull at them. Many wonder, if there is a foremost problem, then there must be a solution to it, education reformation, globalization awareness and westernization regulation. Modern education is a major influence for such a situation because the subsequent generation was never taught of patriotic acts and sacrifices of people for their country which resulted in lack of inspiration and moral education also wasn’t encouraged as it should have been.

Young people were taught to be self-independent and to only ponder on their well-being. Movies and songs also stopped showing patriotism and partisanship and started making them believe in fantasies, driving them apart from veracity. These are the few reasons why the present generation is devoid of patriotism.

I believe that the Department of Education should give also importance on how nationalism be engraved to Filipino youth.

Globalization describes the processes by which economies, societies and cultures have become integrated through communication, transportation and technology. It is a new form of culture that knows no boundaries and is spreading globally which is quite alarming. Youth tends to be blind about the process of globalization in our country. For me, having knowledge about social culture is such a big count for patriotism. Westernization is a process whereby societies come under or adopt Western culture in areas such as industry, technology, law, politics, economics, lifestyle, diet, clothing, language, alphabet, religion, philosophy, and values. This particular process plays a big role in lack of nationalism of the Filipino youth today. Idolizing Korean-pop, adulating imported products and simulating foreign fashions are the norms.

In this case, parents and teachers or authorities must not tolerate those actions. They should be the first to encourage youth about nationalism and patriotism. The nation built by today’s youth will be the nation they pass along to their own children. If young people today wish their children to have an America of freedom, the young people of today must protect and defend that freedom by supporting our country’s greatness and working to make her ever better. The youth of today owe a debt to those of the past who sacrificed, worked hard, and even died to build us a free nation. To keep faith with those who have gone before and upon whose toil and sacrifice the nation was built, youth need to show patriotism. Through education reformation, globalization awareness and westernization regulation, nationalism and patriotism will not be lost among Filipino youth.

Lack of Nationalism and Patriotism of the Filipino Youth Today. (2016, May 14). Retrieved from https://studymoose.com/lack-of-nationalism-and-patriotism-of-the-filipino-youth-today-essay 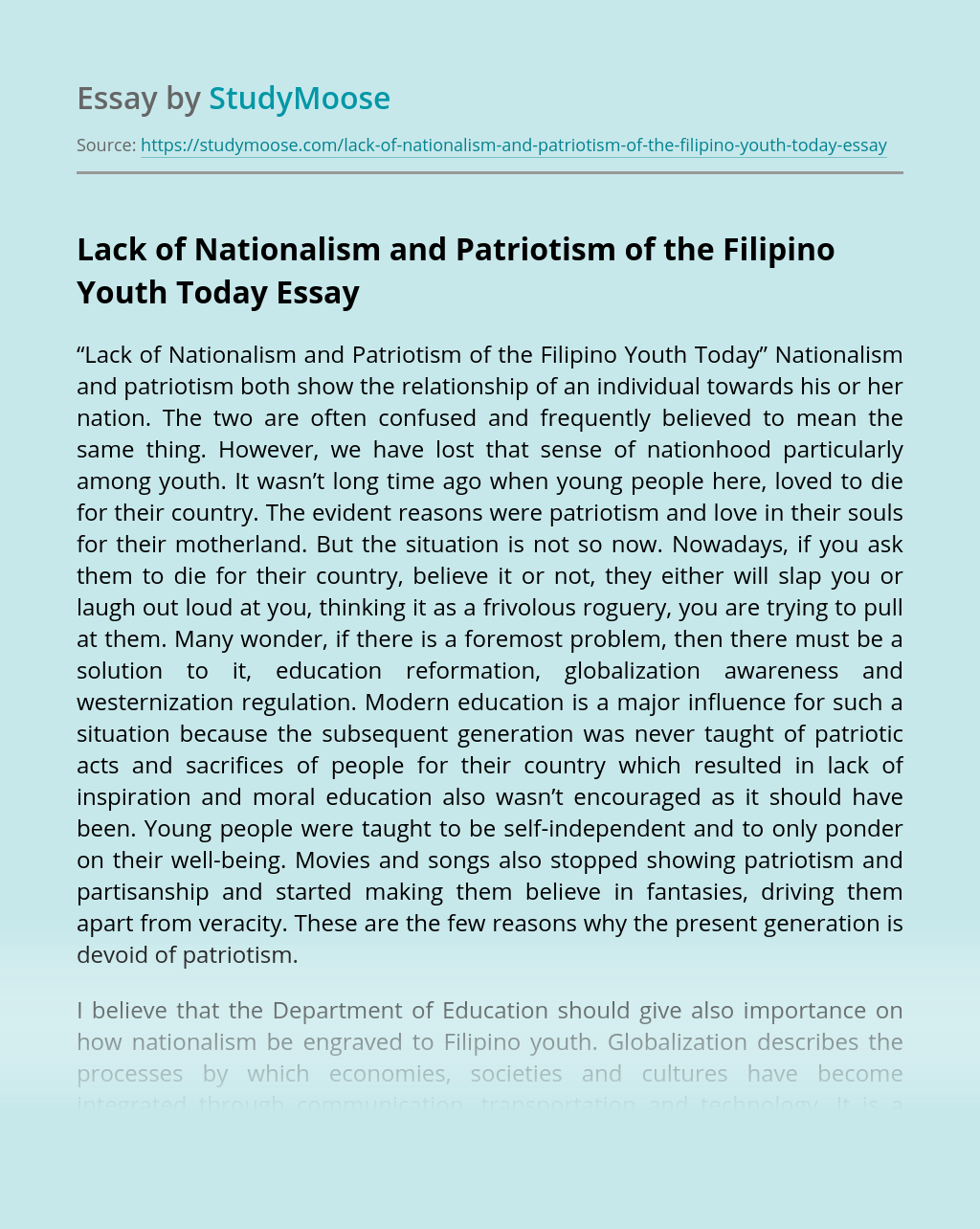