The prose piece, Kiss and Tell by Alain de Botton, offers the reader a humorous, as well as embarrassing, glimpse into the life of a young woman named Isabel. Botton establishes a comical ambiance between the daughter and her parents, by creating a situation that many can relate to, by way of dialogue.

Isabel faces an embarrassing, as well as common, circumstance, the presence of her parents when she desires it the least. When she first notices that her parents are attending the same show that she and her new boyfriend are she begins to commentate on their current state, her attention to detail is what one finds amusing.

Get a verified writer to help you with Kiss and Tell: Alain de Botton

In line five and six Isabel is quoted: “…And what’s that dress? It looks like a willow tree…” Botton uses an effective simile here to convey the daughter’s embarrassment in a comedic way by relating her dress to a completely different entity. When referring to her father, Isabel remarks “…And he’s about to sneeze.

Look, there we go, aaahhtchooo.

Out comes his red handkerchief. I just hope they don’t stop us and we can escape quickly at the end.” One might find this particularly amusing considering the girl goes from narrating her father’s actions, and without missing a beat, jars right back to planning her and her consort’s furtive escape. The onomatopoeia used in the quotation helps add to the imagery that the extract inspires, not only does one gather a mental visual, but an audible one as well.

Isabel’s words set the stage for the rest of the piece, which increases in its comedic daring as it progresses.

The parents’ reactions upon finding their daughter seated behind them reflect those that a child might make when meeting a long absent friend. Her father stands up, ignores that fact that an elegantly clad and refined audience surrounds him, and begins to wave energetically at his daughter; the text describes his motions as that “of a man waving off a departing cruise ship”. Isabel’s mother, when informed of her presence, begins to yell out her name in attempt to rouse her attention in “the presence of four-hundred people”. Isabel’s mortified response to her beau is “I can’t believe this, please let them shut up.” These responses of adults is comedic due to the fact that they are unexpected, for Isabel one cannot imagine how humiliating the experience must have been, especially in front of a new boyfriend, but he reader can find humor in the situation because it is not happening to them.

At intermission, Isabel and her boyfriend, on the parents’ instruction, met them at the bar; at this point, the prose piece became audacious with its conveyance of humor. The mother, while commenting on her daughter’s dress said, “Oh, well, it’s very nice, pity you don’t have more of a cleavage for it, but that’s your father’s fault. You know what all the women in his family are like.” One would expect a conversation such as this to be spoken in private and between only two people, not in a crowded playhouse in front of a strange young man who was dating the one lacking cleavage. However awkward this quote must have been for Isabel it is, by opinion, the most humorous part of the excerpt.

The way the mother simply blurted this out and did not think a thing of it is priceless. Another instance upon which Isabel’s mother possibly speaks before she thinks is during line 73. After Isabel has introduced her boyfriend to her mother she says to him, “She’s a lovely girl really” as if to assure the boy that, whatever conduct she had displayed so far, not to judge her to harshly. It was as if the mother expected her daughter to be a disappointment to the boy. One found it funny that the mother should assure the boyfriend of this when she was the one (along with her husband) who had acted so amiss in the theatre. The way Isabel’s mother obtrusively plows on with her speech is truly blithe, even if it is at the expense of her daughter’s pride.

Isabel’s father is somewhat of an oddity. His actions are withdrawn and contemplative. Isabel finds him staring at the ceiling, scrutinizing something. When she asks him what her is looking at he says, “I’m looking at the light fixtures they have. They’re new tungsten bulbs…” One found him an enigma, of all things to be focusing on in a playhouse he chose to examine the lighting. Perhaps this action denotes a depth to his psyche, or maybe it is just his way of keeping out the conversation between Isabel and his wife.

Despite the embarrassment Isabel’s parents put her through, she seems to have the full measure of them. She knows their tendencies; such is exposed in lines 18 – 21 and 85-86: “…This is prime argument territory for them, Mum will be asking Dad where he put the car ticket and he’ll get flustered because he’ll just have dropped it into a bin by mistake”. This is the assumption that Isabel makes about her parents, which is proved to be true in the following: “Yes I’m afraid I have (misplaced the ticket). They’re so fiddly these days, they fall right out of one’s hands”. Isabel also seems to know how to deal with her parents, one notices that she never once rebukes her mother for talking about her cleavage, nor does she admonish her father for not greeting her boyfriend.

Not once does she mention to her parents how embarrassing they are, in fact, while she speaks to them she uses almost formal diction when moments before she was complaining about them to her boyfriend. One gets the idea that she wants to stay on her parents’ good side, almost as if she wants something. The parents on the other hand, are very informal with their daughter; they also speak as if the girl is the only one present (except during the time which Isabel’s mother addresses her boyfriend). The informality of the parents and the decorum of Isabel are also somewhat humorous. It is almost as if the stations of parenthood have been shifted, with Isabel being the mature one, and her parents being the rash young ones.

It is obvious that this book was written during the mid 19th century, one doubts that the stern British of the late 18th century would have found much humor in Botton’s outlandish wittiness. Nevertheless, the comic effect of this piece is enhanced and made obvious by creating a circumstance that could happen to anyone, and supplementing in intentionally entertaining dialogue.

Get a verified writer to help you with Kiss and Tell: Alain de Botton 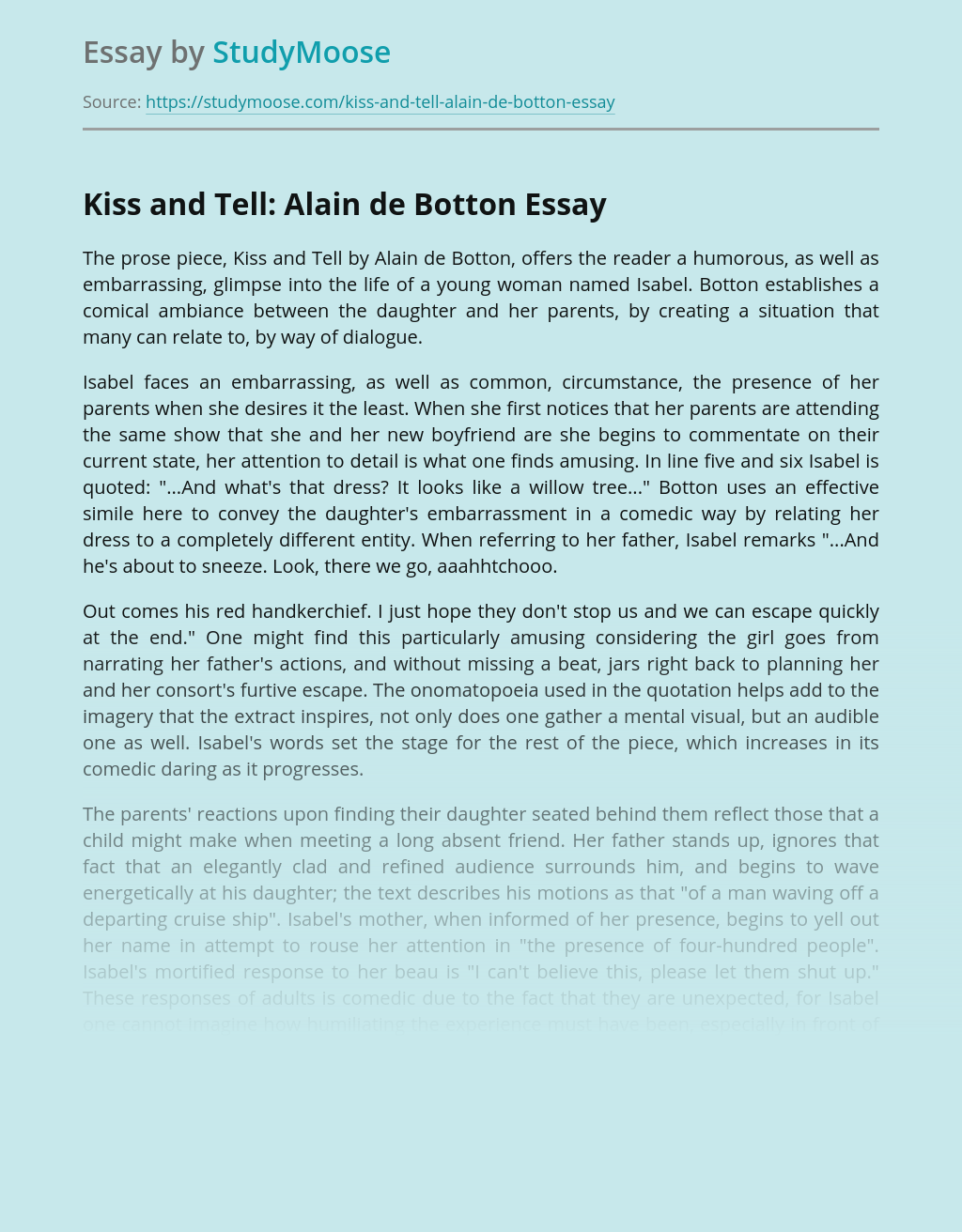 My watch means a lot to me, and is one of my most cherished possessions which I’ve ever had. It came about on a beautiful day I decided to escort “shade” my girlfriend to the Mall for some window shopping. That same day was my birthday. I had never celebrated my birthday, and I still...

The Style and Technique

Oral surgery has been clearly defined as a specialty of dentistry that deals with and includes the diagnosis, surgical and adjunctive treatment of diseases, injuries and some defects that are involving both the functional and aesthetic aspects of both the hard and soft tissues of the oral and the maxillofacial region. The diagnostic, surgical and...

Who are the born frees? They are those born post 1994 into a democratic South Africa. They were not part of the struggle, but reap the fruits of those who bled and fought for their freedom. It is you- the youth of today! What difference are you making? What sets you part from the older...

Rubbish Has No Value

It can be argued that rubbish is a thing that has no worth; it is what nobody wants, it is disvalued, so it is useless and has zero value (Brown, 2009, p105). ‘Worth’ can be an intricate term. Products have worth because individuals value them. What is rubbish to someone may have worth to another....

To Determine the Relative Molecular Mass of Chloroacetic Acid

Two drops of phenolphthalein indicator were added to the chloroacetic acid solution to enable us to determine when the solution is neutralized. Phenolphthalein is pink in basic and neutral solutions and colorless in acidic solutions. When 20.8 cm3 ï¿½ 0.1cm3 of sodium hydroxide were titrated into the flask containing 10.00cm3 ï¿½ 0.06 cm3 chloracetic acid...

Do the rich really live happier lives? Every week ‘70% of Britain’s adult population’1 rush out to buy a lottery ticket, that’s a staggering 45 million people who dream of having their lives changed by an influx of wealth. All of us have dreamt about winning the jackpot on the lottery at least once in...

Question 1 – A Leadership has been brought up more and more over the years which led to numerous definitions and interpretations of the concept. The most unsophisticated definition for it would be “having followers” according to Storey et al. (2016). A great amount of skills and qualities has to be on deck in order...