King Lear tells of an old, senile ruler who, having given up his title, divides his land between his two villainous daughters, and his third daughter is exiled. Parallel to Lears situation is the sub-plot of Gloucester, whose bastard son betrays him and his legitimate son Edgar. Shakespeare undoubtedly intended for the characters of Gloucester and King Lear to mirror each other, and by comparing them and their outcomes me can see how closely related they truly are.

Both King Lear and Gloucester are quick to anger, and thus their favoured children are quickly dismissed.

Don't use plagiarized sources. Get your custom essay on
“ King Lear and Gloucester: Mirror Images ”
Get custom paper
NEW! smart matching with writer

Lear rashly decides to split up his land according to which daughters flatter him most. Cordelia tells her father she loves him according to [her] bond; no more nor less(I.i.l 92), angering the foolish King, who has her exiled to France. Gloucester is also hasty in writing off his son Edgar, from whom Edmund forges a letter stating he wants his father dead so he can have his land.

Both characters are quick to anger, and quick to act, later lamenting the decisions they made.

Gloucester and Lear both make impetuous decisions regarding their children, being blind to the treachery of others. Lear is blind to the malice of Goneril and Regan: They say they love him, merely to get his land. They even lock him out of Gloucesters castle during a storm. Like Lear, Gloucester instantly believes the letter he is shown, being blind to the lies Edmund tells about Edgar. Edmund further manipulates the situation, betraying his father, and consequently Gloucester has his eyes ripped out.

When Lear comes upon him, Gloucester being then literally blind, he astutely observes that a man may see how [the] world goes with no eyes(IV.vi.ll.146-47).

Luckily for Gloucester, he is recovered by Edgar, who bec[omes] his guidesav[ing] him from despair, using various disguises. This is echoed by Cordelia, who comes to England with the French army to recover Lear from his mad wanderings in the countryside. Cordelia does save her father, just as Edgar defends his father from Oswald. Both characters are rescued by their favoured children, though later they both die.

It is clear that many similarities exist between Gloucester and King Lear, not only in character, but in their actions and outcomes. By taking a look at how the two characters are alike in King Lear, we may also further appreciate their differences. 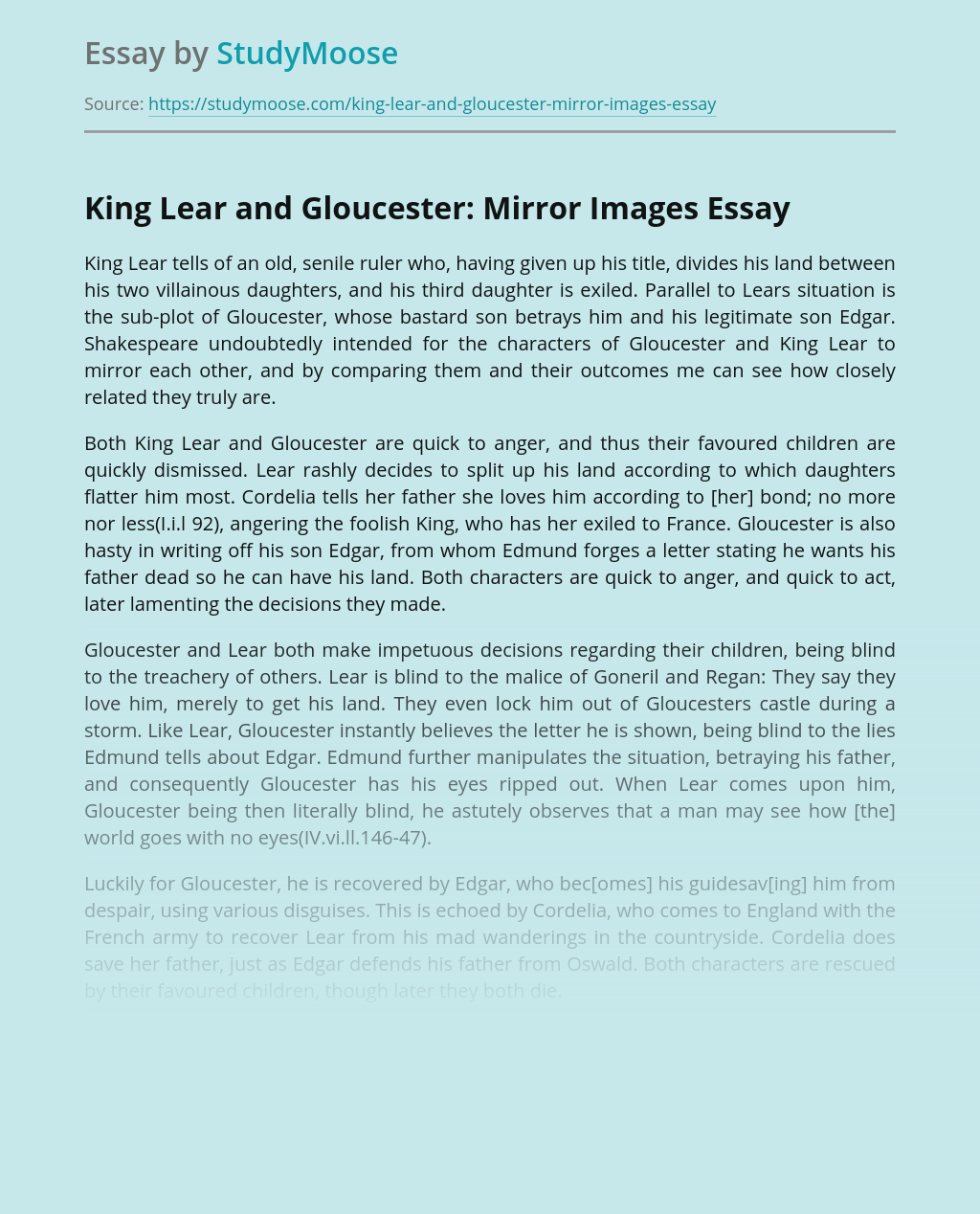