Killing innocent people with or without a badge is a crime, just as police brutality is another type of racism. According to Google Police Brutality is one of several forms of police misconduct which involves undue violence by police members. We have seen, read, and heard many cases of police brutality. It is always the same stories, different name. These type of cases are becoming more common and no one seems to be doing anything in order to stop them. It is not fair for an innocent person to die due to the quick judgement of a Police officer.

Don't use plagiarized sources. Get your custom essay on
“ Killing innocent people with or without a badge is a crime just ”
Get custom paper
NEW! smart matching with writer

Law enforcement officers are not doing their jobs well, they are abusing their power and are also assuming that everyone is up to no good. Police brutality can be caused by the act of policeman assuming everyone is doing bad things, racism and thinking they can do whatever they please, and it results in false accusations of young adults, death, and abuse of power by using unnecessary force.

When one thinks of a cop the first thing that should come to mind is hero. Law enforcement officers swear an oath, to protect and serve the citizens they represent. A representation of peace, power, justice, safety and much more. Cops should bring out safety, peace and protection in the streets. Although, a few years ago it was that way it is no longer true. But as time goes on people tend to want to avoid cops and hide from them. People are now not only frightened of cops, but can’t seem to give them the trust they deserve.

Cops are now assaulting, abusing and killing innocent people and these type of incidents are becoming more frequent. People are now terrified to be pulled over by a cop because they feel as if their life is at risk, it doesn’t even have to be dark outside for them to be frightened. The duties of Law enforcement officers, focus on protecting people and property(4). But with basic research we can see that cops have been doing quite the opposite. Nowadays it seems as if cops can’t do their jobs without any type of violence, there’s always an injury or someone innocent getting killed. If police did not kill people who were not posing a threat with a gun, there would have been 638 fewer deaths this year ” a 57% reduction(2017 Police Violence Report). 638 unnecessary deaths that could have been prevented if cops actually did their jobs correctly. These stats not only show that cops are not doing their jobs correctly, but they also demonstrate that they are killing innocent people and are abusing their power.Throughout the years we’ve been taught that anyone who kills is in the wrong, especially when killing innocent people. I myself have been taught that one should not kill under any circumstances. According to the article PRO/CON: ARE POLICE GOING TOO FAR? by Rachel Raasch says, Unjustifiably taking the life of an innocent victim is not simply a mistake. You can fix a mistake; you cannot bring someone back from the dead. When one individual is beaten or shot in the street by another citizen, people recognize that as wrong. The first sentence of this quote is something that we’ve never stopped to really think about. We know that everyone makes mistakes but killing someone isn’t only a mistake, it is something much more. All the families that went through the suffering of their dear loved ones deaths, could have been prevented. There’s plenty of cases of innocent unarmed victims being killed by cops. According to Harriot Michael, More people died at the hands of police in 2017 than the number of black people who were lynched in the worst year of Jim Crow (161 in 1892). This represents how many innocent people are dying. The numbers keep going higher and higher.. In the 1800-1900’s they would lynch black people because they thought they were evil and savages, and now cops are shooting innocent unarmed people for the same reason. Are cops abusing their power? Police killed 1,147 people in 2017. Black people were 25% of those killed despite being only 13% of the population(2017 Police Violence Report). Cops have been judging unarmed and innocent citizens way too quickly and those numbers seem to be increasing with frequency. Cops seem to be targeting colored people more than anyone. Police brutality is not a new issue. Police brutality is a this another type of racism. For example, Slavery, Jim crow laws, The Greensboro sit in, Rosa Parks, The Case of Emmett Till, Little Rock Nine, M.L.K., Malcolm X, and the list goes on and on. All these examples are about injuring or killing colored people. The Emancipation of Proclamation made all people held as slaves in the rebellious ( Southern) states become free, but division and racism between races did not end there. It seems as if colored people can’t rest. They’re always suffering, either by getting treated poorly as slaves, getting lynched or shot. 79% of Police officers are White, making that the most common race or ethnicity in the occupation(datausa). This is mainly why colored people are locked up and get pulled over daily. Racism is something that is still all over American. Americans always seem to think colored people as criminals and anytime there is a crime colored are the first ones to blame. …40 % of those shot by law enforcement each year are unarmed at the time of the encounter (Roy, 2004).Is it fair for cops to get away with anything they want? No, it is not. Cops think they can do whatever they want as soon as they get their badge. Cops get away with pretty much anything just by saying I thought it was the right call. Their ability to assume something evil and kill someone innocent for their assumptions has to end. For example the case of THE PEOPLE, Plaintiff and Respondent, v. JOHANNES MEHSERLE, Defendant and Appellant. Oscar Grant was shot on the back by the police officer who claimed to be reaching for his taser instead weapon and ended up killing grant. After a trial involving many witnesses, the jury found defendant not guilty of murder or voluntary manslaughter. This is evidence on how the police officer was found not guilty and got away with the murder. Cops talk to us rudely and expect us to be nice. When they give you instructions to do something they barely even give you a second to do as told, then the use force within seconds and if you do not cooperate immediately, they end up shooting you. The use of body cameras by police officers has exposed many of these situations. Infact, the only way that cops can be charged with anything is through video recorded evidence. Media reports have increased awareness. Most people carry around devices with video recording and with quick access to the Internet a single incident can be witnessed nationwide in a matter of seconds. Bystander videos prove to be valuable evidence in courtrooms where they are showing up more frequently. 92% of the 1,147 deaths were by police shootings. Officers were charged with a crime in only 13 of these cases, which is 1% of all killings by police. 9 out of 13 cases had video evidence. Most videos were captured by police body and dash cameras. President Barack Obama proposed investing $75 million dollars over the years to provide local police departments with up to 50,000 body cams. Officers in Rialto, California, started wearing body cams, and since then, citizen complaints against police officers have dropped 88 percent.

Killing innocent people with or without a badge is a crime just. (2019, Aug 20). Retrieved from https://studymoose.com/killing-innocent-people-with-or-without-a-badge-is-a-crime-just-essay 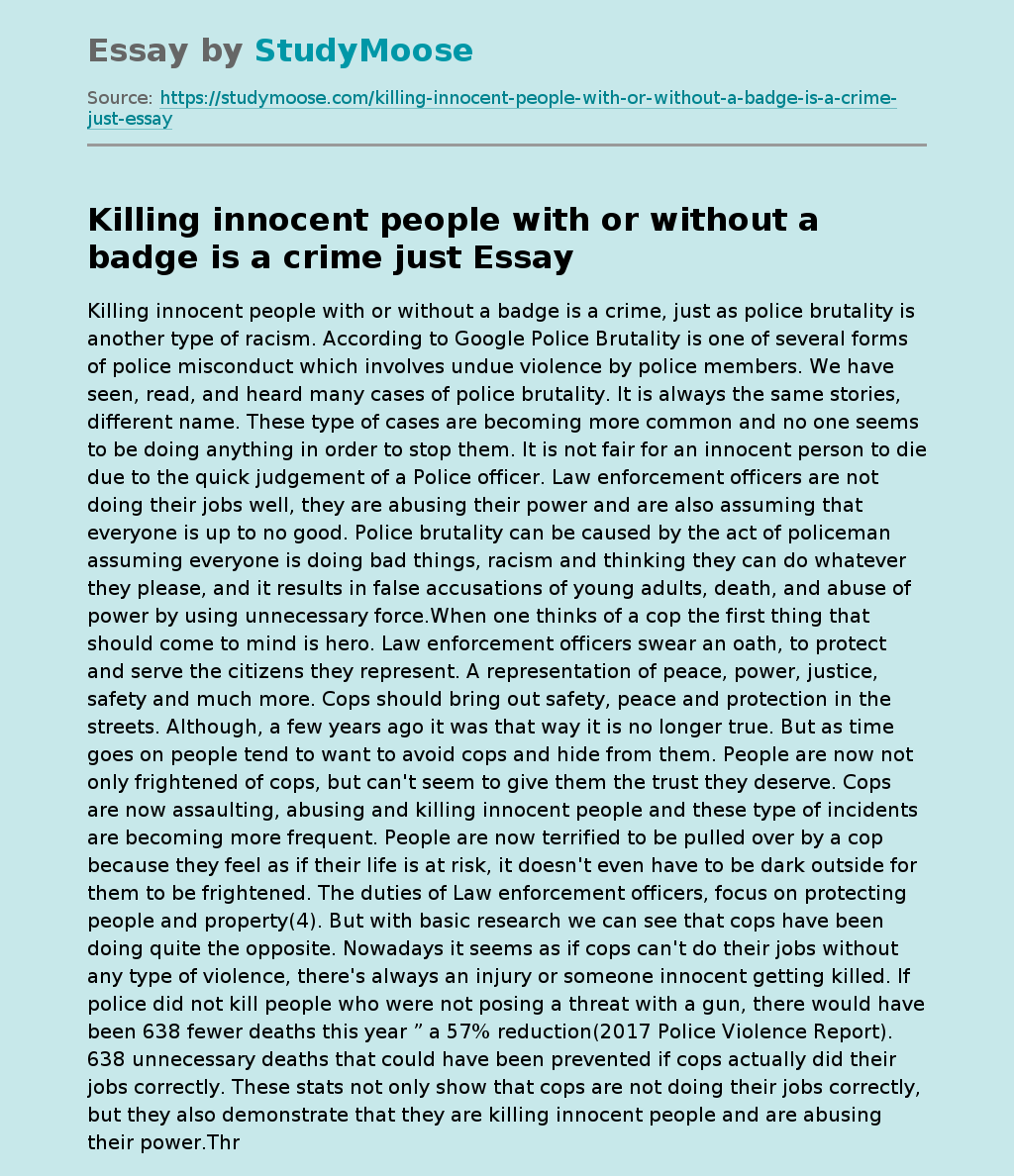