In Khaled Hosseini’s novel, The Kite Runner, the changing depiction of the pomegranate tree symbolizes the changes in Amir and Hassan’s relationship, and is woven into the novel’s central theme of sin and redemption. Throughout the novel Hosseini depicts Amir’s struggle to redeem himself ever since he witnessed the rape of Hassan and stood by as a silent bystander. Amir and Hassan shared a very close friendship doing everything together yet the loyalty between each other was lopsided.

Don't use plagiarized sources. Get your custom essay on
“ Khaled Hosseini’s novel, The Kite Runner ”
Get custom paper
NEW! smart matching with writer

Amir could never match Hassan’s unconditional love and loyalty towards him and this sets up the internal struggle in Amir’s mind, because he was sensitive enough to realize the unfairness of the situation. Hosseini uses the pomegranate tree throughout the book as the backdrop for describing key events that influence Amir and Hassan’s relationship. The first depiction of the tree portrays a safe haven but subtle details in the passage point to the events that unfold later.

As children, Amir and Hassan spent many hours under the shade of a pomegranate tree up on a hilltop where Amir would read stories to Hassan. Here the pomegranate tree is a symbol of comfort, a place where he and Hassan could be alone sharing the simple pleasure of storytelling. Amir’s description of the “shadows of pomegranate leaves dancing” on Hassan’s face depicts the protective aspect of the tree, a sanctuary for the two friends (28).

The tree and hill are symbolic of Amir and Hassan’s friendship; the tree is rooted in the hill but as the seasons change both the hill and the tree change and so does their friendship.

The mention of seasons foreshadows how over time Amir and Hassan’s friendship will be destroyed, in the same way that the rain had turned the “iron gate rusty” and caused the “white stone walls to decay” (27). When Amir and Hassan return to the pomegranate tree after the rape, Amir says to Hassan he will read him a new story as they walk up the hill and a sense of hopefulness is conveyed.

Amir points out that the “grass was still green”. Here the green is symbolic of hope and renewal and it connotes Amir’s effort to fix his damaged relationship with Hassan (91). However, when Amir describes that the green grass atop the hill will soon be “scorched yellow” it also foreshadows Hassan and Ali’s abrupt departure from Kabul, and the devastating impact this has on Amir and Baba (91). Hosseini’s use of the word scorched connotes an event that happens suddenly and is a premonition of worse things to come.

Amir is not able to deal with his memories of their happier days under the tree, and instead of storytelling he decides to provoke Hassan to reproach him for his own inaction when the rape occurred. Amir’s ulterior motives – to provoke Hassan and not tell stories – are revealed when he “picked up an overripe pomegranate” (92) and throws it at Hassan. The overripe, rotting pomegranate is symbolic of a wound that has been left alone too long, the guilt of Amir not helping Hassan when he was raped.

The pomegranate fruit itself represents the complexity of their relationship; it is a fruit with a hard skin that is difficult to peel and inside there are beehive-like segments hiding hundreds of red pulpy seeds. Amir is not able to come to terms with his guilt and tries to avoid Hassan at first, but later when he tries to make amends he realizes that for Hassan it will never be the same. The pomegranate also alludes to the forbidden apple from the Bible, symbol of the original sin, and thus it serves to foreshadow the events that are just about to unfold.

As Amir hurls pomegranates at Hassan, he repeatedly calls Hassan a coward, but in reality he is letting out his own frustration in the hopes that Hassan will retaliate. He is trying to cover up his guilt for not intervening when Hassan was raped, almost as if Amir is trying to justify that Hassan is the coward and not himself. Once Amir stops pelting the pomegranates he sees Hassan “smeared in red like he’d been shot by a firing squad” (93). The imagery here represents how deeply Amir’s actions and words had wounded Hassan.

Ironically, it also foreshadows the eventual death of Hassan, later in the novel, when he is shot by a Taliban firing squad. When Amir returns to Afghanistan after receiving Rahim Khan’s letter, he finds Kabul under the Taliban regime totally changed. As Amir walks up the old “craggy hill” from his past he realizes that nothing is the same (264). The craggy hill now represents the destroyed Afghanistan. Amir describes that while walking up the hill every breath felt “…like inhaling fire” (264).

This simile illustrates how much pain walking up the hill causes an lder Amir now, although it was something he did almost every day with Hassan when they were carefree children. When he reaches the pomegranate tree, he recalls Hassan’s letter saying “the pomegranate tree hadn’t borne fruit in years” (264). The barren tree is symbolic of how their friendship was ruined twenty years ago in the winter of 1975. But when Amir locates the faded carving of his and Hassan’s name on the tree, the fact that “it was still there” makes the pomegranate tree a symbol of hope once again and shows Amir a way to atone for his sin (264).

After so many years and so many struggles their friendship was tattered but upon seeing it, Amir finally resolves to redeem himself for the guilt of betraying Hassan; a betrayal that became a heavy burden on his shoulders for twenty long years through his silence and inaction. The changes of the pomegranate tree depict the changes in Amir and Hassan’s relationship. We first see it as the lush shady tree from Amir’s childhood where he and spent countless hours reading stories. Next it appears as the scene where Amir destroys his friendship with Hassan.

And finally, it is at the same but now barren pomegranate tree where Amir returns and locates the fading reminder of his long lost friend. Each conflict in Amir and Hassan’s friendship was always on Amir’s part. It was Amir who stayed silent when Hassan was assaulted, it was Amir who tried to provoke Hassan’s reproach by throwing pomegranates at him, but it was also Amir who made the effort at the end to rescue Hassan’s son and his nephew, Sohrab. Like the faded carving, Amir’s friendship with Hassan had faded but never completely disappeared.

Amir made the worst mistake of his life but he still had an opportunity for redemption, and that was by rescuing Sohrab from the Taliban and acknowledging him as his own flesh and blood If he didn’t, he knew he would go to his grave with the guilt of the sin he committed in the winter of 1975. While atonement for one’s sin is the central theme of The Kite Runner, the pomegranate tree is one of the main symbols used by the author to show Amir’s journey for atonement and redemption in the book. Hosseini’s repeated use of the pomegranate tree serves as a useful symbol to understand the evolving relationship of Amir and Hassan. 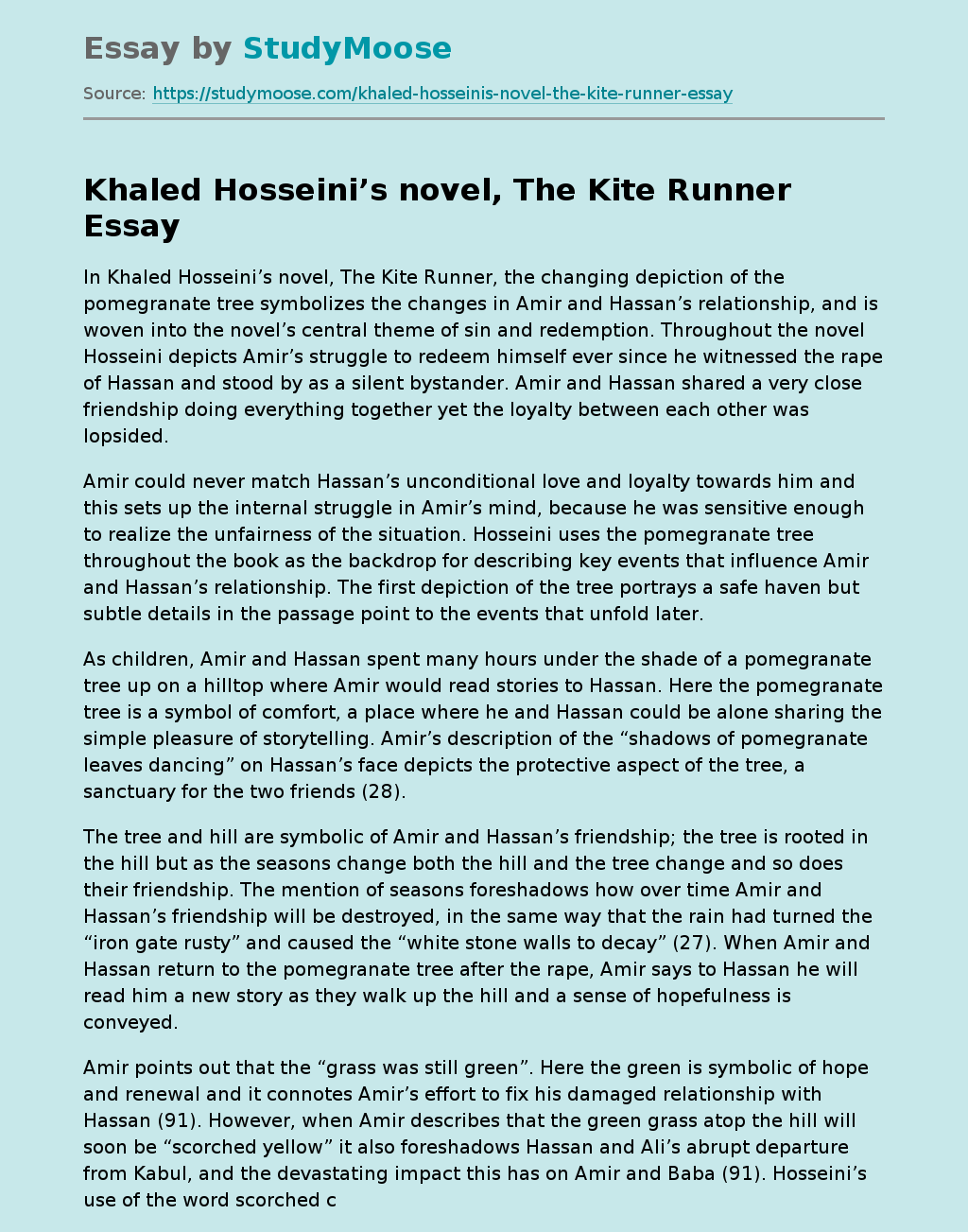