Kehinde Wiley have experienced racism himself when he was

Kehinde Wiley have experienced racism himself when he was young because of his race (African-American). At a time when he started doing this type of artworks young black men are constantly vilified in the press and mainstream media, and even murdered on the street by racist policemen, Wiley’s portraits are an essential document of the power, fashion, versatility and beauty of the black community in the USA.

Frida used all the tragedies (physical and psychological) that she have experienced in the past as a realistic style of painting.

Don't use plagiarized sources. Get your custom essay on
“ Kehinde Wiley have experienced racism himself when he was ”
Get custom paper
NEW! smart matching with writer

She always showed the artist suffering. She used this as a way to build her techniques towards making a painting.

Frida Kahlo is well-known for using symbolism such as animals to show the deeper meaning of the artwork. I think that the use of the black monkey, black bird, thorn necklace and the black cat in this piece symbolizes the dark past (physically and psychologically) that she have experienced. The tw butterfly on her head might be symbolising her claim about being born in 1910 (revolution of mexico) as she claimed that she wanted to start a new life.

Magdalena Carmen Frieda Kahlo y Calder?n known as Frida Kahlo is a mexican self portrait painter born on July 6, 1907, in Coyoac?n, Mexico City, Mexico and was married to Diego Rivera and is still admired as a feminist icon. She began painting self portraits after she was severely injured in a bus accident.

Frida painted in 3 different styles and they were; Magic Realism, a way to paint in a greatly realistic style to show imaginary scenes or images. Surrealism. A 20th century style of art and literature. Modern Art, a style to show the Vilceks love for the art of the country. Her subject matter wasn’t like others; landscape, or abstract etc. instead it was deeply emotional. Making hers different in other feelings than humourous. She showed the true meaning of life of what it meant to her

Frida used her tragedies- Physical and psychological as a realistic style of painting. She always showed the artist suffering. She used this as a way to build her technique towards making a painting.

Kahlo claimed to be born in the year 1910, the year of the outbreak of the Mexican revolution as she wanted to start her life on the new/modern Mexico. This information is characterized since childhood by a deep sense of independence and rebellion against social and moral ordinary habits, moved by passion and sensuality, proud of her “Mexicanidad” and cultural tradition set against the reigning Americanization: everything mixed with a peculiar sense of humour.

Later in her life, she become politically active and got married to her fellow communist artist Diego Rivera in 1929.

Drawing on her personal experiences (her troubled marriage, her painful miscarriages, her numerous operations), her works are often shocking in their stark portrayal of pain. Fifty-five of her 143 paintings are self-portraits, often incorporating symbolic portrayal of her physical and psychological wounds. Another thematic element in her work developed from her deeply felt influence of the indigenous Mexican culture, which surfaced in her paintings’ bright colors, dramatic symbolism, and unapologetic rendering of often harsh and gory content.Although Kahlo’s work is sometimes classified as surrealist, and she did exhibit several times with European surrealists, she never considered herself a surrealist. Her preoccupation with female themes and the figurative candor with which she expressed them made her something of a feminist cult figure in the last decades of the 20th century.

Description: The broken column is painted on 1944, and it is an oil on masonite. The broken is a particularly pertinent example of the combination of Kahlo’s emotional and physical pain which highlights her technique. This was painted shortly after Frida undergone surgery on her spinal column.

Analysis: The Broken Column shows a crying Frida, half naked, with tears in her eyes. Her body is covered with nailess and her body is open, this shows that her physical and psychological struggles are visible through the distortions of her body, which is fragmented, doubled, turned inside-out, and merged with non human elements. The earthquake-like background may also resembles with her past struggles. A broken iconic column replaces the artist’s crumbling spine and sharp metal nails pierce her body. The hard coldness of this inserted column recalls the steel rod that pierced the artist’s vagina during her bus accident. She also used a biblical reference as beyond its physical dimensions, the cloth wrapped around her pelvis, recalls Christ’s loincloth, again Kahlo displays her wounds like a christian marty. Overall, Frida Kahlo uses physical pain, nakedness, and sexuality to bring home the message of spiritual suffering.

Analysis: Frida Kahlo put so many symbolic creatures in this painting. She was not painting a realistic scene but using these symbolic elements to express her feelings. A bird butterfly is often symbolize freedom and life and its beauty. The humming bird is Always actively seeking the sweetest nectar, they remind us to forever seek out the good in life and the beauty in each day. The prime message of the hummingbird animal totem is: “The sweetest nectar is within!” Hummingbird animal totem meaning is about energetic resources. Just like ‘The Broken Column this piece shows a biblical reference through the thorn necklace wrapped around her neck which again may show a Christian Martyr. The thorn necklace is inspired by the thorn crown on Christ’s head which also symbolizes suffering. In this portrait, Frida Kahlo faces the viewer with background of large green leaves and a yellow leaf right behind her. The thorns are around her neck like a necklace which is held by a black monkey. Her neck is bleeding from the piercing thorns. On right side behind her shoulder is a black cat. A hummingbird is hanging on the thorn which knots around her throat. Her expression is calm and solemn. It also seems she is patiently enduring the pain.

Description: This painting, Self-Portrait with Thorn Necklace and Hummingbird, was painted by Frida Kahlo in 1940. Frida used symbolism to show her story and purpose.

Wiley’s work falls into the category of Identity Politics, which is art, film, and writing, which deals primarily with aspects of the artist’s identity, for example race, gender, and sexuality. It is vitally important to Wiley that black people, especially black American men, are both the subjects and the audience of his paintings. At a time when young black men are constantly vilified in the press and mainstream media, and even murdered on the street by racist policemen, Wiley’s portraits are an essential document of the power, fashion, versatility and beauty of the black community in the USA. Historically, the role of portraiture has been not only to create a likeness but also to communicate ideas about the subject’s status, wealth, and power. During the eighteenth century, for example, major patrons from the church and the aristocracy commissioned portraits in part to signify their importance in society. This portrait imitates the posture of the figure of Napoleon Bonaparte in Jacques-Louis David’s painting Bonaparte Crossing the Alps at Grand-Saint-Bernard. Wiley transforms the traditional equestrian portrait by substituting an anonymous young Black man dressed in contemporary clothing for the figure of Napoleon. The artist thereby confronts and critiques historical traditions that do not acknowledge Black cultural experience. Wiley presents a new brand of portraiture that redefines and affirms Black identity and simultaneously questions the history of Western painting.

His work is closely related to culture and life. Most of his photo look ‘American hood like’ this suggests that he must have been related to this type of lifestyle.The models he uses are normally dressed in their everyday clothes, which brings out the originality a lot. They wear urban street style clothes. Kehinde uses juxtaposition well to contrast the meaning of the photo which is linking the urban lifestyle to the olden days. By applying the visual vocabulary and variations of wealth, prestige and history to subject matter. Wiley makes his subjects and their stylistic references juxtaposed of each other, this forces ambiguity and makes the viewer confused and question on what they see.

Kehinde uses flat brush stokes and bravura brush technique and he tends to use vibrant colors that contrasts its background color to his model to draw the viewer’s attention to his model. His subject matter revolves around his own experience– racism,

Kehinde Wiley was born in 1977. He is a New York based portrait painter, with a Los Angeles native. He is mostly known for his highly realistic paintings of brown skinned people in quite heroic, regal like poses. He is known to be a racist, critics say this because the paintings he does where once a powerful white man, in which he exchanges for a firm piece of a male with an african-american origin. He was inspired by the old masters paintings.

Analysis: This portrait is typical of Wiley’s work, featuring a young black male subject depicted against an ornate background. However, this work also acts as an example of how Wiley responds “site-specifically” to different geographical locations. This portrait was completed in Brazil, and instead of his typical Rococo or Baroque backdrops, Wiley drew inspiration from the brightly patterned tablecloths found in the favelas, or shanty town, inhabited by poorer working people in Brazil. He brings a similar site-specificity to portraits done in other parts of the world. For instance, in West Africa, he was inspired by the African patterns found in the marketplaces, and sampled body positions from West African sculpture. Likewise, in Israel, he created his backgrounds based on Israeli paper cut outs. In this way, viewers of Wiley’s portraits completed outside of the Unites States are provided with instantly recognizable visual clues (regional and cultural specific imagery and patterns) to help them locate the work and the subject’s point of origin.

Description: Randerson Romualdo Cordeiro is himself a favela dweller, who Wiley met on the streets of Brazil. As in many countries and cities, people living geographically and conceptually on the outskirts of the town are thought to be unimportant and unsavoury.

Kehinde Wiley have experienced racism himself when he was. (2019, Dec 05). Retrieved from https://studymoose.com/kehinde-wiley-have-experienced-racism-himself-when-he-was-example-essay 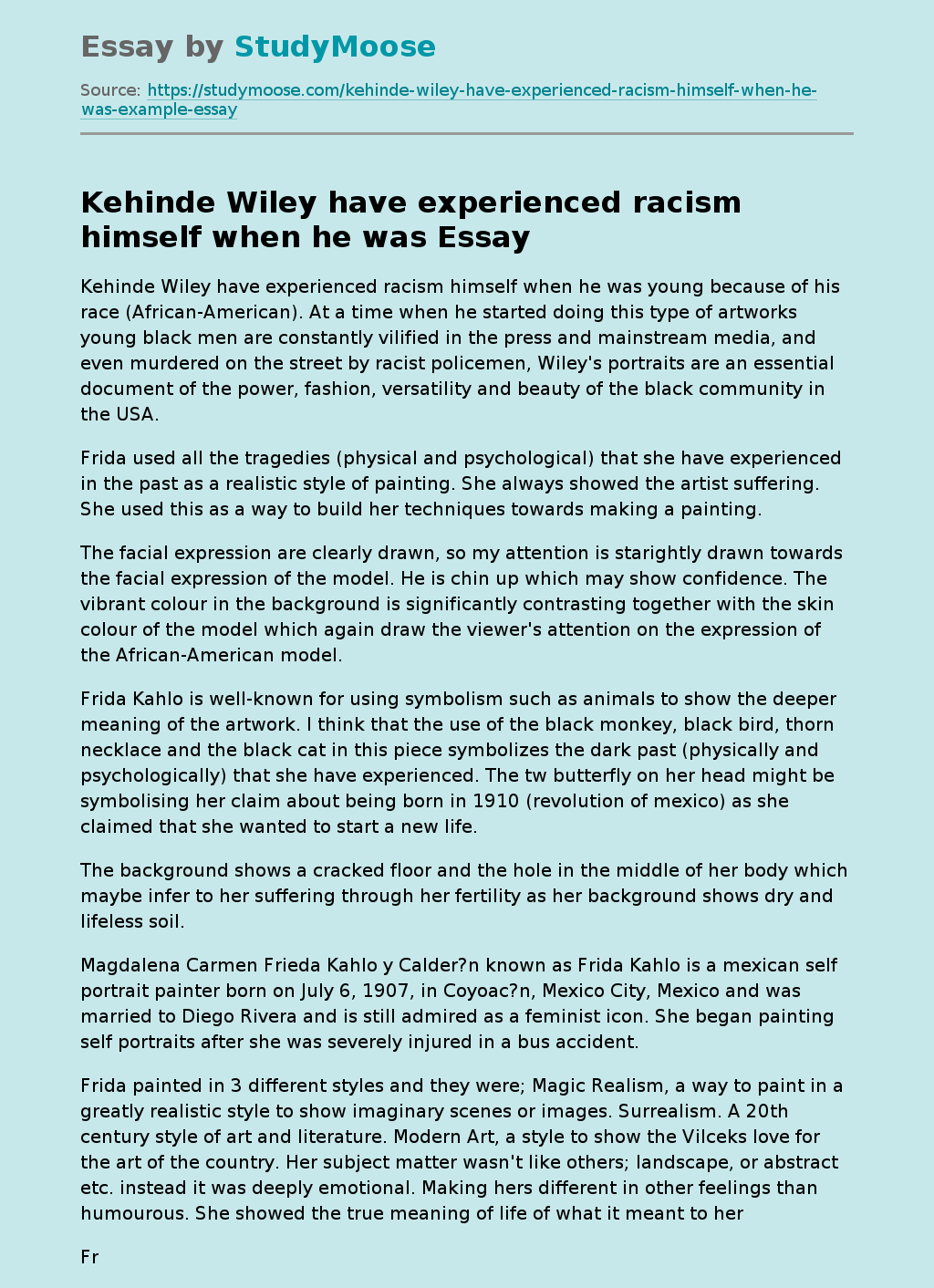