“According to some experts, mothers who kill their children are not as rare as we’d like to think. While exact numbers of children killed by their mothers is hard to pinpoint, some estimate it happens every few days in this country, at least 100 times a year”(2). Casey Anthony, the 25-year old mother of two-year old Caylee Anthony, sat in court for the past two-and-a-half months on trial for the murder of her daughter. Casey was arrested in 2008 for the murder of her young daughter, putting her in the national spotlight.

When the evidence from both the prosecution and the defense ended, the jurors went away to discuss and vote on a verdict.

Ten to eleven hours later, the verdict was in: not guilty. Disbelief. Shock. America was blindsided. One juror spoke out in a news interview saying there was not enough evidence to show how Caylee died. “How can you punish someone when you don’t know what they did” (5), she stated.

There was a wide range of evidence taken from Anthony’s car to convict her that included, “… chloroform,…hair that had signs of decomposition, according to the prosecution, the smell from the trunk of the car,… [and] the doll in that car that Caylee Anthony loved”(4). This case lasted four years and those years were the absolute hardest for Caylee’s family.

The evidence did not support Casey’s false accusations of sexual abuse that she leveled against her father and brother. Casey was also arrested and charged with child neglect, making false official statements, and obstructing an investigation.

Judge John Jordan was the one person standing between Casey and her freedom. He denied her bail when she appeared in court in 2008. Judge Jordan does on to say that Anthony, “showed a ‘woeful disregard for the welfare of her child’”(3), during which time the policemen from the Sheriff’s Department search Casey’s car and found several items such as o take as evidence.

When Casey found out she had not made bail, she hired legal Defense Attorney, Jose Baez. Circuit Court Judge, Stan Strickland, then set Anthony’s bail at 500 thousand dollars, after the Orange County Sheriff’s department (Florida) stated there was supposed incriminating evidence found in Anthony’s car. The prosecution presented all 12 jury members with the evidence, but while it was strong forensic evidence, “… the state [didn’t] have an air tight case against Anthony” (4), because the exact cause of death could not be proven. The state filed charged against Anthony on one felony count of child neglect.

On October 18, 2008, that charge was dropped on assumption that Caylee was dead. Ten days later, Anthony was arraigned and pleaded not guilty to all remaining charges. There were so many strong pieces of evidence that could have put Casey away for good, but the motive aspect of the case was lacking. On December 5, 2008, the death penalty option was taken off the table, saying it was “unconstitutional because jurors are not required to make findings beyond a reasonable doubt on the aggravating factors that can increase a guilty defendant’s sentence from life to death”(6).

After multiple tips from Roy Kronk, investigators finally discovered remains in a forest by Casey Anthony’s house that had similar structure to Caylee’s. The remains were sent to a forensic lab to get DNA tests done. They were in fact the remains of baby Caylee. In April of 2009, the death penalty decision was reversed and the option was back on the table from “sufficient aggravating circumstances exist to justify the imposition of the Death Penalty…”(7). Then, in September, Anthony’s defense team filed a motion to dismiss the murder charges against her because the state did not sustain evidence in the case.

The request was, of course, denied on the grounds that it was a murder trial. In April 19, 2010, Casey Anthony’s defense team wrote a statement accusing Judge Strickland of having inappropriate conversations with case blogger, Dave Knechel, criticizing and showing a bias opinion towards Anthony. Strickland dismissed then granted the motion and Judge Belvin Perry, Jr. took over the case. As the year went on, the hearings just became longer and more confusing. Judge Perry Jr. appointed 12 jury members, 5 men and 7 women.

There were numerous outbursts by lawyers on what is and isn’t scientific evidence used to sway the jurors and Judge Perry resulted and giving each lawyer a penalty of 100 dollars for each and every outburst. The trial began on May 24, 2011, with the opening statements. In their opening statement, the prosecution declares that Casey used duct tape to suffocate young Caylee. The defenses rebuttal was that the child really drowned in her grandparents’ swimming pool, and that Casey’s father George Anthony warned Casey she “…

would be imprisoned for life for child neglect and then covered up the death; thus she failed to report the incident for 31 days”(3). They also accused George Anthony of sexually molesting Casey as a child. The defense said for that reason she had a habit of hiding things that affected her emotionally but had no proof to back up this accusation. . The prosecution called George Anthony as their first witness. He denied ever sexually abusing his daughter or covering up the death of Caylee. Baez questioned whether Roy Kronk, who found the remains, actually removed them from somewhere else.

He denied any accusations of messing with the toddler’s remains. The prosecution called various friends and family of Casey Anthony to testify about her fabricated stories. One of them being Anthony’s ex-boyfriend who testified that Casey told him her brother, Lee Anthony, sexually groped her. The defense had no evidence to prove that he did sexually abuse Casey. A tow truck company manager also testified that the smell from Casey’s car resembled human decomposition, while George Anthony denies to the defense team ever having sexually abused Casey.

On June 4, 2011 an FBI forensic scientist testifies there was a single hair removed from the trunk of Casey’s car that was similar to a hair from Caylee’s hair brush. The forensic team to not specify if it was Caylee’s because of “root-banding” on the hair follicle. The “root-banding” looked similar with that from a decomposing body. Then, on June 6, Dr. Arpad Vass, from the Oak Ridge National Laboratory, testified that he used a gas chromatograph mass spectrometer to try and find signs of human decomposition. He had succeeded and also found levels of chloroform in the trunk of Casey’s car.

The traces did not give an exact amount, but the level did not appear to be large. This new found evidence supported the accusation that Casey had injected Caylee with chloroform to make her sleep while Casey partied. Instead of making her sleep, it killed her. Four days later, medical examiners stated that the death had to be ruled a homicide because of the delay in reporting the disappearance, the fact the body was hidden, and the existence of duct tape that was on the remains. That gives evidence, yes, but she still convinced jurors she did not know how the child died.

After all the relevant evidence was given the prosecution team rests its case. Then the defense team made a statement to acquit Anthony because there was not enough to say that a murder was even committed. Judge Perry Jr. denies the motion based on previous case rulings. The defense searched George and Cindy Anthony’s home for any evidence that might suggest they committed the murder and fine duct tape in the couple’s garage. Also, when remains are found underground in George and Cindy’s backyard, they, along with Lee Anthony, all testify that they bury their pets in the back yard. This made the defense question Mr.

and Mrs. Anthony’s involvement in the murder. “Cindy calls it a ‘tradition’ to wrap them in blankets and a plastic bag; duct tape was used to keep the plastic bags from opening” (3), and after this final witness, the defense rests its case. The defense presented their closing statements by saying there was no proof of how Caylee died, which did not emphasize beyond a reasonable doubt that Casey killed Caylee. They continue to say that after the child drowned, Casey panicked and George Anthony made the death look like a murder and that he was the one who put the body in the nearby woods.

Prosecutors Jeff Ashton and Linda Drane Burdick present a rebuttal to the defense saying their forensic evidence had proved their case, while the defense made claims they did not prove anything. They added the defense team just repeated fabricated lies told by Casey with no evidence to back up their accusations. Judge Belvin Perry, Jr. issues final instructions to the jury to make a decision based on evidence and keep the law in mind. The jury is dismissed and all there is left to do now is, wait. A grueling ten to eleven hours later the jury returns with their verdict.

The jury finds the defendant, Casey Anthony, not guilty with the charges of first-degree murder, aggravated manslaughter, and aggravated child abuse. Casey was found guilty of four misdemeanor charges of giving false information to a law enforcement officer. The prosecution, Judge Perry, America, and even Casey Anthony are shocked. People across the US are posting on Facebook and Twitter their opinions to this shocking verdict. Judge Perry stated, “I had to read it [the verdict] twice so I made sure I was reading it correctly” (1).

He sentenced Anthony to one year in county jail and four 1,000 dollar fines for each misdemeanor counts of providing false information to a law enforcement officer. After the one year jail sentence is served, Anthony was released on probation. Everyone in America is still, to this day, angry about the verdict saying Casey did not murder Caylee. Juror number three in this case, Jennifer Ford, spoke out in an interview with CNN and stated, “If you’re going to charge someone with murder, don’t you have to know how they killed someone or why they killed someone…

those were important questions that were not answered”(5). In my opinion, I think that Casey should have been convicted of child neglect and manslaughter. I think that she injected her with chloroform and went out to party. Instead of Caylee just sleeping for a long period of time, she died. When Casey found out, she took her body and buried it in the woods. The traces of chloroform in the trunk of her car, Casey not reporting to law enforcement when she found out Caylee was “missing”, the stench from the trunk of Casey’s car, and other evidence, prove to me that she had something to do with this murder.

The Casey Anthony trial was a case that made national headlines. The verdict still shocks people when they hear about it and very strongly disagree with it. I think Casey should have been arrested and convicted of manslaughter because I think it was an accident. I do not think she meant to kill Caylee, just knock her out for a few hours. I strongly believe Casey Anthony got away with murder and just because she got a not guilty verdict, does not mean she is innocent. 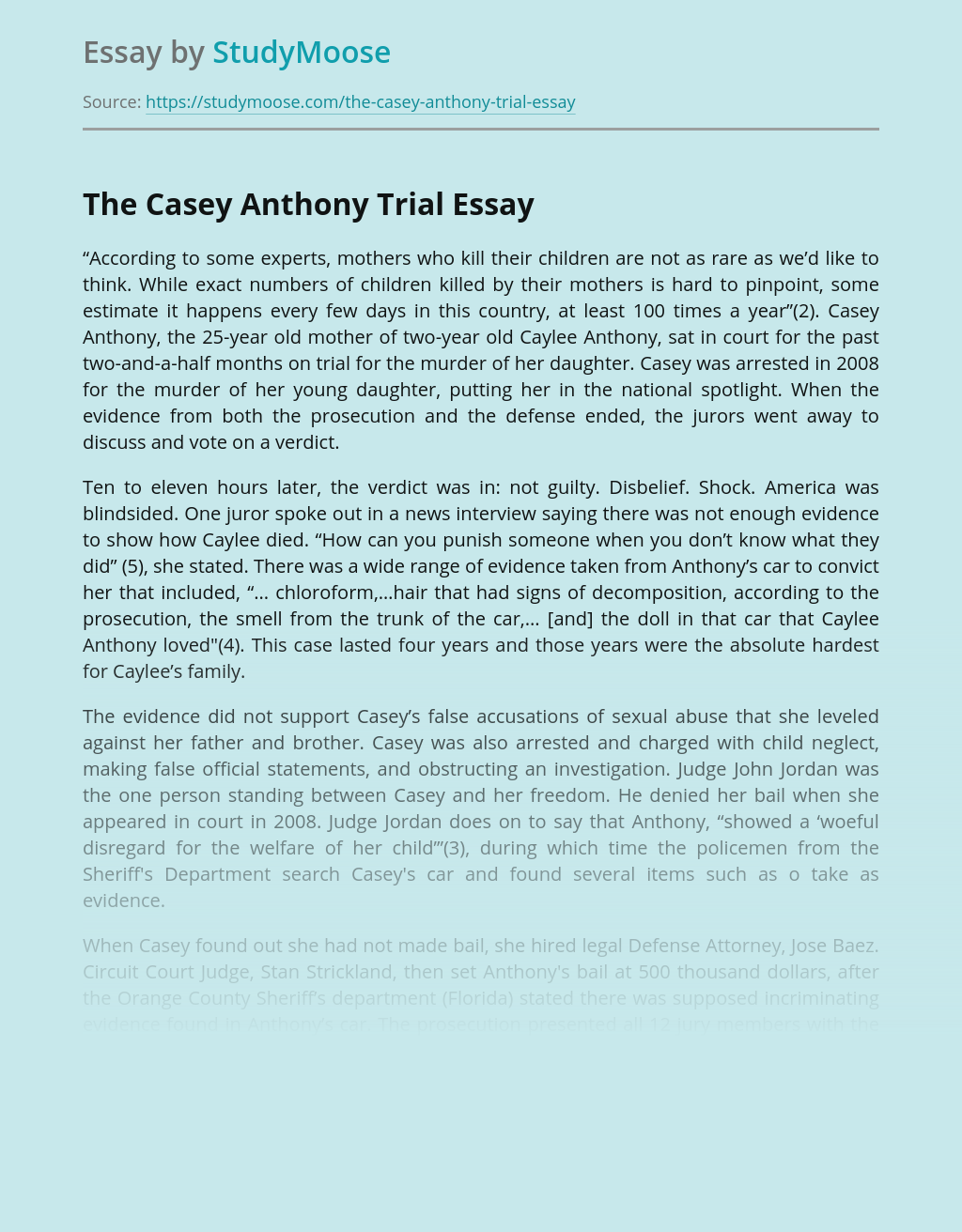 Don’t waste time
Get a verified expert to help you with Judiciary in The Casey Anthony Trial Case
Hire verified expert
$35.80 for a 2-page paper
Stay Safe, Stay Original