Courtroom trials are very interesting to me and I really enjoyed clerking for judges and being able to watch everything from beginning to end. The case I have chosen is a jury trial and that jury ends up being seven women and five men. The criminal laws that were violated were many starting with Child Neglect, making false official statements and obstructing an investigation. Forging checks, fraudulent use of identification and petty theft, first degree murder, aggravated child abuse aggravated manslaughter and four counts of lying to law enforcement.

Don't use plagiarized sources. Get your custom essay on
“ Casey Anthony Case ”
Get custom paper
NEW! smart matching with writer

Heading the prosecution was the District Attorney of Orange County Florida with several of the Assistant District Attorney’s. The defense has Jose Baez and what they were calling a ‘team’ of defense counsel, which actually ended up only being 3. Judge Belvin Perry was on the bench and all of the witnesses that were on both the states list of witnesses to call but the defense as well. The outcome of this trial rocked the nation as the verdict was read live which were Not Guilty of Aggravated Murder, Aggravated Child Abuse and Aggravated Manslaughter.

The defendant was found guilty on 4 counts of the forgery of checks and was credited for time served, then released from jail. Casey Anthony made national news for several days and remained the top story. She had been charged and arrested with murdering her two year old daughter, Caylee Anthony. Casey denied ever knowing anything to the police of her whereabouts and told law enforcement that her nanny had taken Caylee by force and she had been looking for her in different avenues, to supposedly protect the child.

Also stating she should have contacted police sooner than 31 days prior, but she was in fear for her daughter’s life was the story she stuck to. After being jailed and held without bond pictures of the young mother were posted all over “My Space” portraying Casey Anthony as nothing but a party girl. It wasn’t until the actual trial started and the story took a huge flip and George Anthony who is Casey’s father and grandfather of little Caylee, was being accused of sexually molesting his daughter since she was 8 years old and covering up the truth about the whereabouts of the two year old.

Since Casey had been a child, she had been taught to cover up and lie about certain situations if it was going to cause embarrassment to the family. It was George who had found the lifeless body of Caylee Anthony, lying face down in their pool and the cover-up began. George Anthony did not want it to get out that the family was irresponsible and left the ladder out to get into the pool. Which the story reads, little Caylee climbed up that ladder and got in the pool herself, due to no supervision and drowned. Skeletal remains of a small child were found 3 months later within a mile of the Anthony home.

The body had been discarded like a piece of trash, and her remains had been duct taped in a black garbage bag and tossed into the woods. It became media frenzy and, Orlando, Florida became the busiest it had ever been since the child had gone missing. It was in fact the remains of Caylee Anthony and to this day, the young mother sticks to her story and accuses her own father of covering the death of her child up and forced Casey to go along with it. She had been taught to obey her father and did not want to go against his strictness and allowed George Anthony to dispose of the body.

The trial that began on May 24, 2011 went to the jury on July 3rd 2011. Deliberations were suspended over the 4th of July holiday and resumed July 5th. During its deliberations, the jurors did not ask to review any of the 400 exhibits, request any clarifications of the law or ask for any of the trial testimony to be read back. After deliberating for 10 hours and 40 minutes, the foreperson informed the court that the jury had reached a unanimous verdict that afternoon. More often than not when a jury returns a verdict that quickly and without asking for any type of assistance from the court, it bodes ill for the defendant.

This jury, however, was about to prove the old maxim that juries are unpredictable despite what all the talking heads predicted it would conclude. The jury found her not guilty of murder, aggravated child abuse and manslaughter. She was however, convicted of four counts of lying to police officers. Judge Perry sentenced Casey to one year in jail and $1,000. 00 in fines for each of the providing false information counts. She was released from jail on July 17, 2011due to time already served. While Casey had been acquitted in her daughter’s death, Casey’s problems were not at an end.

The defamation suit of Zenaida Gonzalez who Casey accused of kidnapping her daughter (one of the false statements) is seeking both compensatory and punitive damages. Gonzalez states she lost her job as a result of Casey’s allegations which led to the loss of her apartment by eviction and she and her 6 children continue to be harassed and threatened. (Kumar) It has changed how society works today by taking more “child missing stories” more serious and not to the facts of the case, but the simple fact that the 12 person jury could not convict her due to lack of evidence.

The State of Florida had not proved their case and she was walking free except with a few misdemeanor charges of lying to law enforcement. How could this have happened, with all the circumstantial evidence of her guilt was obvious, the jury stood by the law? The evidence did not prove that Casey had been involved at all without finding any DNA or any other minute evidence. At almost the end of the trial, Casey asked to be evaluated by Psychologist and Psychiatrist to see if she was mentally capable to continue with the trial. She was found competent and the trial continued til the end finding her not guilty.

All of America disagreed with the verdict except the defendant and the defense counsel and still held her responsible for her daughter’s death. Society even went to the extreme as to calling the jury “idiots” I believe Casey Anthony led a not so great life, but was also a spoiled brat who always got her way. So with the news that she was walking free didn’t surprise me, as I couldn’t see any physical evidence either. Sad but true, she is out living her life without her daughter and it does not seem to bother her a bit. Casey is in hiding though as of today and knows there are people out there who hate her.

She has started to learn and recognize her lies and what they did to people, and has told friends she has a lot of regards. Other sources say she plans to receive psychological counseling. She is young and optimistic and realizes she can’t change the past but she can move forward. 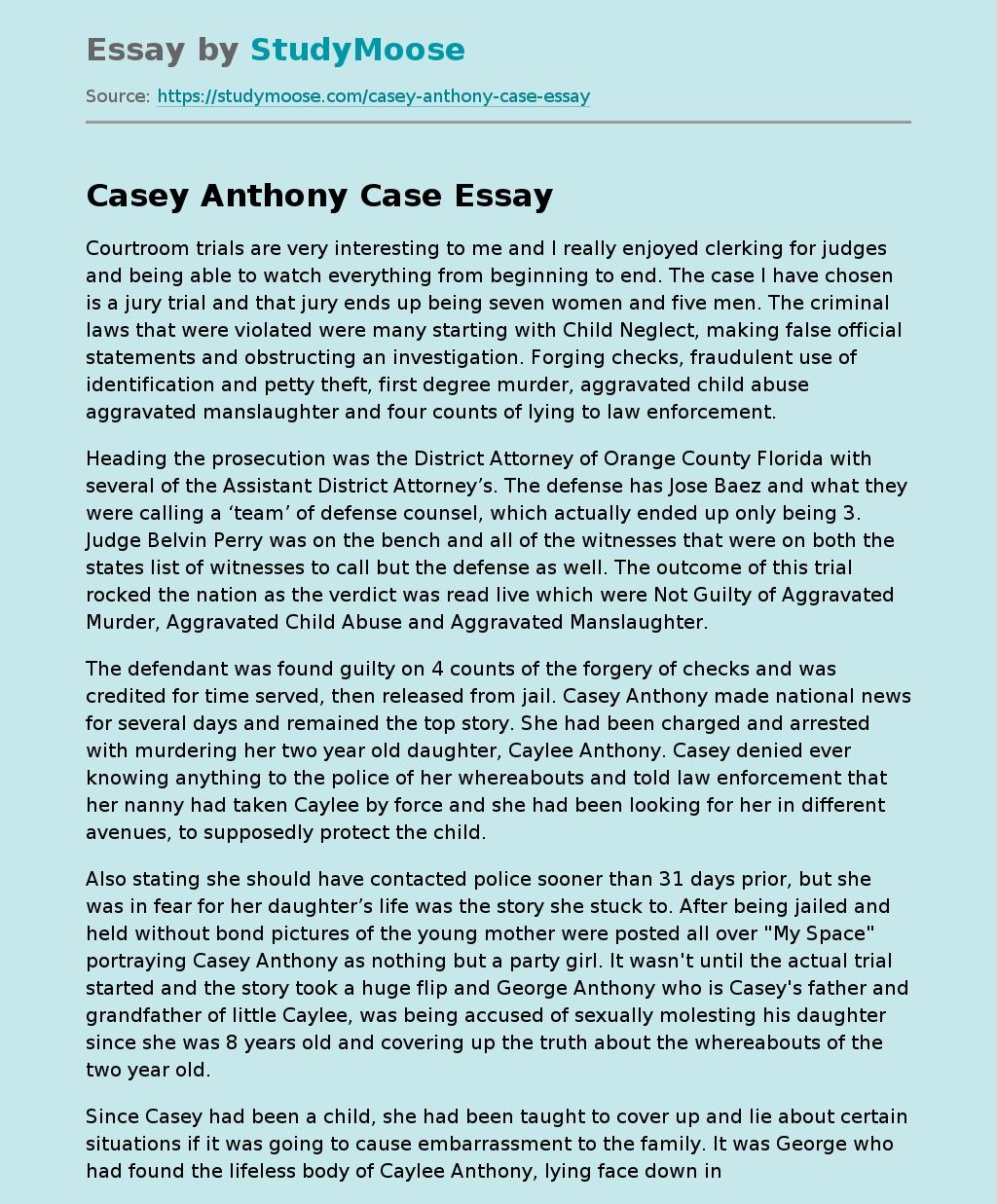