The ideas in Anthony Giddens’ “Runaway World” were initially presented at the 1999 Reith Lectures. Later on these ideas were further developed in a book with the same title. The lecture opens with a discussion on the nature of global change, in which Giddens specified his position on globalization in contrast to two commonly held views. These views being: (1) the sceptical view which posits that the globalization process does not exist and (2) the radical view which posits that the globalization process exists.

Turn in your highest-quality paper
Get a qualified writer to help you with
“ A Critical Analysis of Anthony Giddens’ “Runaway World” ”
Get high-quality paper
NEW! AI matching with writer

The former view which is forwarded by the sceptics doubt the reality of the globalization process.

Giddens argues that the radicals are the closest to being right in this debate, but that both sides are mistaken in treating globalization as primarily an economic phenomenon.

In response, he offers a different view. He states, “Globalization is political, technological and cultural, as well as economic. It has been influenced, above all, by developments in systems of communication, dating back only to the late 1960s”. In addition to this he argues that it is equally wrong to treat globalization simply as an ‘out there’ phenomenon, as one concerning ‘big systems’ which are far removed from the individual.

Rather, globalization is to be understood also as an ‘in here’ phenomenon which influences the most intimate and personal aspects of our lives.

Giddens proposes, for example, that the transformation of the traditional family system, coupled with the drive for greater equality for women, is part of a “truly global revolution in everyday life…whose consequences are being felt around the world in spheres from work to politics”. In addition to this, he further argues that globalization is not to be understood as a single, unilinear process, but as an array of complex processes operating in different directions at once. The reasons for such a claim are as follows.

First, globalization involves the “pulling away” of power and influence from local communities and even nations, and the establishment of a new “global arena”. Second, it “not only pulls upwards, but also pushes downwards, creating new pressures for local autonomy”. This movement is marked by the revival of local identities and cultures, but is also accompanied by the rise of new nationalisms. Finally, globalization may “squeeze sideways”, and lead to the creation of new regional zones either within or across the boundaries of nation states. Giddens develops these arguments through his discussion of risk, tradition and the family.

In the first of these discussions he argues that we are in the process of moving from a traditional world of external risk, in which dangers come “from the fixities of tradition or nature” to one of manufactured risk, in which new threats arise from our own intervention into nature. Giddens states, “Our age is not more dangerous – not more risky – than those of earlier generations, but the balance of risks and dangers has shifted. We live in a world where hazards created by ourselves are as, or more, threatening than those that come from the outside”.

These new global hazards lend the world a new degree of uncertainty, for manufactured risks, such as those attached to the production of genetically modified crops, have no historical precedent, cannot be calculated in full, and thus remain largely unknown. Giddens argues that this marks the emergence of a new ‘post-traditional’ age, in which we are forced to engage actively with the knowledge produced by experts, and make reflexive choices as to the risks we decide to take and the trust we choose to invest in others.

This is a key part of what Giddens terms “reflexive modernization”, since individuals and institutions are finally set free from the constraints of tradition and are forced to order and reorder their activities in the light of expert knowledge. There are two aspects of this process which are central to Giddens’ argument regarding globalization. These are as follows. First, this process is fundamentally unstable, for ‘The reflexivity of modernity . . . does not stabilise the relation between expert knowledge and knowledge applied in lay actions. Knowledge claimed by expert observers .

. . rejoins its subject matter, thus . . . altering it”. Second, while reflexive modernization liberates us from tradition, tradition itself does not simply disappear, rather it becomes a choice not a fate or obligation, meaning, in turn, that self-identity can no longer be derived simply from a given order, but has to be “created and recreated on a more active basis than before”. Furthermore, this process can never be completely stable, since self-identity is reflexive in nature, and is shaped by, while in turn also shaping, the institutions of modernity.

It is important to note that Giddens’ response to the uncertainties of this new world is political in orientation. He states, “Our runaway world doesn’t need less, but more government – and this, only democratic institutions can provide”. This argument suggests that greater control of high modernity can be achieved through further democratization of the world. In order for this to happen, however, Giddens argues that it is necessary to resolve the paradox inherent in a democratic setting.

This paradox is evident in the manner in which the globalization of democracy has been accompanied by increasing disillusionment with modern democratic processes. In order to solve this issue, Giddens proposes a democratization of democracy itself. Such a democratization process, on the other hand, involves the effective devolution of power, constitutional reform, greater transparency in political affairs, the fostering of a strong civic culture, and the pursuit of new transnational or global democratic forms.

Despite the Giddens’ refreshing take on the issue of globalization, his propositions as to how the problems that globalization presents the individual may be solved prove to be highly vague. Consider, for example, that despite laying down the possible means of solving the disillusionment within a democratic setting, his solutions are highly generalized and they fail to specify a direct mode of action that should be undertaken by the different government officials as well as the different individuals within such nations.

Despite of this shortcoming, the importance of Giddens’ argument may be traced to his stance regarding the issue. As was stated in the initial part of the paper, Giddens neither argues for the sceptics nor for the radicals but presents a conservative position on the issue of globalization. This position however may be classified as a radical form of conservatism. The importance of Giddens’ radical conservativism as can be seen in his views regarding globalization is apparent if one considers the following factors. First, Giddens’ views enable the repair of damaged solidarities.

This is based on the importance Giddens places on both autonomy and interdependence which enables personal and collective responsibility. Second, Giddens’ views recognize the central role of political life in affecting the social and economic domain. In a sense, one might state that Giddens recognizes the implications and effects of globalization upon both the public and private spheres of existence. Third, Giddens’ claim enables the development of policies which may protect the public domain through the enhancement of the individuals’ autonomy.

Fourth, Giddens claim enables the pursuit of dialogic democracy. Dialogic democracy is important as it “creates a public arena in which controversial issues – in principle – can be resolved, or at least handled, through dialogue rather than through pre-established forms of power”. Giddens’ emphasis on the creation of such a condition is important as it enables the growth of self help groups and social movements in an economic, social, and political atmosphere which is continuously in flux as a result of the globalization process.

Lastly, the importance of Giddens’ views may also be attributed to the emphasis he places on radical conservatism in confronting the issues that may arise as a result of the globalization process. Giddens argues that since globalization has enabled the merging of nation states and the non existence of national boundaries, it is necessary to develop a global order which is characterized by both toleration and dialogue in order to combat the different kinds of violent reactions that may develop as a result of the globalization process.

Within this context, one might note that the importance of Giddens’ article as it is presented above in its initial version and its version as a book may be traced to the manner in which Giddens emphasizes the role of governance in enabling the shift to a world order which is determined by globalization. BIBLIOGRAPHY GIDDENS, A. Beyond Left and Right. Cambridge, Polity, 1994. GIDDENS, A. Living in a Post-Traditional Society in U. BECK, A. GIDDENS, & S. LASH, Reflexive Modernization. Cambridge, Polity, 1994, p. 95 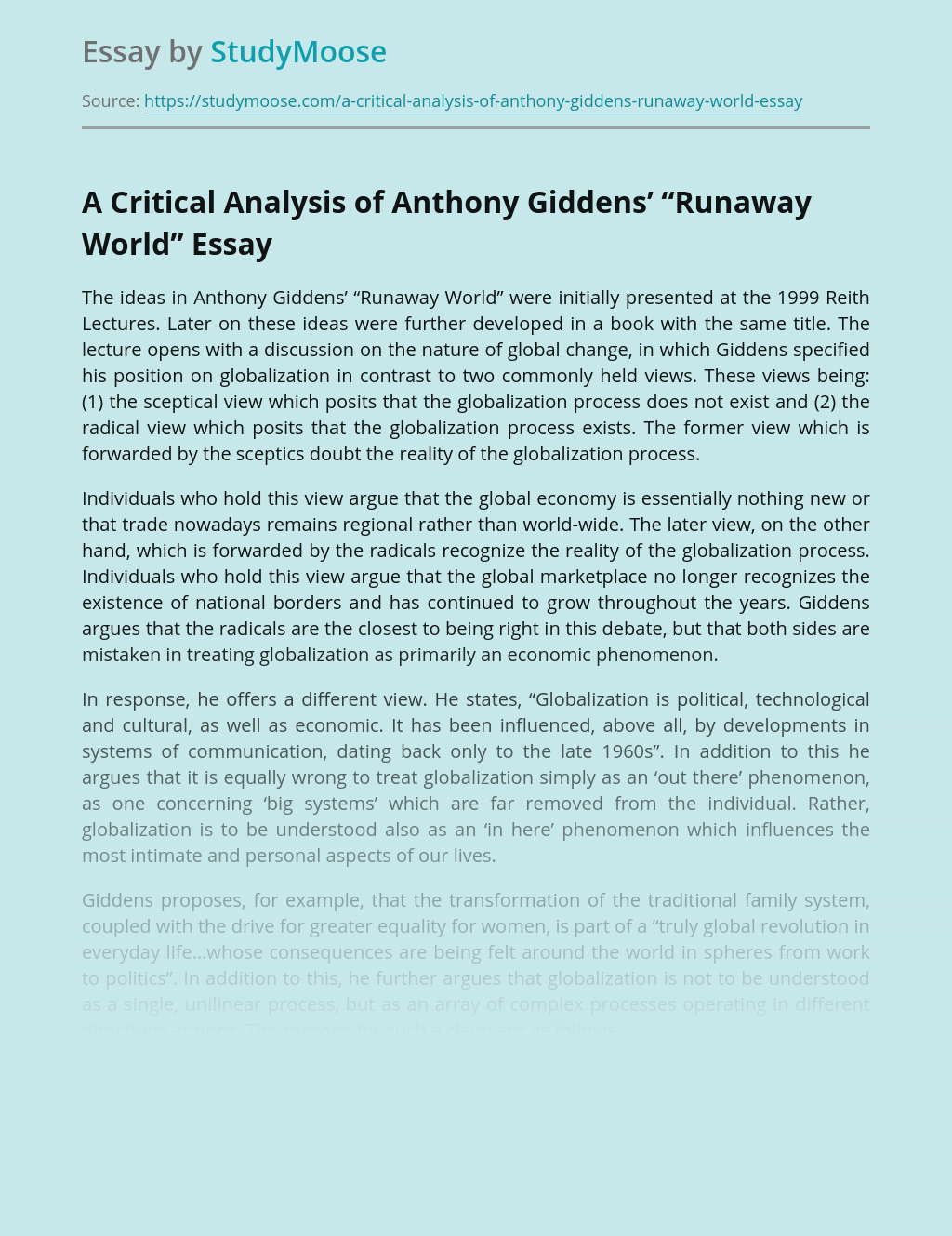 Turn in your highest-quality paper
Get a qualified writer to help you with
“ A Critical Analysis of Anthony Giddens’ “Runaway World” ”
Get high-quality paper
Helping students since 2015
Stay Safe, Stay Original