Judicial Precedent is another important source of law, it is an independent source of law, where there are no legislations on the particular point in statute Books, and Judicial Precedent works great. Judicial precedent has been accepted as one of the important sources of law in most of the legal systems. It is also a continuous, growing source of law. According to Salmond, the doctrine of precedent has two meanings, namely (1) in a loose sense precedent includes merely reported case-law which may be cited and follows by the court, (2) in its strict sense, precedent means that case-law which not only has a great binding authority.

Don't use plagiarized sources. Get your custom essay on
“ Judicial Precedent – Source of Law ”
Get custom paper
NEW! smart matching with writer

But must also be followed. There are variety of different views about the nature of judicial precedent. According to Jermy Bentham, Precedent is a judge-made Law while Austine calls it as judiciary’s law; Keeton holds precedents as those judicial pronouncements of the court which carry with them certain authority having a binding force. In simple words precedent means judge-made decisions which are used in further cases.

A judicial precedent is purely constitutive in nature and never abrogative. Means it can create law but cannot abolish it.

The judges are not at liberty to substitute their own views where there is a settled principle of law. They can only fill in the gaps in the legal system and so we can say that precedent means a case decided previously. Or precedent is any set pattern upon which future conduct may be based. Judicial precedent is a decision by a competent court of justice upon a disputed point of view which becomes, not merely a guide but an authority to be followed by all courts of co-ordinate or inferior jurisdiction and administrating the same system until it has been overruled by a court of superior jurisdiction or by a statute of superior authority, e.

It prevents error of judgment by individual judges, it prevents partiality on the part of the judges It helps lawyers to take a cautious view of the development of law on the basis of past judicial experience because of above all factors precedents are become achieve important place as one of the important source of law. Precedents can be classified into two categories: (1) Authoritative and (2) Persuasive. The authoritative precedent is one which has a binding force and the judge must follow it whether he approves it or not. Authoritative precedents are the decisions of superior court of justice which are binding on subordinate courts. For ex. Supreme Court, High Courts, Persuasive precedents, on the other hand, is on which the judges are under no obligation to follow but which they may take into consideration at the time of making decision. Now from all above discussion we are well able to understand precedent, how we discussed the position of precedent in real practice and its recent value in administration of justice. In the recent years, the value of the doctrine of precedent has become a debatable issue.

In England the importance of precedent is much more than in any continental country, that is why it is often said that judicial precedent is an unique feature of common law countries because the great body of the common law or unwritten law is almost entirely the product of decided cases and common law of England has been created by the decision of English judges and precedent is not merely evidence of the law but a source of it and the courts are bound to follow the law that is so established. House of Lords is the highest Court in England, its decisions bind all the inferior courts, the House of Lords itself is bound by its own previous decision but this position after a long controversy and various debates become change after the famous classic case. Boys v. Chaplin, 1968 IAIIER 283 and it is finally decided that as the House of Lords is the highest court in England, its decisions are absolutely binding on all inferior courts. But House of Lords is now not bound by its own earlier decisions and so nowadays House of Lords is not bound by its own previous decisions. In continental countries like Germany France, Italy, judicial precedent has only instructive value and it is not authoritative.

In these countries its importance is no greater than that of a textbook of law. In India judicial precedent has great value. The position of precedent becomes clear after 1950 and the doctrine of precedent gets a constitutional recognition. Art. 141 of the constitution provide that law declared by the Supreme Court to be binding on all courts, within the territory of India. It is clear from the wordings of Article 141 that the law declared by the Supreme Court is binding on all courts in India. But there after in various debates question arises that, whether the expression all courts include Supreme Court also. This question gives birth to various new views, that whether Supreme Court follows the British model of the House of Lords of ‘be bound’ or the U.S.A. Supreme Court ‘not be bound’. This question was first discussed by S.C. in the famous case. Now it is finally concluded from all forgoing discussion that the position of precedent from past to present is changed in vast dimensions and importance.

Value of precedent is now decreased to some extent and new concepts of prospective overruling has evolved to avoid the complications in vast changing society. In true sense precedents enable the judges to re-shape law according to the social need and at the same time the binding authority of the precedent acts as an effective check on the arbitrary discretion of the judges. Precedent helps common people to know about the intricate principles of law. Precedent helps Lawyers in their argument without waste of unnecessary time and energy whenever they want to cite any case-law. It also provides useful guidelines for the judges in deciding cases before them. But there are some contrary arguments towards precedent as Bentham did not recognize precedent as law at all because it lacks binding force of the state. Some critics argue that, statute law is more important than precedent, they say that, judicial precedents are published in law reports which are in such a large number that it becomes practically difficult to find out a particular case from such a voluminous legal literature and so it is very time consuming, they also contend that, at one time, different courts express conflicting opinions on the same point which renders the validity of precedent doubtful and uncertain and there is always a possibility of erroneous judgment in such a case.

Another objection which is quite often raised against precedent is that development of law through case-law more or less depends upon chance, because there is no test available for determining the validity of law made by precedent. Sometimes erroneous decisions of S.C. create practical problems for the subordinate judges as they are bound to follow these decisions howsoever wrong or defective. This adversely affects the growth and development of law in the right direction. But despite the aforesaid critical argument, judicial precedent has been as one of the important sources of law in most of the legal systems particularly U.K., U.S.A., Australia, Afro-Asian countries and India as the merits of the binding effect of the precedent (decision) it must be stated that it gives certainty and uniformity to law and brings about its scientific development and precedents always remain an effective weapon of shaping and developing law according to the needs of the changing society. 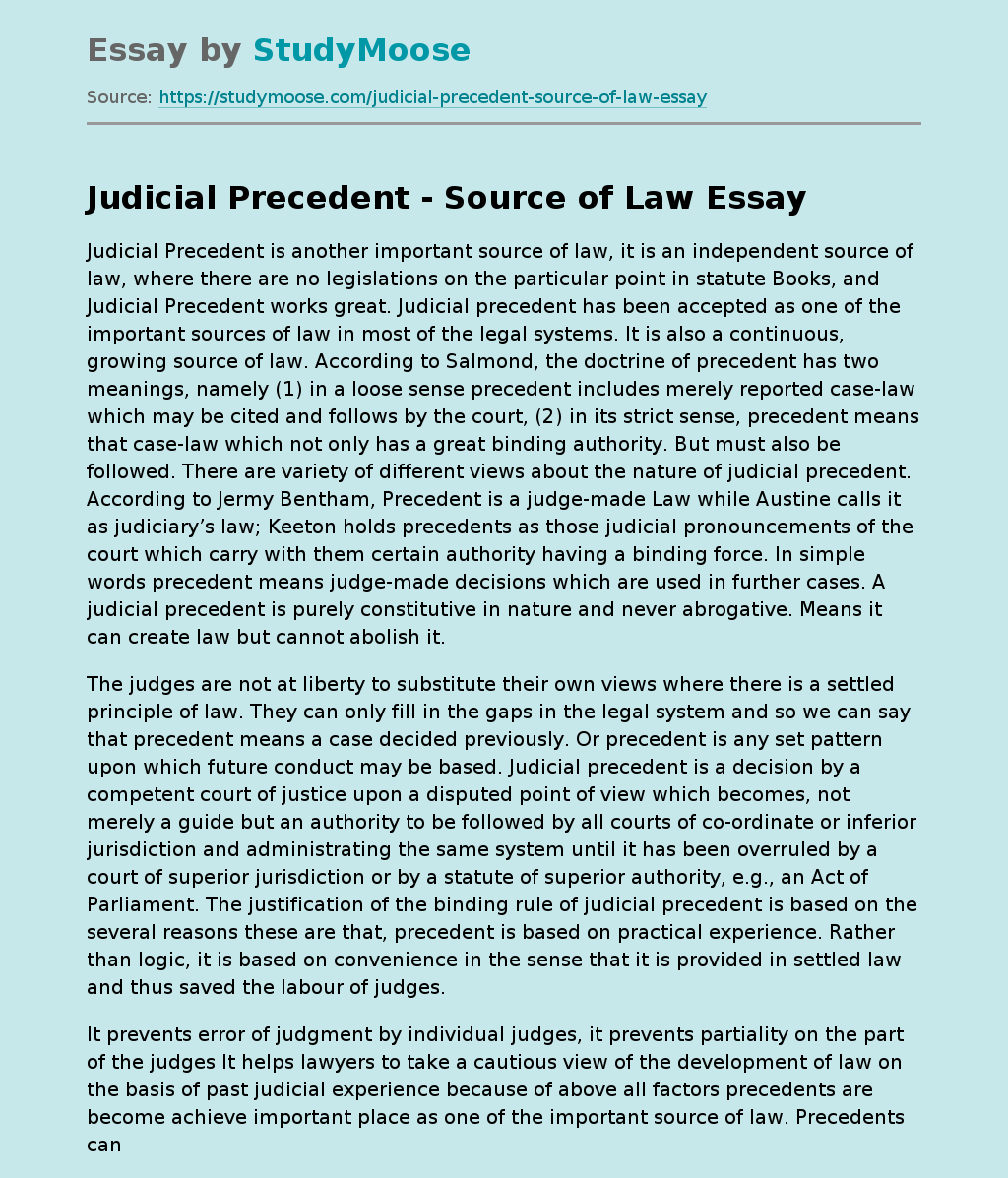