Metaphysical poetry necessitates the understanding of mankind but concentrates on topics such as romantic love, sexual love, faith, loyalty and religion. The poems are very short and have a formal tone, metaphysical poems are characterised by arguments and theories yet to be proved. It was written between 1572 and 1695, these were chaotic time as there were lost of changes taking place. For instance in 1577 there was the defeat of the Spanish Armada. The “Gunpowder Plot”, dissolution of parliament, civil wars and the plague followed this.

Don't use plagiarized sources. Get your custom essay on
“ John Donne’s “The Sunne Rising” and “The Flea” and “To His Coy Mistress” by Andrew Marvell ”
Get custom paper
NEW! smart matching with writer

These poets want to show off their intelligence and wit.

The poems usually contain conceits (these are sharp and unpredicted uses of metaphors and comparisons), for example: romantic lovers are compared to “a pair of compasses” (inseparable) and a woman losing her virginity is called a “flea bite”, as in, the little drop of blood women shed when they first have sex. The poems are supposed to be direct, dramatic and straight to the point. Sometimes, the poems have a “carpe-diem” theme.

Metaphysical poetry was seen as “shocking” at this time, it addressed issues that were previously unmentionable, or it looked at issues in a more controversial way.

In this essay I am going to compare the three poems; ‘The Sunne Rising’ and ‘The Flea’ by John Donne, and ‘To his coy mistress’ by Andrew Marvell and investigate how they are similar. First I am going to look at the themes of the three poems. There is a main theme running through all of the poems, love.

However, these are two different kinds of love, romantic love (‘The Sunne Rising’) and sexual love (‘The Flea’ and ‘To His Coy Mistress’). The Sunne rising was written at a time when men used to put women on a pedestal and admire them from afar, as if the men were not worthy of the women’s love.

But Donne’s facade is in bed with her! So this shows he is not a normal of their time. This poem is very romantic and compliments the woman a lot, says how he wants to be with her, that they are very special and there is no time like it when he is with her. The poet obviously wants to get this across and does it by using language that is in total awe of the woman. Throughout the first two verses of the poem there a few examples of this; “All here in one bed lay. ” Which is saying that all the riches in the world are with him in that one bed.

Also, “If here eyes have not blinded thine, Looke, and to morrow late, tell mee, whether both the India’s of spice and Myne Be where thou leftst them, or lie here with mee. ” Here, he saying to the sun, tell me if there is anything more beautiful. However, in John Donne’s other poem, which has a theme of a more physical type of love, he is trying to get the woman to sleep with him. To do this he uses a flea, and is quite blasphemous because he uses religion and the trinity. He makes many references to it during the poem, for example there are three stanzas and he using rhyming triplets at the end of each one. Yet this enjoys before it woo, and pampered swells with one blood made of two, And this, alas, is more than we would do. ”

Three also has another significance, because John Donne says there are three lives within the flea “three lives in one flea spare. ” The poet using themes is to try and persuade the woman to sleep with him and also so the reader takes his side in believing she should. In ‘To His Coy Mistress’, the poet is also trying to get a woman to sleep with him, but instead of using a flea, he uses a carpe diem (seize the day) theme to persuade the woman.

He uses both persuasive, “Time’s winged chariot hurrying near;” (which says time is chasing them so they need to hurry up) and complimentary techniques. The 1st stanza is full of hyper bole which is complementing the woman, for example “An hundred years should go to praise Thine eyes, and on forehead gaze. ” Which is saying he would stare at her eyes and face for a hundred years if there were time. The poet also makes references to death quite often in this poem, because he says that there is not a lot of time left and she should not want to die a virgin. “The grave’s a fine and private place, but none, I think, do there embrace. ”

There are lots of examples of language and poetic devices in the poems, some of which make the poems similar. I first looked at The Sunne Rising and broke it down into the three verses. There is a very direct opening and we read straight away that he is annoyed at the sun because it is shinning through their window and is about to wake them up. John Donne lets us know he is angry by him shouting at the sun and telling it to go away “Busie old foole, unruly Sunne, Who doest thou thus, through windowes, and through curtaines call on us? ” In John Donne’s other poem, ‘The Flea’, like I have said, he is trying to get a woman to sleep with him.

It is saying the flea has bitten her and therefore taken a small drop of blood and at the time when it was written it was believed that when you loose your virginity, you loose a small drop of blood. He is saying that she let the Flea bite her, so why doesn’t she let him sleep with her? He tries to make her guilty by saying she is letting the flea have what it wants but not him, “Yet this enjoys before it woo, And pampered swells with one blood made of two, and this, alas, is more than we do. ” In this poem, as well as his other one, John Donne makes himself look more powerful and intelligent than his opposition.

In ‘The Flea’ he says to the woman that she should feel guilty for killing the flea because it had all their blood in it, she replies that the fleas death was un-important and she doesn’t feel guilty. He then turns the argument by saying that if killing the flea was so insignificant then so will loosing her virginity. “Yet thou triumph’st, and say’st that thou Find’st not thyself, nor me the weaker now; Tis true, then learn how false fears be; Just so much honour, when thou yield’st to me, Will waste, as this flea’s death took life from thee. ”

John Donne also creates quite a lot of religious imagery in the poem, ‘The Flea’. He does this by using the idea of the trinity, there are three verses, rhyming triplets and also, he emphasises the fact that there are three lives within the flea because it has his blood, her blood and its own blood inside it because it has bitten both of them. “Three lives in one flea spare. ” He uses this against her and says that marriage is about the joining of blood, and their blood is already mingled within the flea so technically they are already married and therefore should not worry about having sex. Where we almost, nay more than married are. ”

Also, John Donne uses some religious words within his poem, such as cloistered and sacrilege, this helps to make him seem more powerful and better than her because she is going to commit blasphemy by killing the flea as it has three lives in it. “And sacrilege, three sins in killing three. ” Looking at ‘To His Coy Mistress’ I can see that the poet uses syllogism to try and get the woman to sleep with him. Each verse stages a different part of a 3-step argument.

The First verse is written in the conditional tense, saying if they had all the time in the world things could be different. The second verse is written in the future saying she will die. The third and final verse is written in the present telling her that she knows she wants to, “And while thy willing soul transpires” and that he is ready to do it “At every pore with instant fires. ” In conclusion, I think the main similarity between all three of the poems is the fact that all three have three verses and the structure is quite similar.

There are also a lot of similarities between just two of the three poems, I think the most important of these is the theme of sexual love in ‘To His Coy Mistress’ and ‘The Flea’. I, personally believe that ‘The Sunne Rising’ Is the best poem because of the complimentary language and the way he is kind to the woman, because in the other two poems, the men seem desperate and try to trick the women into thinking they should sleep with them, especially in ‘The Flea’ because of the way John Donne turns her argument around to suit him

John Donne's "The Sunne Rising" and "The Flea" and "To His Coy Mistress" by Andrew Marvell. (2020, Jun 02). Retrieved from https://studymoose.com/john-donnes-sunne-rising-flea-coy-mistress-andrew-marvell-new-essay?post 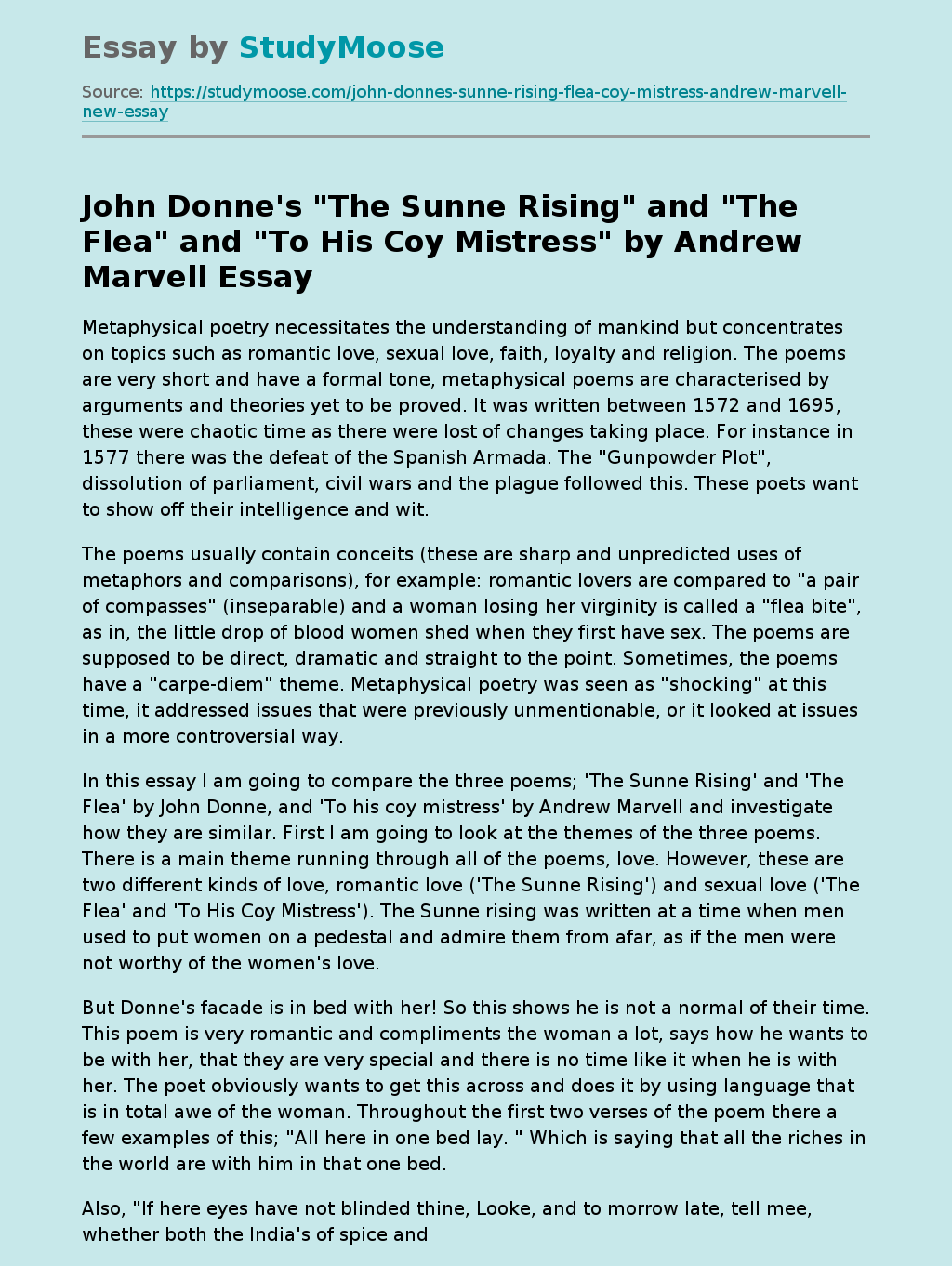