Islamic civilization which known as golden ages has a lot of contribution in mordent civilization. Islam is a religion which belief in one god Allah also encourages to gain knowledge from the creation of Allah. The last messenger of Islam Muhammad (May peace be upon him) advice his follower to seek knowledge. Islamic scientist and scholar had contributed a lots in mordent science starting from the medical science , mathematics , architecture , philosophy geography etc. from the two documentary “ Islam and science” made by BBC and “short film about 1001 invention” which described the contributions of Islamic civilization in the mordent world.

Turn in your highest-quality paper
Get a qualified writer to help you with
“ Islamic civilization ”
Get high-quality paper
NEW! AI matching with writer

First of all talk about the contribution of Islamic scholar in mathematics. The language of modern science still has many references to Arabic roots. If we discuss about scientific terms like Algebra, Algoriddim, alkaline this word as Arabic. There will be no mathematic or no physics without Algebra, no computer without Algoriddim, no chemistry without alkaline. Surprisingly few people in the west today even scientist are aware of this medieval Islamic legacy.

But it was not always so, from 12th to 17th century European scientism and scholars regularly refers to earlier Islamic text. European world realize that there way of doing arithmetic which is essentially based on Roman numerals which was hopelessly inefficient. Muhammad ibn-musa al-khwarizmi showed Europeans a batter way to doing arithmetic. In his book the Hindu Art of Reckoning he describes a revolutionary idea. He shows that we can represent any number we like with just ten simple symbols.

Which are Indian Arabic digits or symbols ١‎ to ٩ and ٠‎ and in English 1 to 9 and 0, by using this now we represent all the number we like. Al-Khwarizmi created the decimal points at time of translating Indian system to Arabic. By using this decimal now we can describe the fraction numbers not only the whole numbers. Islam always encourage to gain knowledge, prophet Muhammad Sallallaahu alayhi wa sallam, (May peace be upon him), advice his followers to seek knowledge. Abd al-Malik ibn Marwan one of the leader of Islamic empire 8th century (AD) select one common language Arabic to rule the Islamic empire. Selecting common language is not only for administrative connivance. He realizes the important to gain knowledge. As a result Abd Al Malik start collecting different books from other reason as, Greek, Persian and bring those books and translate to Arabic, this became known as translation period. To collect books Abd Al Malik send his messengers different part of the world and anyone who brought a book that he did not have , he repaid that person by its weight in gold. As a result of translation movement scholars, scientist, physicians in Arab empire was familiar or aware of the latest remedies, innovation, theories introduced by the other scholar from the far away as India and china.

The golden ages of Islam which is time between 8th century to 1258 when Mongol conquest of Bagdad. Through scholars and scientist of various faiths some of the most important discoveries known to man were invented in this time. Starting from the Islamic scholar Ibn sina , Al Zahrawi in medical science to Al Biruni who determined the size of the world. Al Rayhan Al Biruni successfully determined the size of the world by using his formula or method. To estimate the size of the world Al Biruni used the height of the mountain and the angle of dip of the flat horizon from the mountain. Ibn al-Haytham , whose idea led to the invention of camera. By explaining who our eyes work Ibn Haytham led the foundation for modern cameras. Abbas Ibn Firnas who is the first man in the history who believed that man can fly before many years before the Wright brother. On the other hand, not only the male scholar contributed or invented new technology in this golden ages. Beside all the male Islamic scholar there was a lots of female scholar contributed a lot by inventing new technology this period.

Merriam Al Astrulabi, she invented sophisticated astrolabes which show the sky and the stars on a small flat plate. This used by the navigators, astrologers astronomers for predicting the position of the stars, sun, moon etc. Abu-Ali Husayn Ibn-abdullah Ibn-sina one of the greatest Islamic scholar. In 1025 he completed Al-Qanon fi Al-Tibb (canon of medicine) in it he collected and expanded all that gone before him, medical idea from Greek to India and turns them into a single work. In this book he describe how human body works, how disease work in general, what are the causes for different disease. Another great scholar in Islamic empire is Abu Al Qasim Al Zahrawi , known as greatest medieval surgeon. Abu Al Qasim Al Zahrawi well has known for his book Al Tasrif and inventing several surgical instruments, which still use in the mordent medical science. In his book Al Tasrif which consists thirty parts and he describe different issues in medical science. The most important part From his book Al Tasrif where he describe different surgical treatment which include surgery of eye ,ear , removal of stone from bladder etc.

In conclusion, at the time of golden ages in Islamic civilization the scholar and scantiest in Islam contributed to science in a large extent. Which gave new theories, methods, scientific innovation in different field. Starting introduce new way to calculate the numbers, inventing instruments for doing surgery, who our boy work and cause of different diseases, determining the size of the world so on. Most of this theories and inventions are still using in the modern science. On the other hand translation period provide a great opportunity for the Islamic scientist to gain knowledge and use that knowledge to invent a new ideas. 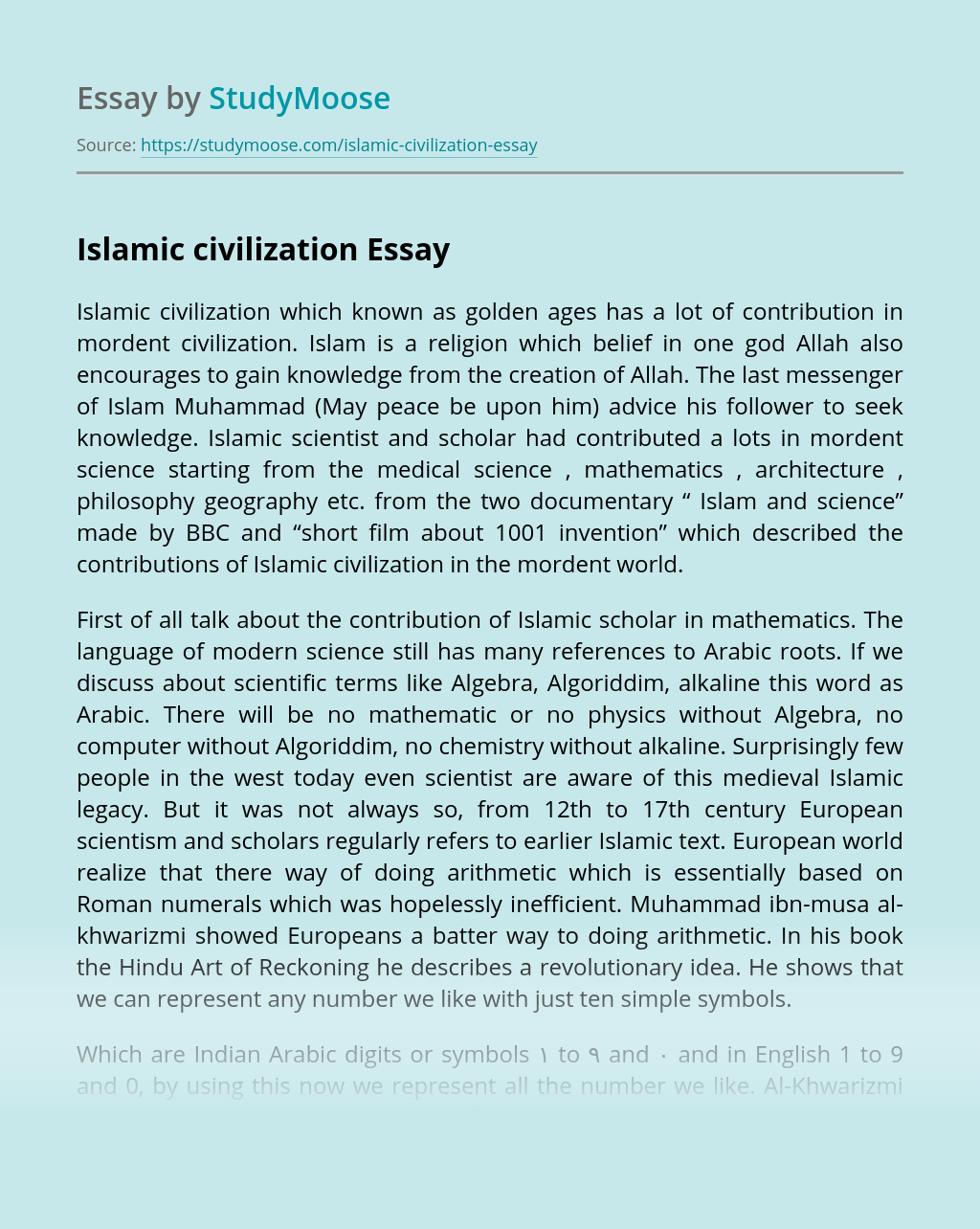 Turn in your highest-quality paper
Get a qualified writer to help you with
“ Islamic civilization ”
Get high-quality paper
Helping students since 2015
Stay Safe, Stay Original