The paper talks about the importance of the Quran and the Sunnah as the primary sources of Islamic beliefs, practices, and law, and their influence in Muslims daily life Islam. Islam is a religion that was originated when Prophet Mohammad (PBUH) began to spread the teachings of Allah (God of the followers of Islam) in the 7th century. God choose Prophet Mohammad as his last messenger and ordered the Prophet to spread his teachings and to ask everyone to believe in the oneness of Allah and the people who follow Islam are called the Muslims.

Don't use plagiarized sources. Get your custom essay on
“ Islam, Quran, Sunnah ”
Get custom paper
NEW! smart matching with writer

Quran is the book of God that was revealed to Prophet Mohammad through Angel Jibrael and the Muslims consider the book to be a very Holy Book of God that covers each and every aspect of life and the word Quran stands for recitation. It talks about everything a human being needs to seek guidance for and it tells the right way of how to live your life.

When the Quran was revealed, the language it was written in was Arabic, however, now the book is available in all translations so that people can read and understand the true context of the book well and can follow its teachings.

e. life after death. Quran does not force anyone to adopt the right or the wrong path but it does portray the negative and the positive aspects of the path the Muslims select.

As mentioned above, Quran is a complete book of guidance for the Muslims and it covers every aspect of life. To further explain this, I would give some examples of what Quran speaks of. Some of the very basics that Islam as well as other religions also ask the human community to do is to always select the right path that means they should not cheat anyone, they should not lie, they should not betray anyone or should not take the sue share of another person.

As said by the Quran and the Prophet Mohammad, the Muslims who will follow the teachings of Islam and implement the etchings of the Quran will always be successful in every way and the most important thing is that Allah (God) will also love such people and this would then result in the worldly reward or the reward of going to Heaven after death. When the Quran was revealed, the companions of Prophet Mohammad used to write down each and every verse of Allah and the Book was later complied and the text is still the same as it was when it was revealed.

The Muslims also believe that each and every word is the Book is the word of Allah. Quran is thus very important in shaping up the life of a Muslim and is one of the primary sources of Islamic beliefs. Other than the Quran, the Sunnah is also considered to be one of the primary sources of the Islamic believes. The word Sunnah basically refers to the path that Prophet Mohammad choose to live his life and it includes the traditions he followed, his actions and words, what he practiced. Overall, it basically the way he had chosen to live his life.

The Muslims also adopt the living style of the Prophet that includes his habits and style and the way he dealt with the other people. He was always considerate and caring, he always used to forgive others and he always used to be polite with others and this is what the Muslims must inculcate in themselves as well. The Quran also talks about Prophet Mohammad and has commanded the Muslims to follow what the Prophet has taught and to obey the teachings of the Prophet at all times. The significance of Sunnah is moreover also to please God by doing what His most loved Prophet did and to embrace his way of living. 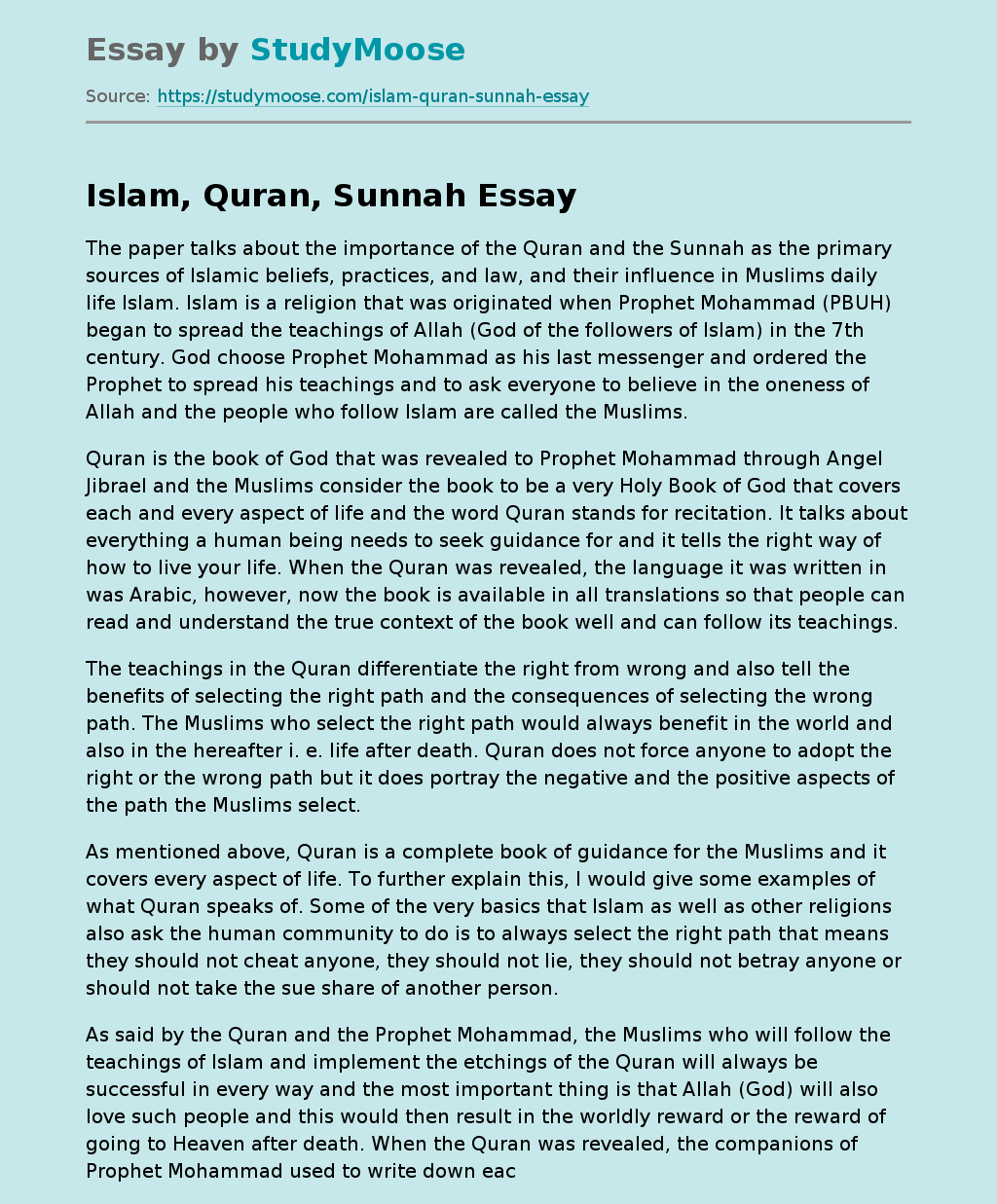