The Quran’s view of a good society

The Quran’s view of a good society is that the people shall do good unto others and speak to others and about others in a kind way. Society should be in constant prayer and also expected to contribute to charity. The Quran sets up basic guidelines for the people: on God/Allah, on Society, on Men and Women, on War and Jihad, and on Tolerance. The attitude towards the weak members of society is a great one; there are plenty of statements regarding being nice to the poor and unfortunate ones.

The view that they have of a fundamentally sound or “good” society is one that other nations should adopt. the Quran suggests that the Muslims accept non-Muslims and do not commence war with them. “For oppression is even worse than killing.” Muslims should speak in the most kindly manner to those who do not share the same beliefs.

If someone threatens Islam and Allah’s teachings, then the Quran gives the authority to Muslims to fight in God’s cause.

Fighting and warfare was common in this region during this time frame so it was important for the Quran to establish some guidelines for its followers. The birth of Islam brought out controversy because it was a new religion, so warfare was common. The circumstances surrounding the birth of Islam that might help to explain the references in the Quran to fighting and warfare might be the Holy Wars. Debates over the Quran could arise because of the instructions that are given.

Some Muslim might not agree with accepting other religions and in turn fight the opposing beliefs even though the Quran says not to.

Based on the writings in the Quran, we can assume that Muhammad is a man of good-will who gives back to others. He appears to avoid war at most costs unless he needs to fight for his beliefs. He is a charitable and humble man who gives back and pays respects to those less fortunate, and values his religion and is honest. These hadiths build upon the teaching of the Quran by further elaborating in detail of the more broadly expressed views of the Quran. They give the daily routines to effectively live the correct Muslim life centered around the Quran’s teachings. Religious and social values are highlighted in these hadiths. On men and women from Document 1 is referred to; these hadiths describe how men should act around women (not even allowed to look at a woman). As far as religion goes, the followers are expected to fast by day and pray at night.

These hadiths reflect the common themes of “the wisdom tradition” by talking about the people serving their institutionalized religious master. They are mainly Islamic in their teachings about giving back and treatment of their family and the less fortunate. Also, to live modestly is a recurring theme of the hadiths. But, in our society, many people give back and do good unto others and embrace their separate religions respectively.

If someone refuses to pat zakat, alms for the poor, and “denies its obligatory character,” they are put to death. I’m surprised by how much helping the poor is emphasized. These practices are reminiscent of socialist society. The document provides regulations to the religious aspects of society displayed in the Quran. Specific values emphasized in the Quran, like treat people nicely and do good onto others, are regulated by rules in this document, like those surrounding Zakat. Their laws have a direct correlation to the values of their religion expressed in the Quran. For example, it says, “marriage with an idolatress is forbidden, until she accepts Islam or a religion of the Book.”

The role of law in early Islamic civilization is to further enact their religion and make people follow the teaching of the Quran. This contrasts to modern Western society, which is secular. The role of law was very explicit because they wanted to outline exactly how people of Islam should act. The laws were put in place to make sure people are following the religion correctly, so no details were left out. The early Islamic community confronted problems stemming from authority over people’s personal romantic whims and wills. The laws prohibit men from showing that they are lustful of other women outside their immediate family. Also, very specific marriage laws are outlined. Islamic men could not marry women who were idolatresses.

Rumi views religion as more personal. God is in our hearts, not in lavish temples or anywhere else. He also states that we should fully devote ourselves to finding God His poems display Islam as more open and ready to accept newcomers despite their pasts. He also says that God is primarily in our hearts rather than in all the monuments and laws laid out to, in a way, “perfect” the way people observed Islam. They would criticize the Sufi that their belief is wrong because it is too focused on spiritual connection. The Sufis say that we connect to God only in our hearts, not through the structured religion and temples that the ulama focus on.

The Quran’s view of a good society. (2016, Aug 06). Retrieved from http://studymoose.com/the-qurans-view-of-a-good-society-essay 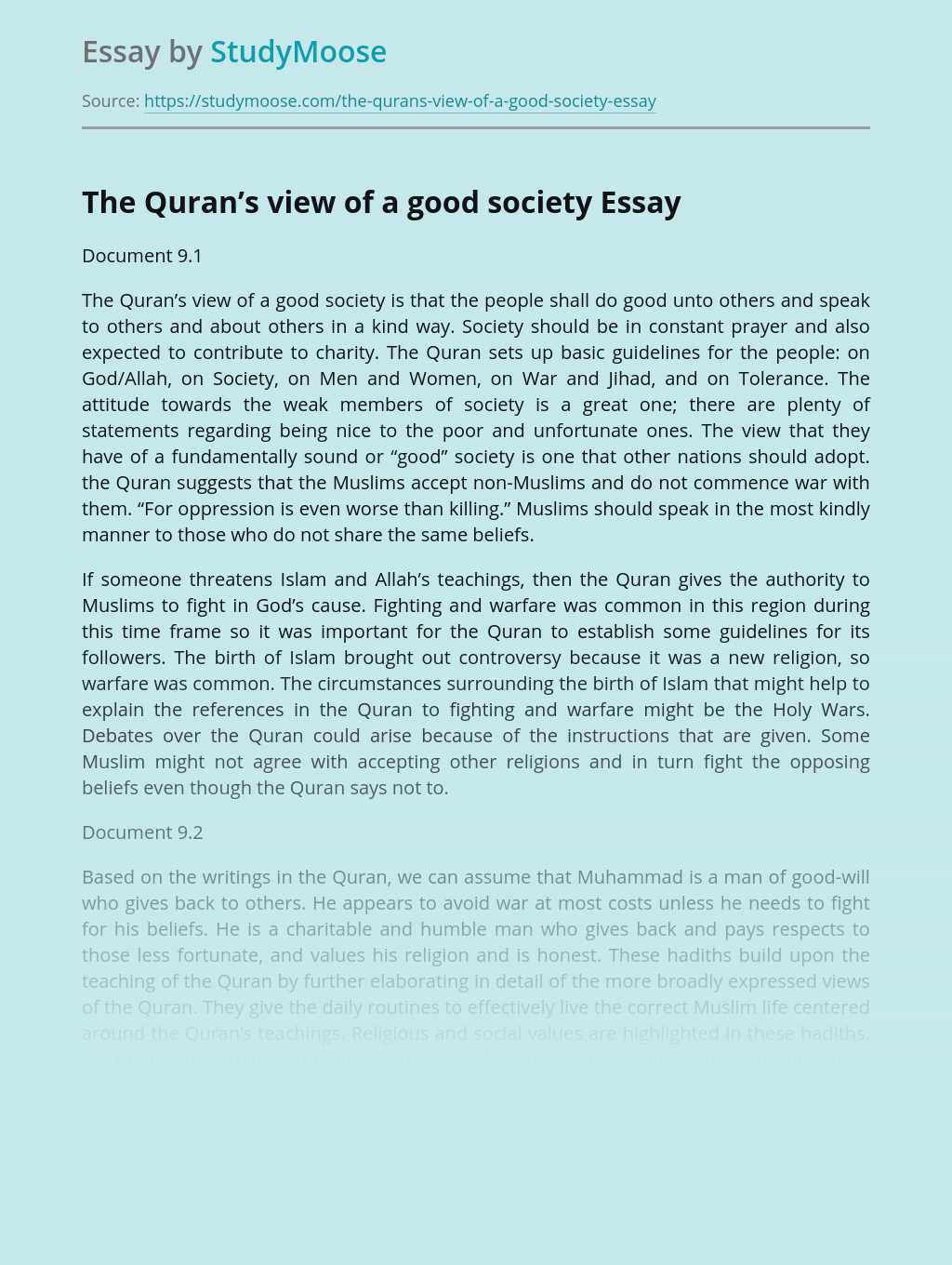 Don’t waste time
Get a verified writer to help you with The Quran’s view of a good society
Hire verified writer
$35.80 for a 2-page paper
Stay Safe, Stay Original