Is the Uk political system democratic?

“A government of the people, by the people, for the people.” The word democracy comes from the Greek words “demos” which means the people and “kratos” which means authority, or power. A democratic political system is one in which the ultimate political authority is vested in the people this means that all eligible citizens are able to participate equally either directly or through elected representatives in the proposal, development, and creation of laws that will change and shape everyday life. A democratic country aims to have an accountable government that serve the best interests of the people it is governing.

Don't use plagiarized sources.
Get Your Custom Essay on Is the Uk political system democratic? Just from $13,9/Page

The UK is a liberal democracy which ensures that citizens should be able to influence governmental decisions made. The UK’s governmental system contains no written constitution. This means that theoretically the government are free to pass any legislation as long as they have the majority in parliament which could be easily achieved if the party has a large majority of seats.

This means there is no safeguard for laws that can be altered or new ones that could be created.

This is very undemocratic as the government therefore have too much power. The government is also in possession of other powers such as the royal prerogative that allows the prime minister to go to war without consent from parliament. An example of where this was used was the Iraq war in 2003 which was heavily resented by a large majority of the public. The most important thing is that true democracy is participatory democracy, where members of the public are effectively members of the government by voting directly on policies. However this is difficult to administer and as a result most modern democracies are representative.

The public chooses who they wish to possess power and trust that person to devise policies that will benefit them. A representative democracy can easily become an elected dictatorship if the population’s views are not heard. Considering it from a purely political stance, democracy is power to the people, which establishes itself through the vote. We vote on members of the Commons but not on the Lords. We vote on local representatives but not party leaders. We vote on people but not policies. We vote people into Parliament but not out of it. We vote for a particular party but our second choices are not considered. We vote on only that which we are asked to vote on. We cannot ensure policies are maintained throughout a ministerial term by our vote.

Evidently our democracy is far from flawless, and this is not even considering the social aspects of its meaning, i.e. the extent to which we are free police barraging of public protesters and Rupert Murdoch’s mass media control showed us that we are not quite as free as the democratic terminology seems to suggest. You could say that the UK can be made more democratic through a proportional electoral system, compulsory voting, a removal of unelected members of Parliament and more referendums. But it seems in these examples, more democratic is inversely proportional to more efficient.

Proportional electoral systems may confuse voters and will result in less strong government, compulsory voting would cumber us with the careless votes of those uninterested in politics and therefore would not be an accurate representation of what the population wants a removal of unelected members of Parliament may increase political bias and reduce the expert value of the Lords. Referendums may be subject to people who do not know what is best for the country, and even then only those who set the agenda of democracy can be understood as a process of people governing their state and managing community affairs all together, based on consensus.

The UK is in many ways not democratic. Firstly, the UK amongst many other countries claims to be a democracy. This would suggest that UK citizens have effective influence over government and over decisions that affect them. However there has been much controversy over this claim some arguing that power lies in the hands of just a few and others standing by the allegation that power in the UK is widely distributed. Secondly, First Past The Post has had a big impact on UK democracy.

The system we use to elect our MPs has a real impact on how politics works in The UK. It has a direct effect on whether politicians truly represent us and whether we can hold them to account if they let us down. The defeat of the 2011 Alternative Vote (AV) referendum means it is now more important than ever to discredit our failed system and we are continuing to build the case for change at Westminster.

This in turn means any of our votes just don’t count. Millions of people have no chance of deciding who their MP will be. And our votes are wasted by the system. Additionally, parties continue to focus all their time, money and effort on a handful of ‘marginal seats’, so just a few thousand voters can decide who runs Britain. As Jean-Jacques Rousseau highlighted in The Social Contract democracy in its political sense can only be efficient when the general will of the people is the same as each and every individual will.

Here he argues that this can only be achieved through a classless society with censorship and civil religion. As democracy in modern society is now taken to be equal to freedom its efficiency as a political system is halted by its connotative meaning. This means Rousseau’s method of effective and true democracy would be considered undemocratic in the modern world. Britain may not be truly democratic but it is as democratic as it can be whilst maintaining the constancy and competency of its political workings.

Is the Uk political system democratic?. (2016, May 18). Retrieved from https://studymoose.com/is-the-uk-political-system-democratic-essay 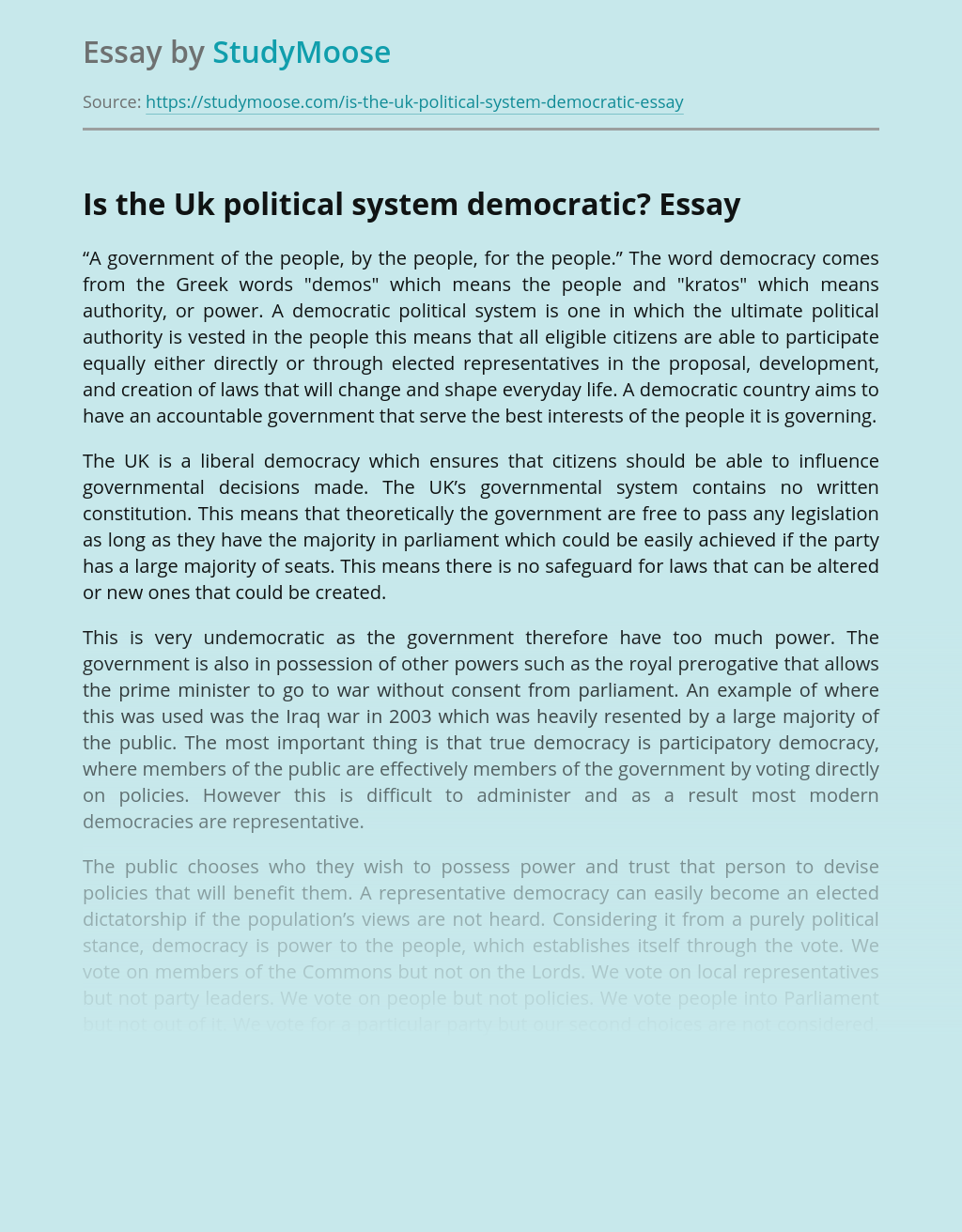 Characteristics for good governance in Afghanistan

On Friday, 20 January 1961 freshly elected President John F. Kennedy delivered his Inauguration speech to the nation of America in the time of unpredictability and fear. Kennedy was the “youngest chosen president and the first Roman Catholic president”. Throughout this turbulent period the Cold War was at its peak and threats of nuclear power...

View sample
Get Essay
The Origin Of Civil Society

After Aung San Lin’s death, the family moved to a house by Inya Lake where Suu Kyi met people of very different backgrounds, political views and religions. Suu Kyi’s mother, Khin Kyi, gained prominence as a political figure in the newly formed Burmese government. She was appointed Burmese ambassador to India and Nepal in 1960, and Aung San Suu Kyi followed her...

How the Political Typology does, doesn’t describe me accurately After looking at my results of the survey, seeing how they placed me and looking more into the category in which I was placed and believe it is very accurate. The survey marked me as a New Coalition Democrat, the definition of their party is strongly...